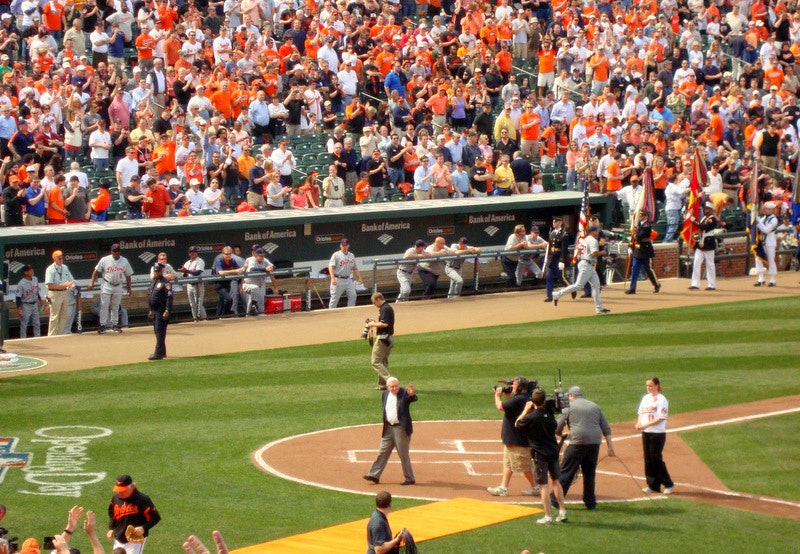 Monday was a glorious day in Baltimore. It was a gift from the baseball Gods, those arbiters of hardball karma. If anyone was due for some retribution it was the forlorn baseball fans of Baltimore. The sun was shining, the weather was more like June than early April, sailboats crowded the Inner Harbor and throngs of orange and black clad fans filled the streets leading to Camden Yards. I try to make it to Opening Day at Camden yards every year. Even throughout the agony of the past 13 seasons Opening Day is always the one occasion where the ballpark is filled to capacity and a glimmer of hope exists for a promising season. Hope is usually wiped away by mid-April, but the memories live on.

On Monday I took my father, father-in-Law and four-year-old son to the game. It was the first time the four of us had attended a game since my son’s first O’s game that came when he was about eight months old. My Dad and I have attended numerous Orioles openers over the years; couple that with the fact that I never knew either of my Grandfathers; and that made Monday a very special day for me. I hope that in the years to come my son will have some memories of that day.

In recent seasons Opening Day in Baltimore has been less about baseball and more about a reason to skip work and get faced before noon. There was still plenty of that going on this year. The watering holes adjacent to the ballpark were packed as usual but there was a different feel to the frivolity. There seemed to be a general sense of celebration.

Last year, on Opening Day, O’s reliever Mike Gonzalez was booed mercilessly by the home crowd. He had blown two saves in Tampa to start the season and many of the fans who had spent the morning over-indulging sure let him have it. Personally I didn’t like the booing. I thought it was a classless way to welcome a player to his new team. On a positive note at least those people cared enough to boo.

There was no such booing on Monday. In fact, all of the O’s offseason additions were cheered heartily with the loudest ovation saved for manager Buck Showalter. I thought it was very fitting that Earl Weaver threw out the first pitch to Showalter. It was symbolic and probably a bit corny to an outsider, but that’s baseball. History and tradition are deeply seated in baseball’s culture. Seeing the Earl of Baltimore literally handing over the baseball to Showalter gave a sense that all was right with the Orioles.

I don’t want to get all hung up on a bunch of BS about the return of the “Oriole Way,” and all that it entails. The team scouted and drafted young talent, developed them in the minors, promoted them when ready and watched them succeed in the majors. The fact that the current rotation includes four young pitchers that were developed in the Orioles farm system is significant. Gone are the days of Adam Eatons and Omar Daals filling out the big league rotation. Those guys were cannon fodder for the deep lineups of the AL East.

Jake Arrieta, Monday’s starter, was impressive in the way he challenged Detroit’s thumpers Miguel Cabrera and Victor Martinez. In the top of the first Cabrera batted with a runner on second and one out. I assumed Arrieta would nibble and ultimately walk Cabrera. Instead he challenged Cabrera, going to a full count before retiring the slugger. Cabrera batted twice more on the day with runners on base and each time Arrieta went right after him. In years past, and with managers past, Oriole pitchers would typically fold in those types of pressure situations. Showalter and pitching coach Mark Connor have clearly instilled an aggressive attitude with the young hurlers. Throw strikes, trust the defense and make the other team beat you. Showalter’s aggressiveness was also on display on the bases as Matt Wieters scored the game’s first run on a passed ball and Felix Pie was sent from first on a hit and run with JJ Hardy at the plate. Showalter was rewarded when Hardy smoked a double down the third base line and both he and Pie scored moments later on Brian Roberts’ three-run jack.

The game ended with the good guys on top; a 5-1 win that prompted my son’s request to celebrate with some pizza. We never want to read too much into one game, or four for that matter. (And on Wednesday night, the Tigers’ Justin Verlander presided over a 7-3 win, to snap the streak.) I predicted the O’s to win 78 games this year and regardless of whether they reach or exceed that total the team has clearly shown that they will not beat themselves. The Orioles no longer appear to be in the business of giving games away or bowing to opponents. Monday afternoon was a glorious reminder of what Baltimore baseball was, and could be again.