An interview with The Bow-Legged Gorilla, one of the most idiosyncratic musicians in Baltimore 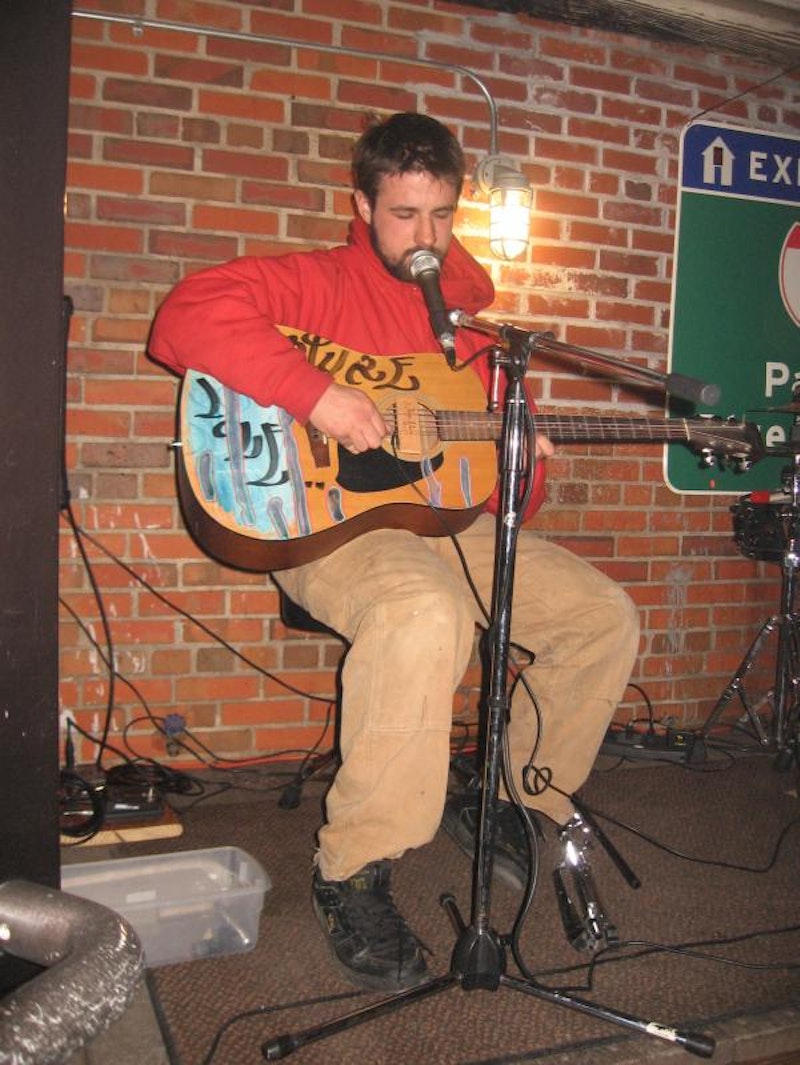 Kenny "The Bow-Legged Gorilla” Johnston is one of Baltimore’s most unique and enigmatic young musicians, marrying acoustic guitar with beatboxing and an assortment of other vocal styles for a sound that’s utterly his own. He tends to e-mail fans and followers every few months, announcing shows or plans to tour, and during his last mass mailing in January, he added, intriguingly, “I also have my chainsaws with me so if you need any treework done let me know.” Later on, after he began his latest trek across the country, I caught up with Johnston over the phone to discuss his creative process and his unusual approach to music and, seemingly, everything else.

SPLICE TODAY: Where are you right now?

ST: So you're just picking up gigs as you can find them?

ST: Do you fly by the seat of your pants and take gigs as they come since you can travel by yourself without a lot of gear?

KJ: Well, I just wanted to spend most of this winter on the west coast, so if I don't find any work soon, I don't think I'm gonna be able to stay out here. I'm not very good at booking tours, just because I can't really play places that need a big draw, it's hard for me to get gigs for some reason.

ST: So you mentioned in your e-mail that you also cut down trees?

KJ: [laughs] Yeah, I mean I'm lookin' for work, I got ads posted on Craigslist, I'm about to start workin' for some tree company, that's just what I do.

ST: Have you gotten to tour nationally a lot?

KJ: I toured the country last winter, I've traveled the country quite a bit. I think I'm just pretty unorganized as far as web presence, stuff like that, and that's kind of what being a musician really demands today. I'm more of a "you gotta be there and see it" kind of musician.

ST: Yeah, your live show is definitely your signature and it might not have the same impact on a record or a website like it would in person. The first time I saw you perform and bought music from you, it was a double CD with homemade packaging with no song titles or information on it. Is that a proper album or just a loose collection of recordings?

KJ: I have about five records of my recordings, they're all self-released, it's nothing studio recorded or anything.

ST: Do you have ambitions to do studio recordings or do you like keeping things lo-fi and self-recorded?

ST: It does seem like the touring has made an impact, I’m always surprised to find that people in other parts of the country sometimes know your name and remember your performances.

KJ: Yeah, that's good to know. It actually bothers me, I just get pretty anxious, I put so much effort into just doing this artwork, and I just have very little to show for it. But I guess that's like every artist's sob story.

ST: Do you have a large repertoire of material you draw from or do you play pretty much the same set for a while?

KJ: I write about two songs a year. All of my songs are usually over 10 minutes long and they always have interesting dynamics, change of tempo, different uses of mouth percussion, bass notes. It's all in my mind, so it takes me quite a while to write a song, so I've been writing two songs a year for the past...eight years.

ST: So your set changes slowly but each song is kind of a large piece unto itself. Do you feel a progression or pattern in how the new material differs from the earlier stuff?

KJ: It's not dramatically different. The only thing is, I think, that it's getting a lot more composed, technically. Not technical like... I guess my music is pretty simple, there's not too many notes, but choreographing or writing mouth percussion and guitar parts. The only thing is recently it's more Asian influences, more Japanese music.

ST: In terms of the melodies and how they're formed?

ST: Is that just what you’ve been listening to a lot?

KJ: Yeah, I've been listening to a lot of classical Japanese music and Chinese music.

ST: Do you set out to have these long 10-minute songs or do they keep growing longer and bigger as you work on them?

KJ: I kind of set out to have them, I like a song to be kind of like an experience, personally I like to just listen to one song per day. I want it to be like reading a short story with peaks and valleys, some of my songs are more like storytelling.

ST: It’s funny how these days when a musician plays a really long song, people tend to frame it in terms of being indulgent or pretentious or meandering, but there’s also that folk tradition of songs that span a greater length of time because they’re following a narrative. Do you think of your music in those terms?

KJ: Yeah, I would like to think of it as a meditative experience, usually I like stories when, like, someone's getting pulled out of a bad experience. My songs are generally kind of pretty manic depressive, sometimes very happy and sometimes very scary.

ST: In terms of the emotional tone of the song?

KJ: Yeah. A lot of times, when I play, I kind of wanna sound as post-apocalyptic as possible and as ancient as possible at the same time, a lot of times I pretend I'm some kind of alien, extra terrestrial folk singer. I’m kinda nerdy.