Suspicion of a new transportation start-up. 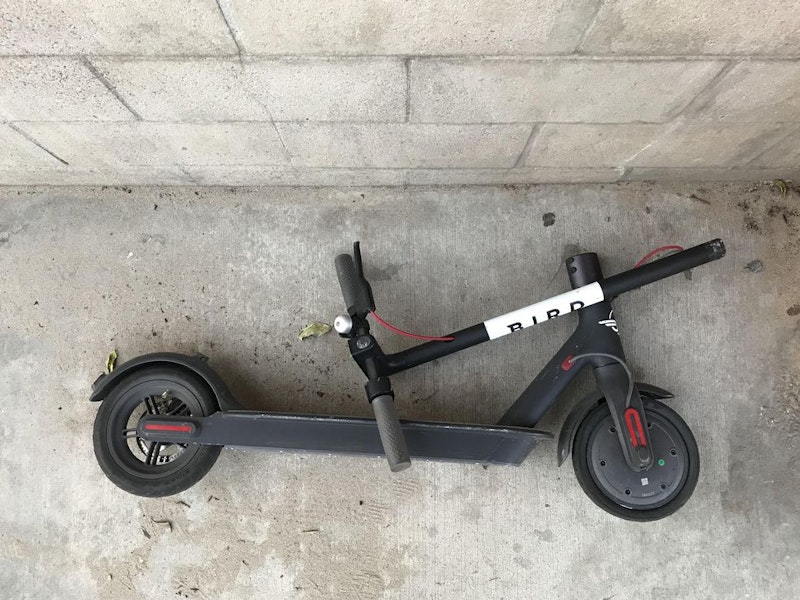 Yesterday morning I got an email from Nextdoor: “Bird scooters have arrived.” It was like an invasive species announcement. They’ve spread like cicadas, hatched from the earth and instantly ubiquitous. The first time I saw a Bird scooter was about a month ago: I turned a corner on my way to work and there was a scooter posted up in the middle of the sidewalk. I did a double take and froze like a deer, as if it were about to attack me or give me a tutorial on alternative energy that I never asked for. I don’t know anything about this company, where they’re based (Santa Monica, but you’re forgiven for assuming every one of these awful companies rises out of the San Francisco Bay and into Silicon Valley), what their “mission” is, or when they started, but they’ve achieved total market saturation in a matter of weeks here in Baltimore. Last Friday I saw at least a dozen Bird scooters out in the wild, people racing past me or pissing off people in cars at brutal intersections.

I’m automatically suspicious of any transportation startup—no need to re-hash my hatred for Uber, Lyft, and all other ride share companies, but I will anyway. Fuck them for decimating the taxi industry, flouting labor laws, disregarding regulation, letting people drive without training or independent registration and licensing, and surge pricing. It’s disgusting, but I know it’s a losing battle. I don’t expect any tech company to be responsible, but I’m still amazed (in the worst way) how quickly people on the East Coast gravitated toward Uber and Lyft.

Baltimore isn’t Manhattan, but we have a great Yellow Cab company here. I use cabs almost every day and can get a ride quickly, either by calling or through the Z-Trip app. Everyone tells me that Yellow Cab never shows up for them, so maybe I’m just getting special treatment for being a frequent customer. In any case, I understand why ride share apps are popular and necessary in West Coast cities or places like Houston or Miami where the sprawl just isn’t walkable.

A couple of things I like about Bird scooters: they don’t have a goofy ass name with no vowels or stupid spelling. Maybe they tried “Byrd” and Roger McGuinn sent them a cease and desist. More importantly: they’re not displacing anyone. There aren’t scooter unions all over the country full of immigrant and POC drivers that are losing their jobs or being forced to work more hours for less money under the tyranny of the Bird scooter. I had a Razor scooter when I was a kid, so I suppose I could use one (pretty sure I’ve done the impossible and forgotten how to ride a bike). Looks like they’ve had a lot of problems though.

Bird isn’t screwing over individuals or unions, they’re pissing off cities and regulators: “[C]ontroversy erupted over riders on sidewalks and the clutter created by parked scooters. San Francisco officials impounded hundreds of scooters, and pledged a permit program meant to limit the number of the vehicles while keeping a tighter grip on parking and safety problems.” People aren’t riding these with helmets, and someone is going to get killed sooner rather than later, but that’s the risk you take when you ride a fucking scooter in traffic without a helmet. Ride on, bird brains.