Nothing has changed in The New York Times’ semi-annual boilerplate survey of our “quirky” city. 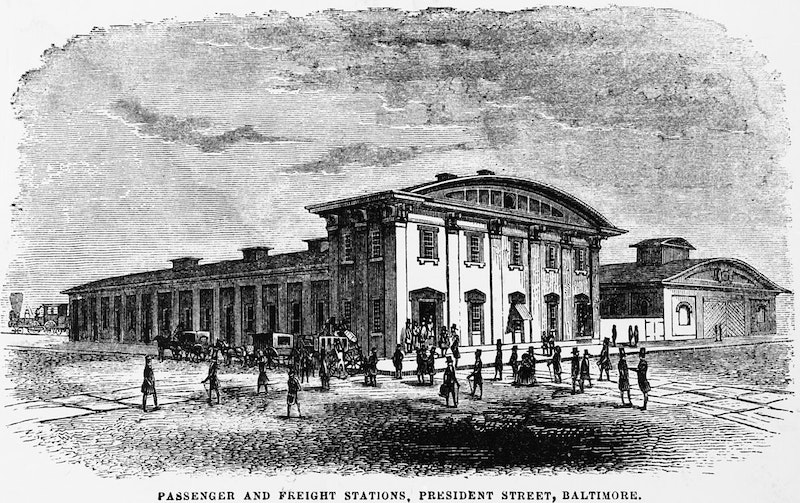 Last month, Andrew Martin wrote a piece for The New York Times Style Magazine headlined “Why Baltimore Persists as a Cultural Beacon” that leads with two paragraphs about… John Waters. Waters’ excellence and influence go without saying, and his place in the pantheon of American cinema was cemented decades ago. But he hasn’t made a movie in 15 years. Waters may be “Baltimore’s ambassador,” but he’s been busy curating his legacy since A Dirty Shame came out and Fruitcake foundered after the financial collapse in 2008. He has his books, but mostly we see him on talk shows, on stage, at readings, signing books, giving interviews.

Martin then jumps to David Simon, whose seminal series The Wire ended over a decade ago. The third Baltimore artist Martin spotlights, Anne Tyler, isn’t even a Baby Boomer—born in 1941, a member of the Silent Generation, a prime example of what keeps Baltimore a “persistent cultural beacon.” What?

Of course Martin was born and raised in Columbia, MD, and of course he only travels to Baltimore (and its “surroundings”) “every year or two.” Good God, why can’t the Times get someone like D. Watkins to take care of their semi-annual “Baltimore is cool!” quota? He’d write a much more interesting puff piece, and insightful instead of more nonsense about crabcakes and Cafe Hon. Even more galling is the boilerplate analysis of The Wire: “Simon’s gimlet-eyed take on the city is always one of dichotomies and revelations: The drug dealers are philosophers, the police brutal poets of vulgarity. Nothing is ever just one thing.” Except this piece, which is one thing: shit.

Martin buries Baltimore’s contemporaries halfway into the piece, perhaps at the behest of his editors who needed three white artists (who haven’t been productive or relevant in years) profiled above black Millennials like musician Abdu Ali and photographer Shan Wallace (Butch Dawson and JPEGMAFIA, who just played Coachella, are inexplicably in the second to last paragraph). Martin admits, “The current vein of work being produced” in Baltimore is mostly by black artists, yet he paraphrases Ali elucidating Baltimore Club, K-Swift, Miss Tony, and even Ali’s own party/concert series Kahlon. Ali’s only direct quote comes at the end of that paragraph, explaining that the impetus to start Kahlon was going to majority white shows that, “didn’t reflect what the city really is, and what brings charm to the city.” And then it’s back to John Waters talking about his condo in New York.

It would be a tedious and masochistic exercise to go through and reprint Martin’s moldy and insulting flowery nonsense about “the handmade quality, the risk taking, the defiance” of Baltimore. Articles like this are evergreen page-fillers, but Martin’s is especially stupid because it has the voice and the depth of a high school term paper written and turned in three days late. I don’t need a superficial education on the riots of April 1968, and I really don’t have time for outside analysis of Freddie Gray’s murder in 2015 and its aftermath in the city.

I’d like to know who does need this: Loaded art dealers? Silicon Valley? Old money yentas? I saw how wildly misrepresented Baltimore was in the media that spring when I visited relatives in California who asked me with eyes wide how I was “coping.” Any article written by an outsider about Baltimore—and Martin is an outsider, despite being born in Columbia (really more of a D.C. suburb)—must foreground what defines the city: the de-facto segregation of its geography.

Anyone who’s lived in Baltimore longer than six months—and isn’t a student at Hopkins or MICA, where they implore kids never to leave campus otherwise they’ll be raped, murdered, or skinned alive—knows that its tale of two cities is impossible to miss when you have neighborhoods like Bolton Hill abutting Druid Hill, or gated Guilford guarded against lawless Waverly. Martin isn’t a good writer, but even worse, he’s incurious, and rewrites the same nonsense about the “weirder edges” of Baltimore instead of enlightening readers of the Style Magazine about what really makes Baltimore what it is: segregation. But that doesn’t go so well with poached eggs and Bloody Marys in the Hamptons.