When the Trump furor dies down, the city’s still stuck with a dysfunctional government. 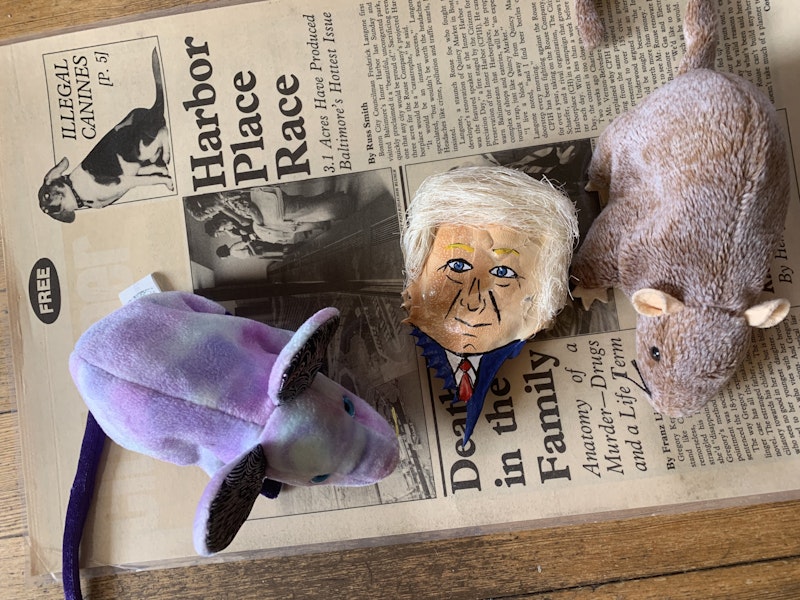 Let’s be honest: President Trump’s ugly, inaccurate and typically mean-spirited tweet last Saturday about Rep. Elijah Cummings (D-7) in particular and the city of Baltimore in general was, inadvertently, the best publicity the 600,000-population city—where I live—has received in years. While some undisguised bigots and Trump lemmings cheered the description of Baltimore as a “disgusting, rat and rodent-infested mess,” (I saw a lot more rats when I lived in Manhattan) far more citizens woke from a slumber to refute the characterization as “racist” and political payback for Cummings’ wise condemnation of the President’s noxious Xenophobia.

The flap—and considering the sheer volume of Trump’s Tourette’s-like tweets, that’s what it was to him—was lapped up not only by a liberal-leaning media that foolishly reports on Trump’s every ham-handed statement, but thousands of people who live here, have visited the historical landmarks, and suburbanites who may or may not at one time have resided here, although probably not in West Baltimore, where violence is an everyday occurrence. The hashtag #WeAreBaltimore instantly appeared. I was mildly surprised that the refrain “We Are All Baltimoreans Today” didn’t make the cut.

Had Trump wanted to address Baltimore’s countless problems—which he didn’t because he doesn’t give a fuck about a city that’ll never vote for him—he would’ve pointed a finger where it belongs: Baltimore City’s corrupt, at worst, and complacent, at best, local government, from the mayor down to the City Council and state delegates and senators whose districts are here. Some dopes on social media made hay by pointing out that the government is run by Democrats, which is missing the point, not only because most big cities are, but also because there are similarly ravaged parts of the country under Republican control.

However, the largesse (in tax breaks and sweetheart deals) lavished on corporations who’ve set up shop in the Inner Harbor and points further east rather than investing in parts of the city that really need help is unconscionable. The boarded-up houses and businesses, particularly in East and West Baltimore, which date back to the King riots in 1968, aren’t merely an “eyesore,” but breeding grounds for drug activity and violence.

I’ve written previously that if the city government wanted to turn the city’s fortunes around, or at least make a start, it would revive the $1 house program that the late Mayor William Donald Schaefer successfully implemented in the early-1970s. It’s said that younger citizens have been shut out of the housing market, and that may or may not be true (though not many 21-year-olds buy homes), but if the city put houses on the market and said to residents, of any age, “Here’s a house (or retail location) that if you restore it and live there, you’ll receive a large tax break,” thousands would take up the challenge. The Four Seasons Hotel and Whole Foods at Harbor East doesn’t need the government’s help, but young families, who are eager to own homes but can’t afford them, would welcome the opportunity. In addition, slumlords like Jared Kushner—just to name the most famous—ought to be prosecuted if they’ve committed crimes.

Photos have inundated social media this past week of Baltimore’s once-pristine Inner Harbor (meaning Harborplace, the Aquarium, Camden Yards, etc.) but they’re outdated. Harborplace (and the Gallery across the street) is a shell and will either be demolished or re-configured for an outdoor attraction that isn’t a mall.

Longtime Baltimore Sun columnist Dan Rodricks, who’s written columns at that paper (first at the long-ago folded Evening Sun) since 1979 is a tireless advocate for Baltimore—but not a rah-rah publicist like the monthly magazine Baltimore) who rarely sugarcoats the conditions of a worsening urban center. He wrote on July 27: “Baltimore has had a long spell of violent crime, and we are per capita one of the most violent cities in the country. It has been a miserable fact of life for a long time, the last four years particularly. And yes, we have rats and we have trash. But we do not need the president of the United States to rub it in all of our faces, especially a president of a political party that has done as little as possible over the last half-century to relieve us of these problems.”

Rodricks is half-right: There has been neglect, but the Freddie Gray murder occurred in 2015, when Barack Obama, a Democrat, was president. And that wasn’t Obama’s fault: he wasn’t mayor. Baltimore’s lost population steadily since the 1960s—Schaefer, a “clean” machine politician, helped revive the city’s flagging spirits with his City Fair and championing James Rouse’s Harborplace—and presidents of both parties have occupied the White House.

And Trump “rub[bing] it in all of our faces” sidesteps the real issue. Two of Baltimore’s last four mayors—Shelia Dixon and Catherine Pugh—resigned for corruption charges; Baltimore’s police department—feather-bedded to the hilt—is still a mess, with rotating commissioners, despite investigations after the Gray murder and resulting unrest (or “Uprising” as some called it); and the public school system is a disaster, not only because a lack of supplies but also for the union-protected teachers, some of whom are barely literate.

Elijah Cummings—like any politician, enjoying his pugilistic moment—knows all of this. As James Freeman reported in The Wall Street Journal this week, in 1999 (when Bill Clinton was president), Cummings testified at a House subcommittee hearing and said: “I live in a drug-infested neighborhood. I know people who have been trying to get treatment for years.” Three years later, Cummings, on the House floor, said: “More must be done to protect families living in communities of fear. Drug gangs cannot be allowed to rule our court system through intimidation. Children should not fear stray bullets as they sit in front of their homes.” And after Gray's death, Cummings, appealing for calm, said, “The only people making good now are morticians.”

Given the enormous sums of money donated to politicians in modern times—often from out-of-state—I was flabbergasted in 2016 when Pugh, a machine hack, didn’t receive competition from a well-funded reform candidate, a man or woman committed to blowing up a sclerotic, corruption-riddled city government, someone who’d explain on TV advertisements the remedies for starting Baltimore’s recovery. That the affluent liberals from across the country—like those who bankrolled Beto O’Rourke’s unsuccessful challenge to Sen. Ted Cruz in 2018—shunned Baltimore’s mayoral race indicates that the city’s considered a lost cause. Maybe local hero David Simon, who depicted Baltimore’s mayhem in the excellent TV series Homicide and The Wire, could help on that score.