The Block and Maryland’s Comic-Opera Politics

Inextricably joined at the hip. 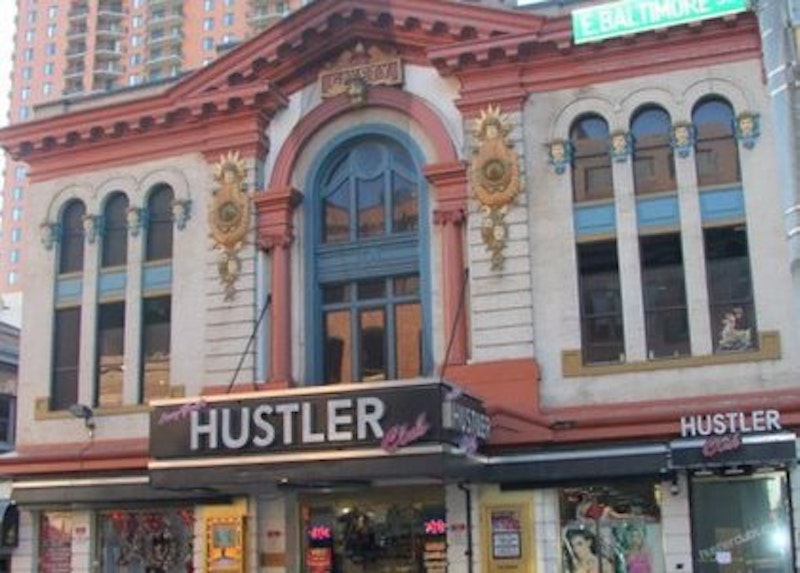 Exactly 20 years ago, on the sub-zero Friday of January 14, 1994, 500 Maryland State Policemen and National Guardsmen stormed the Block—the erogenous zone that stretches across the underbelly of downtown Baltimore like a cheap carnival runway—and raided 24 nightclubs and businesses in what was largely viewed as an urban land grab.

The raiding party arrested employees and patrons alike, carting them off in handcuffs to five waiting school buses. The troopers and Guardsmen arrived in Ryder rental trucks, armed with 60 arrest warrants charging 600 violations, and were led, Patton-like, by the governor of Maryland, William Donald Schaefer. Mr. Schaefer said: “We saw drugs, we saw prostitution, we saw liquor. It’s just not right.”

Before becoming governor, Schaefer had been mayor of Baltimore for 16 years, and before that a City Council member and its president. His City Hall office was one block north of the Block, and across the street from the Clarence M. Mitchell Jr. Courthouse, which is the heart of the city’s central red light district.

The raid was conducted in the shadow of the Baltimore Police Department headquarters building, located one block east of the Block. City police were not involved in the show of force. The State Police blitzkrieg closed down the Block for one night. A judge ruled the next day, however, that the liquor licenses had been illegally confiscated and ordered them returned to the licensees for a fee of one dollar each.

State Police spent $360,000 of taxpayers’ money on the investigation and raid. Yet within three months after the storming of the Block, prosecutors dropped dozens of the drug and felony distribution charges because the cases were tainted by improperly obtained evidence and sexual misconduct charges against undercover State Troopers.

As a result, the supervisor of the Maryland State Police drug bureau, a 23-year veteran of the force, was demoted two ranks to a low-visibility administrative post, from lieutenant colonel to captain. Two other officers were also transferred in the shake-up, while administrative charges were prepared against the three Troopers involved in the exchange of money-for-sex scandal.

The arrests were made for gambling, prostitution, narcotics and weapons violations. Colonel Larry W. Tolliver, the State Police superintendent at the time, said 26 handguns and a pound of cocaine were seized from one man who was described as a drug kingpin, who used the Block as a drug dealership.

Police also hauled off a number of video poker games, which they said were being used for illegal gambling.

At the time of the raid, most Baltimoreans sneered and viewed the show of force as overkill and, at best, a Keystone Kops comic opera. More manpower descended on the Block than is usually dispatched these days to foreign nations in military operations.

It has long been a durable fable that the Block is controlled by the mob. The mob wished it were true. The Block was a terrific generator of cash, not only from patrons and the curious out-of-town, one-night dipsticks, but also from the rental fees for rooms in the basements and the crash pads and gambling rooms upstairs. The girls contributed their share, too, in the form of percentages.

The mob may have been Sicilian at heart, but their minds were as American as money. The mob needed a laundry, more precisely one with a rinse cycle. So the Block and the mob seemed like a heavenly-made match, like cement shoes and the East River, like a kiss on the cheek and a Stiletto in the back, like chalk stripe suits and Borsalino hats.

With the Godfather trilogy and Goodfellas still knocking ‘em dead on cable TV, it seemed like just the kind of business arrangement Michael Corleone might have dreamed up to decontaminate the family’s ill-gotten millions from gambling and prostitution when he’d gone legit. But the Block, then, now, and always, will remain essentially a mom-and-pop, or husband-and-wife, or owner-and-lover, kind of business. The mob’s attempted takeovers were repulsed by the local police, who had their own reasons for making certain that the Block remained in local hands. Nonetheless, in the late 1960s and early 1970s, a federal strike force was established in Baltimore to investigate connections between the Block and the mob. It came up dry and eventually disbanded.

The Schaefer-ordered investigation and subsequent raid were said to signal the beginning of a new era of law enforcement cooperation that was agreed to by Governor Schaefer, then-Baltimore Mayor Kurt Schmoke and Colonel Tolliver. When Schmoke took office in 1987, he vowed to redevelop the Block. But a 40 percent vacancy rate in class-A commercial office space (at the time of the raid)—2.3 million square feet—had slowed the mayor’s bricks-and mortar campaign and allowed the Block to continue as a municipal Sodom to some and local lore to others.

There’s an original route that legend says gave the Block its name. In the old days, a pair of limousines was kept at the ready along Baltimore St., and for a few bucks a man could rent one for five minutes. The driver took his time so the customer could get his money’s worth from the woman he’d booked for the ride. And the route was always the same: South on Front to Lombard St., east on Lombard to the Fallsway, north on the Fallsway to Baltimore St. and back to the night club. It was called “taking a ride around the block.”

The Block and Maryland’s comic-opera politics are inextricably joined at the hip. A former mayor, Clarence Du Burns, and a former state senator, Joseph Bertorelli, played the saxophone in different nightclub bands on the Block. Bail bondsmen thereabouts had relatives in high offices. A major political boss owned several Block properties. A speaker of the House and future governor represented Block club owners and he once had the state’s obscenity laws overturned in the Block’s favor. Judges, ranking police officers and key political officeholders were among the Blocks patrons and protectors. Block club owners were major campaign contributors.

The Block came under fire from city legislators in 1992. They had threatened to shut down the Block entirely, but club owners beat back the challenge. In 1997, the city created an adult entertainment district around the Block. The move was designed to contain the clubs as well as to recognize the Block as a tourist attraction so the likes of pot-bellied Rotarians from Iowa could live out small-town fantasies at big-city prices.

Block business owners agreed to clean up their storefronts, and show bar operators consented to upgrade the quality of the entertainment they offered. The city’s Office of Tourism touted the Block in its promotional brochures. The attitude of the succeeding mayor, Martin O’Malley, now governor, was to discourage any further expansion of business on the Block.

Yet in November 2003, Larry Flynt, the celebrated pornographer, opened Larry Flynt’s Hustler Club on the second and third floors of the restored Gayety Theater as an elaborate and posh gentlemen’s skin club. Among its architectural features is a glass dance floor that allows patrons on lower levels a bottoms-up view of female dancers.

Owners of established clubs initially opposed the arrival of the upscale intruder, but later accepted Flynt’s club as a magnet for cultivating a new generation and class of clients. All the while, city leaders adopted a posture of winking at the Block’s minor legal and moral transgressions.

In February 2000, for example, the Baltimore Liquor Board issued $105,450 in fines for adult entertainment and liquor law violations, according to The Baltimore Sun.

On the night of the raid, Governor Schaefer said: “I’m disappointed in the Block. Years and years ago, when Charles Center was first developed, the Block was left in, simply because it was a safe place. There wasn’t crime, there wasn’t drugs, there wasn’t problems with alcohol. But what I saw tonight, it’s gone down. It’s really gone down.”

And so, some say, will the buildings eventually come crashing down. But through wars, legal challenges, creeping development and the moral taunting of religionists and social activists, the Block has remained a durable prop of downtown Baltimore’s midsection and a kitschy artifact of cultural life here on the lip of the Patapsco drainage basin.

—Some material in this column was adapted from DeFilippo’s 2005 novel, Hooked.