Roland Park Water Tower and other sites around the state deserve preservation. 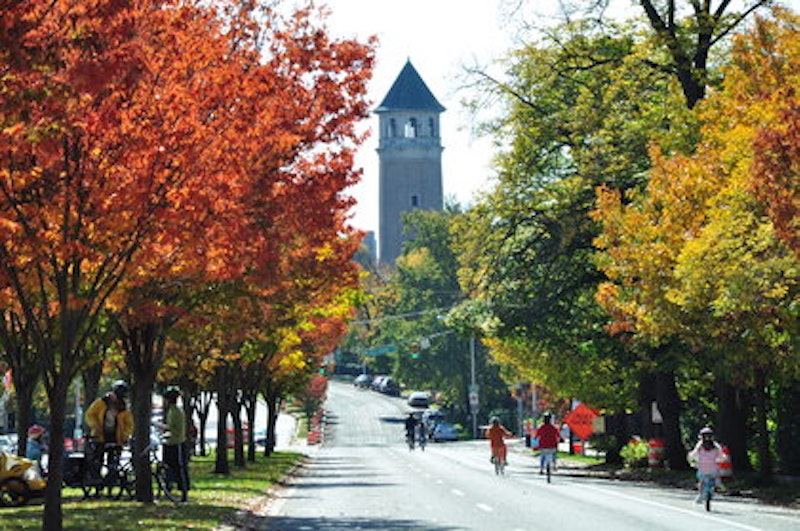 It brings great sadness to my historic preservation heart to see a beautiful building in danger of loss. Whether the threat is demolition or simply neglect, majestic buildings deserve a better fate than simply being taken back by the earth. And as much of a pain in the ass as it is to work on a local preservation effort, it’s worth it. Historic places are irreplaceable, and we’re sure not building much these days that will be worth fighting for in the future.

The other day I was in Baltimore’s Roland Park neighborhood, which is actually North America’s first “planned community” and includes the oldest shopping center in the world. Besides the massive gorgeous houses, what caught my eye was the beautiful tower structure that is central to the town but clearly abandoned. The dramatic, iconic Italianate structure is dilapidating and surrounded by an ugly chain link fence. How could such an important local landmark be left to disintegrate into an eyesore in such a wealthy neighborhood? Research showed that the tower, which originally served as a water tower when built in 1905, was listed on the state’s endangered historic sites list in 2011.

The state historic preservation non-profit Preservation Maryland, founded in 1931 as the Society for the Preservation of Maryland Antiquities, is dedicated to preserving Maryland's historic buildings, neighborhoods, landscapes, and archaeological sites through outreach, funding, and advocacy. They began the Endangered Maryland list in 2007 to bring attention to the most endangered, threatened or abandoned historic structures all around Maryland. There’s an interactive map on their website where you can explore previous years' listings.

“Endangered Maryland is effective at bringing attention and resources to our state’s most threatened historic resources,” Preservation Maryland Executive Director Tyler Gearhart told me in an email. “As we prepare to solicit nominations for our 2014 list—our eighth year—we are redoubling our efforts to increase the visibility of the program and are proud that only two of the 75 Maryland sites designated “endangered” have been lost. The key to a successful outcome is that nominations be submitted by local organizations that then use the designation to build community and financial support for the properties to be saved.”

It turns out there are only two Beaux Arts water towers left in Maryland, and the Roland Park Water Tower was under threat of demolition by Baltimore City until local preservationists intervened in 2009. Although a 2012 Baltimore Sun article reported on the environmental cleanup (300 bags of animal waste were removed and the tower was sealed off to birds) and seemed optimistic about the future of the building, it remains surrounded by the hideous chain link fence. As is the sort of disgusting tradition of developers to name things after nearby lost or endangered landmarks, new local shopping centers are named after the abandoned tower.

But these things take time; as with any preservation effort, it’s the local community that plays the key role in making the save. The Roland Park Community Foundation has advocated the tower’s preservation as part of its open space plan. The group dedicated to the building “Friends of Roland Water Tower” (their website declares “Let’s make 2013 the year the tower gets saved.”) secured a quarter million dollar state bond and is working to raise the more than $1.2 million needed to restore the tower and its park-like setting to the neighborhood so that one day it can serve as a centerpiece to the continent’s first planned suburban community again and not a painful reminder of a society that doesn’t place enough emphasis on saving our heritage.