It's all about the small pleasures now. 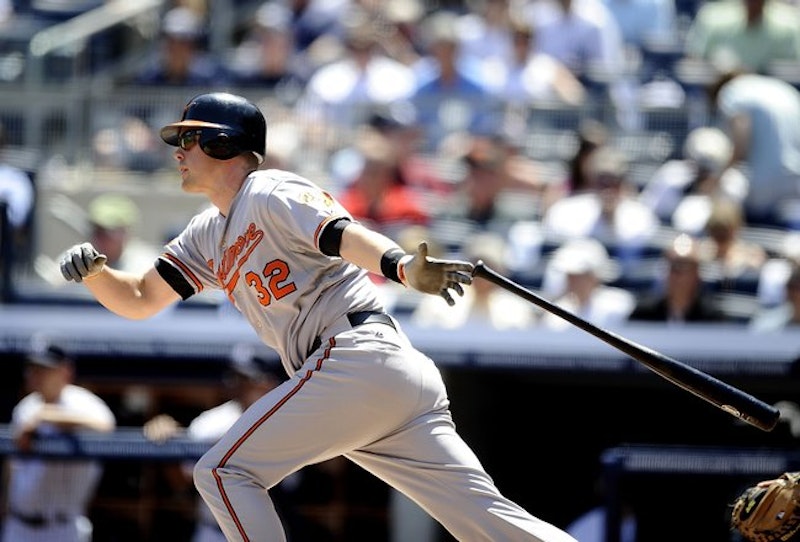 I took my son to opening day at Camden Yards last Friday for the start of the Baltimore Orioles’ 2012 season. He’s five years old and has been to three straight opening days. I’m hoping that in the next year or two his mother and little sister can join us for an annual day of family fun. For now opening day is mostly about father/son bonding with baseball serving as the backdrop.
Opening day in Baltimore is largely symbolic these days. The day brings the promise of summertime sunshine, crab feasts, and trips to the beach. Wins by the home team are no longer a part of that equation. I’m really past the point of being frustrated by the Orioles on-field performance and uninspiring offseason acquisitions. I was watching the game on Tuesday night as the Orioles blew a late inning lead against the Yankees thanks in part to a Mark Reynolds’ error. My Twitter feed exploded with comments about Reynolds’ play in the field and penchant for botching routine plays. I couldn’t be bothered to work up so much as a single four-letter word. Of course Mark Reynolds made a costly error. He’s Mark Reynolds. He’s not a Major League third baseman and the fact that he is playing third for the Orioles tells you all you need to know about this team’s commitment to winning.

I’ve watched parts of every game this season. I’ll log a half inning here and a half inning there between chapters of a book or an episode of some idiotic television show. I didn’t need to watch the 10th inning of Wednesday night’s game to know that Kevin Gregg would serve up a Yankee dinger. The only thing in question was the identity of the batter. There was a time when I was glued to the television for every pitch. The Orioles were at one time the soundtrack of summer. Now they’re just filler between re-runs of Swamp People and Tosh.0. The Orioles are white noise.

These days I’m mostly interested in watching Matt Wieters bat and Wei Yin Chen pitch. Wieters has been on fire with the bat in the early going. He’s mashed the ball from the left side of the plate and predictably played stellar defense.  Wieters is the closest thing the Orioles have to must-see TV. Chen is a novelty at this point. At just 26 he’s considerably younger than the O’s other recent Japanese imports Koji Euhara and Tsuyoshi Wada. I’ll tune into Chen’s starts to see how he adjusts to the big leagues and works his way through AL East lineups. I’ll tune in until his ERA climbs past 5.00 and the team sinks further down the standings.

I’m not as big of an Orioles fan as I used to be. I’d like to live and die with every pitch but the organization doesn’t seem to want that from me. I’ll be there for opening day next year but the final score will be inconsequential. I’ve come to the realization that my kids will never be fans of the O’s the way I was as a kid. That saddens me. They won’t really miss out on anything. In fact they’ll probably be better off. We’ll find other interests to serve as a backdrop for family bonding. The sad part is that the Orioles will miss out on another generation of alienated youngsters tired of waiting for the home team to love them back. There’s your defining moment.