No One Is Safe When the General Assembly is in Session

The Maryland General Assembly is dangerously close to doing nothing. 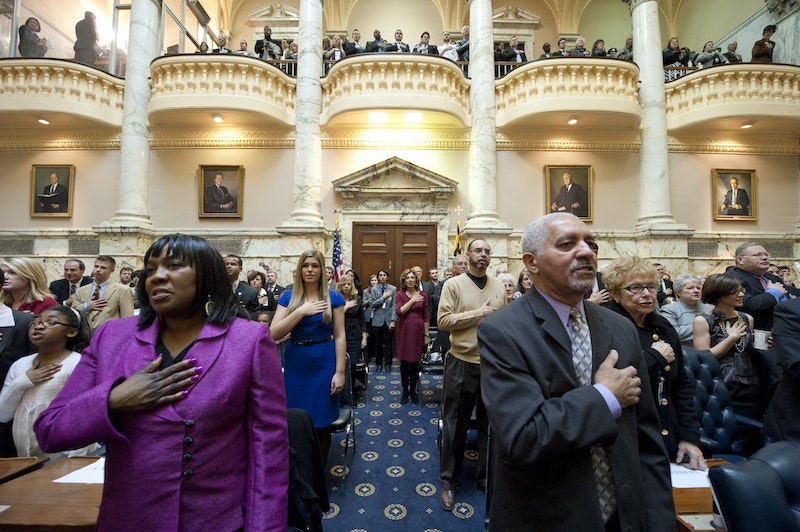 Believe it or not, the Maryland General Assembly has only one legal requirement during its 90-day meetings and that is to enact a balanced budget. The legislature met that obligation but only in the breach. It allowed the wrong budget to become law by failing to enact companion legislation. Even that’s now in question. And now the gamesmanship really begins over whether there’ll be a special session to correct the deficiency and what the limits will be.

Two things appear to have happened: Sen. President Thomas V. Mike Miller (D-Calvert) got cute; and Gov. Martin O’Malley (D) took his eye off the ball. Miller, with his manic obsession over gambling outlets, demanded a casino in Prince George’s County, which has long resisted one. Whenever gambling interests intrude in the legislative process the system of making laws breaks down under the weight of money. (Many of the top lobbyists on the casino issue are former Miller aides.) And O’Malley submitted a top-heavy agenda of programs that the Assembly rejected and caused the Administration to lose its focus and control, some say because O’Malley is preoccupied with a resume upgrade and career advancement.

There is a possible third entry, and that is the fatigue factor—by O’Malley as well as the legislature. O’Malley has been in office for six years. During that time he has made serious demands of the heavily Democratic Assembly just to stay even during the national economic slump. He has won much of what he wanted. But this time he may have gone too far even for a legislature dominated by his own party. O’Malley asked for too much in taxes, which he didn’t get. And he asked for too much for the environment which he didn’t get, especially his cherished wind farm off Ocean City that he wanted electricity rate-payers to underwrite because no business will take the risk or provide the financing for an uncertain enterprise.

And what may have been overlooked during the recent session is the primal scream of survival: legislators have to run for reelection in 2014 and O’Malley doesn’t. They’re worried about saving their own skins and not his. So what programs O’Malley lost this year may be dead for the remainder of his term. The next regular session of the General Assembly in 2013 leads head-long into the election year and very few lawmakers are going to risk their careers on suicide missions to enhance O’Malley’s record and legacy.

Miller, along with House Speaker Michael Busch (D-Anne Arundel), has urged O’Malley to summon a special session to rectify the mistakes of the final night when the mandatory budget got squeezed in a double-play. But it appears that O’Malley is in no rush to oblige but is content to let the legislators return home to catch some grief from their constituents and from local officials who must deal with the failure to adopt the full $36 billion budget. It will cost local governments dearly if the budget mess isn’t fixed.

O’Malley says he will not call a special session, at a cost of $21,000 a day, until legislators reach a deal, if at all. That is mainly bluster, if not shifting the blame. O’Malley wants his budget and could give a fig less about a casino. Miller says that O’Malley is the key to any accommodation, which is true because a legislature, by its very nature, is not a decision-making body but an entity that ratifies others’ decisions. Miller adds that a sixth casino in Prince George’s should be considered at a special session even though only two of the authorized five are up and running and underperforming at that. Back to square one in Miller’s lonely battle with himself.

What got lost on the final night of the session was, pure and simple, $512 million. That is the amount of the cuts that will go into effect on July 1 if the budget is not modified to reflect the intentions of the O’Malley Administration as well as the Democratic legislature. They include but are not limited to: funds for K-12 education as well as higher education; $129 million in aid for Baltimore City and the poorer counties; funds for roads; and the termination of 500 state employees.

Those cuts comprises the “doomsday budget” that was ordered by Miller to illustrate the damage that would result if taxes weren’t raised. In the end, there was general agreement except that the increase in income taxes for high income earners and the enabling legislation for the budget were not adopted to offset the cuts and provide the proper balance. The casino bill got in the way of good governance. Now it is said that even the “doomsday budget” is out of balance by $70 million. The “doomsday budget” is an annual exercise in austerity that no one ever expects to be adopted except that this year Republicans in Annapolis embrace the idea and are suggesting that the cuts remain in effect, kind of like the local version of Rep. Paul Ryan’s (R-WI) misguided austerity budget in Washington.

For his part, O’Malley has accepted a share of responsibility for the fiscal failure at the same time he is shifting blame back to the legislature. He has spent several days in the two media markets of Baltimore and Washington blasting the airwaves with his view and spin on the spectacular collapse of the 2012 session.

But here’s an over-the-shoulder view of the wreckage. O’Malley appeared to withdraw from the give-and-take of legislating once the same-sex marriage law was adopted and signed with great pomp and photo-op ceremony. It appeared that he considered its passage the singular achievement of the session and now it’s headed for referendum where its future is dicey. He’d asked for a sales tax on gasoline and when the proposal appeared doomed he shifted to an increase in the sales tax to seven cents from six, with the proceeds dedicated to transportation. His coastal windmill farm was mainly about bragging rights. Other states have authorized their construction but none is underway because of a lack of financing. O’Malley’s septic system bill was seriously weakened and local governments fought what they considered state encroachment over local authority. He was denied a tax on Internet purchases. The proposed shift of teachers’ pensions to the counties got caught in the final-night jam. But he won a doubling of the “flush tax” whose proceeds are used to upgrade sewage treatment plants to cleanse the Chesapeake Bay. And the legislature rejected O’Malley’s P-3 plan for public-private projects that would allow private interests to pocket profits at public expense.

There are those who argue that O’Malley is preoccupied with his chairmanship of the Democratic Governors’ Association and his frequent appearances on network talk shows that he views as a pathway to the presidency in 2016. Whatever the case, O’Malley appears to be getting sloppy as his years in office dwindle down. Look back over the decades and the same symptoms appear in virtually every administration. There are only so many times a governor can browbeat legislators. And there are only so many patronage jobs and building projects to go around. There is also an iron-clad rule of governance: Never ask legislators to cast a vote that will hurt them back home.

Every session of the legislature has a different rhythm and cadence. No two are alike. And this session certainly had a life (and death) of its own. Add all of the elements together and the 2012 session was far from a flattering performance in Annapolis. Nobody’s very happy—not the governor, not legislators and most of all not the voters and certain constituencies. There are even those who contend that allowing the budget cuts to stand and fixing them next year is preferable to risking another farcical performance during a special session. Only, it appears, are the anti-gambling crusaders delighted with the outcome of the session. So, too, are high income taxpayers. But don’t start applauding just yet. As a New York probate judge once observed: “No man’s life, liberty or property is safe when the General Assembly is in session.”