A Blue State With Red Margins

Why Republicans barely bother to try and win primaries in Maryland. 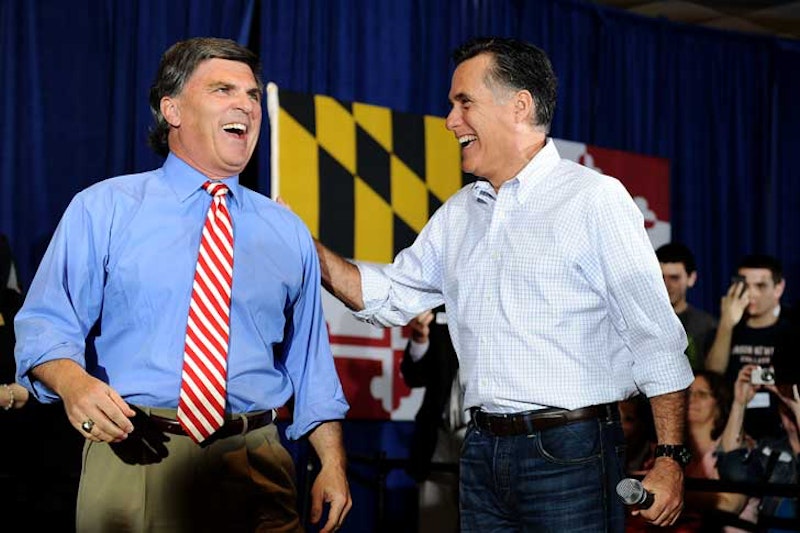 Mitt Romney made a brief pit stop. Ron Paul breezes through College Park. Rick Santorum books a pass-through. New Gingrich dropped by about six months ago and arranges a single return engagement. And not a dime is being spent on radio and television advertising. Is it any wonder that Maryland belongs to President Barack Obama, who considers it practically his personal photo-op backdrop on frequent visits? So it goes for Maryland, no matter how hard the state struggles for recognition in presidential elections it understandably gets only token visits from Republicans. And the disinterest will show on Election Day when the ministers of influence are kvetching about low voter turnouts.

For the April 3 presidential primary election, Maryland this year is aligned with the District of Columbia and Wisconsin, unlike 2008 when the so-called Potomac Trifecta bunched Maryland, DeeCee and Virginia into a made-for-media melodrama between Obama and Hillary Clinton. The cobalt-blue warrens of Maryland and DeeCee belong, heart and soul, to Obama, so most of the night’s attention will be focused on Wisconsin which is in turmoil over recall elections and the anti-labor antics of Republican Gov. Scott Walker.

It’s easy to understand why Maryland is frequently ignored in presidential politics. Three weeks after the Maryland primary, on April 24, four states will hold primaries. Among them are New York with 95 delegates and Pennsylvania with 72. And the final round of primaries on June 5 includes California with 172 delegates and Texas with 155. Campaign time and treasure are better invested where the dividends are greater.

What a disappointment. Maryland provides the perfect foil for the GOP conservative candidates to play against the febrile issues of same-sex marriage and abortion where a good fight will do them no good locally but amplify their positions nationally. The symmetrical positions, to one fanatic degree or another, of Romney, Gingrich and Santorum as conservative pro-life candidates are well-known, although Romney has lurched to the right from his pro-choice stance as governor of Massachusetts. Maryland has been solidly in the pro-choice category of states since the early 1970s and just a few weeks ago became the eighth state, in addition to DeeCee, to authorize gay marriage.

For Maryland, the math is about the same as that of 2008. Democrats still outnumber Republicans nearly 2-1. The State Board of Elections records 1958 million Democrats and 930,155 Republicans. Maryland is not a crossover state. Party politics are exactly that. You vote the line on the ballot to which you’re registered. And those half million registered independents (declines) who think they’re strutting their stuff and their smarts are not allowed to participate in primary elections because they chose to opt out by showing their disdain for both major parties. Early voting in Maryland continues through March 29.

On the Democratic side of the ballot, there is very little activity to inspire voters. There is only one contested Congressional race, and that is in the newly configured Sixth District where Democrats are trying to capture a seventh House seat. State Senate Majority Leader Robert J. Garagiola is locked in a bitter and expensive contest with financier John Delaney for the Democratic nomination to face Republican incumbent Rep. Roscoe G. Bartlett in November. And Sen. Benjamin L. Cardin (D) faces only modest opposition as he runs for a second six-year term as Maryland’s junior senator. There are no local races of any import and the General Assembly will be in the final days of the 2012 session and largely unavailable to help deliver the vote. After all, they’re not running this year so why bother.

Republican turnouts in primary elections are traditionally very light because in Maryland the GOP rarely has contested primaries. The only GOP action is at the top of the ticket where the presidential candidates are scrapping for the headline as well as the state’s 37 delegates, 24 of which will be awarded on a proportional basis to the winner in each of the state’s eight congressional districts. Of the remainder, 10 delegates will be awarded to the statewide winner and three will be allocated by state GOP leaders.

In the 35 states where primaries have occurred, Romney has displayed massive spending and superior organization, if little else, and has collected more than half the 1144 delegates that he needs to win the GOP nomination. There is no reason to expect less of a performance by Romney in Maryland even though Santorum lives next door in Pennsylvania. Former Gov. Robert L. Ehrlich Jr. (R) is Romney’s Maryland campaign chairman and brought his candidate to his hometown of Arbutus for an hour’s visit.

Religion has played a larger than usual role in GOP presidential politics. Romney’s Mormonism and Santorum’s evangelical brand of Catholicism have, on many occasions, overshadowed their public policies, in Romney’s case because of suspicion of Mormonism as a cult and in Santorum’s by his peculiar theocratic view of government.

Maryland is home to nearly one million Roman Catholics spread over three dioceses—the Archdiocese of Maryland, the Archdiocese of Washington and the diocese of Wilmington. The state is also host to one of the largest Mormon temples outside of Utah, overlooking the beltway in Silver Spring. Romney has lost most of the Deep South states that boast large populations of evangelical Protestants, and Santorum, ironically, has lost most states with large Catholic constituencies. Maryland does not have a notably large evangelical presence nor does it have a hyper-active Tea Party cell.

Maryland is a blue state with red margins. Much of the state’s Democratic party is clustered in five jurisdictions along the I-95 corridor—Montgomery and Prince George’s Counties that border the District of Columbia, and Howard and Baltimore Counties along with Baltimore City to the north end of I-95. The Eastern Shore is considered among the most conservative regions in America, and if a solid pocket of evangelicals exists in Maryland it is contained in those nine counties, especially in the lower Shore counties where tent revivals are commonplace. Carroll County is another outpost of conservative activity. Southern Maryland, especially Charles County, is becoming more Democratic as it is overtaken by urbanization and development. And if Republicans have a stronghold in Maryland it is in the Western part of the state, especially in and around Frederick.

What small part Maryland might play in Republican politics is to deliver a convincing message to Santorum and/or Gingrich to call it quits because much of the Republican establishment is now lining up behind Romney as the inevitable nominee. Even the Tea Party leadership has dropped its opposition to Romney. This was Romney’s strategy all along—to slog it out delegate by delegate by battering his opponents with attack ads. Nonetheless, Romney has spent more than $100 million so far only to discover that people really don’t like him anymore now than they did when he ran in 2008.