Among Wolves are back with a new album, and it was worth the wait. 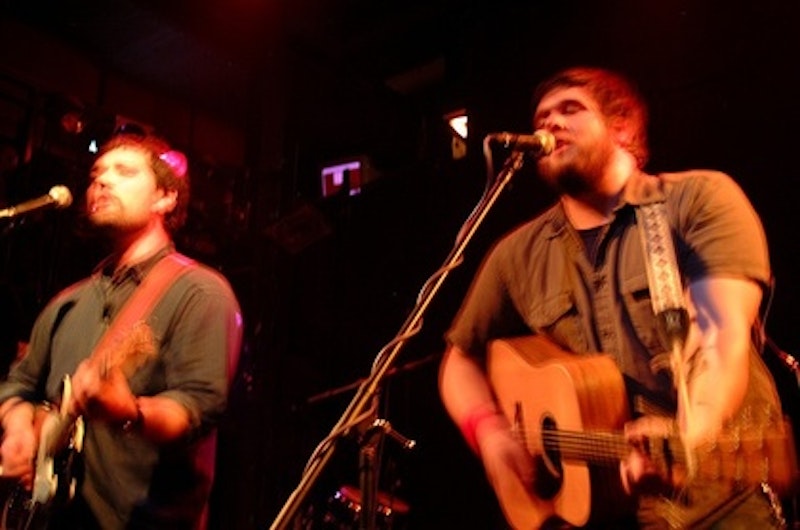 Four years after the release of their self-titled debut, Baltimore alt-rockers Among Wolves are back with a much-anticipated follow-up. This is a Wave Goodbye, out now on iTunes, Amazon and half-a-dozen other online platforms, finds the band again reworking some of its older lo-fi recordings—sparse early versions of most of these songs can be found on In the Beginning, the band's 2009 retrospective collection of rare and previously unreleased noise-junk experiments and folksy ramblings, drawn (mostly) from hundreds of four-track recordings made by frontman Billy Tiedeken around '04 and '05.

Listening to the two albums together suggests 1) that Tiedeken had a remarkably productive year/year-and-a-half when he was recording amazing stuff that almost no one was hearing; and 2) that Among Wolves are the band they are today (read: brash, twangy Wilco-esque bar rock) because of Jason Butcher, who on Wave Goodbye has gone from multi-instrumentalist to something like co-frontman; he sings three of the albums nine songs, and worked with Tiedeken on lyrics and arrangements.

If you'd gone to an Among Wolves show a year or two ago, you'd probably find Butcher, Tiedeken and Cahill trading off instruments between songs, Butcher back and forth between drums and guitar. But at their Metro Gallery show in early February, the band finally had what looked like a regular lineup: Don Godman had been brought on to play drums a few months before, and now Bryson Dudley, part of Butcher's other band, Beard, was on bass. And there was Butcher, right up front with Tiedeken the whole set.

Not that Wave Goodbye marks some revolutionary turn. Anyone who's been to an Among Wolves show in the past couple of years has heard all but maybe one or two of these songs, none of which really differ from their live versions. Yes, Amy Cavanaugh adds some pleasant cello to "Love, Pt. 8" and "Broken Afternoon," and there's some pretty raucous horns on "Brightest Things," but for the most part Wave Goodbye is just a really well-recorded live album, right down to the song count-offs and the banter and whoever yells WaaAAHHH! at the start of "3 AM." Minus some of the Beach Boys-inspired pop stuff it also doesn't stray too far from their debut.

So when I asked why it took four years for an official release, Butcher put it simply: "Four kids, three houses, three marriages, one divorce. I guess time just got away from us. Unfortunately we're not the most motivated band." Maybe not, but they do sound more assured than ever; there's none of the under-rehearsed strain of their debut. Granted, part of that is because Among Wolves has really come into its own as a live band over the past couple of years, but I'm sure a lot more credit is due to producer Steve Wright, an industry vet who's worked with everyone from Mos Def to Slipknot to Jimmy's Chicken Shack. There's a professional gloss to Wave Goodbye that you'd never expect for a band that got its start recording some lazy guitar strums on a few thrift store mics.