Is Maryland Ready for a Black Governor?

No lieutenant governor has ever ascended to the governorship by election. 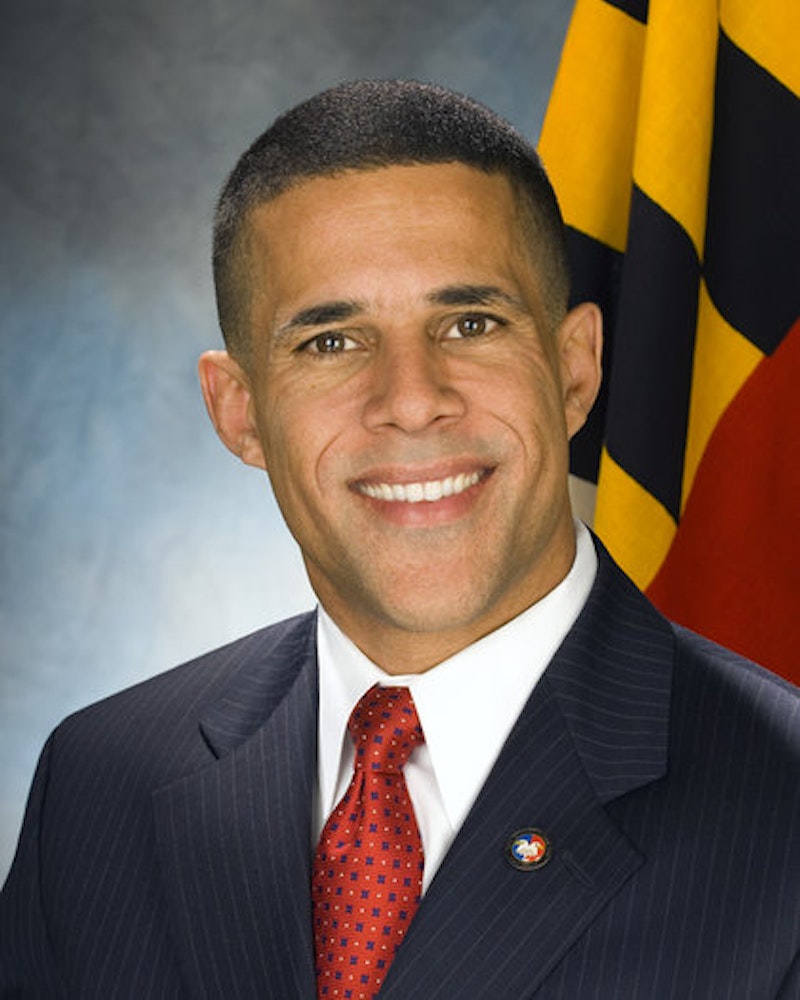 Maryland has three candidates for governor in 2014: one who’s halfway there, one who wants to be there and one who thinks he belongs there. They’re all Democrats and their names are: Lt. Gov. Anthony Brown, Attorney General Douglas Gansler and Comptroller Peter Franchot. As for which is which, let the readers do the mix-and-match exercise to suit their feelings although the pairings of names with motives should be obvious to most political hobbyists.

There are a couple of other names floating around as well, say, Ken Ulman, executive of Howard County on the Democratic side, and David Craig, executive of Harford County, in the Republican lineup. But it’s a little early to begin filling the derby with names since the office will not become available until 2014 when Gov. Martin O’Malley (D) rounds out his final term and heads off for who knows where or what.

The next election for governor is notable for several reasons, among them the fact that the seat will be open after O’Malley’s two terms, an occasion that’s happened every eight years except twice in 62 years. Discounting Spiro T. Agnew, who went on to bigger and better rewards, Robert L. Ehrlich Jr., another Republican, was the first sitting Maryland governor to be turned out of office after a single term since William Preston Lane, a Democrat, was defeated in 1949 by Theodore R. McKeldin, another Republican.

What’s more, the 2014 election will be the warm-up for 2016 when the Baltimore City mayoral election will be aligned with the statewide election cycle for the first time in many generations, when the two were separated because of violence and disturbances that marked the elections in Baltimore.

Dating back to the mid-19th century, election days in Baltimore were commandeered by roving gangs of thugs, i.e., the Plug Uglies and the Blood Tubs, to name two, who intimidated voters at the polls and often caused riots that and earned the city the sobriquet “Mob Town.” Then again, after the 2016 presidential election, the city’s election will be shifted to align with the gubernatorial election and stay put. The General Assembly adopted the move during the 2012 session and the realignment is supposed to boost turnout as well as save the city $3.5 million every election cycle. In the deal, Baltimore’s elected officials get a bonus year in office, a single five-year term.

The eventual conjoining of the two elections will give Baltimore added significance on the campaign schedule as well as an additional emphasis on the importance of the black vote, which, predictably, can be a high or low turnout in the primary election depending on whether a challenge exists at the top of the city ticket. The impetus for the change was the dismally low turnout in the last mayoral election, in the low 20 percentile, and even lower in the primary.

And in 2014, it appears at the early stages that the Baltimore area will not be represented in the mix for governor as the three early bird major Democratic candidates all hang their hats in the voter-rich Maryland suburbs around Washington. This, in itself, creates a demographic self-cancellation which shifts a large role-playing function to Baltimore City and County at the north end of the I-95 Democratic corridor. But don’t be surprised if one or more candidates for governor turns his attention to the Baltimore area for a running-mate for lieutenant governor, in two cases blacks and in another a white.

The lineup is prime time. Brown is Maryland’s lieutenant governor, which is both a blessing and a curse. Dating back to the office’s reconstitution in 1970 (the office had not existed from the time of the Civil War), the job and the title have been more of a millstone than a stepping stone. No lieutenant governor has ever ascended to the governorship by election—Blair Lee lll, Sam Bogley Jr., Joseph J. Curran Jr., Melvin Steinberg, Kathleen Kennedy Townsend or Michael Steele.

Brown is the seventh person to occupy the space on the modern state government flow-chart. Brown has been a loyal understudy to O’Malley, who has given his second-in-command several high visibility assignments, most notably the military base realignment (BRAC) and now the implementation of the Affordable Health Care Act (Obamacare), whole or in part, with or without the Supreme Court’s imprimatur.

Brown is usually at O’Malley’s side during photo ops and high profile appearances such as bill signings (although the lieutenant governor has no official role) and news conferences. Brown is black and from Prince George’s County, where 73 percent of the population is black and the largest Latino presence in the state calls home. To wit: He is an attorney and a lieutenant colonel in the Army who served in Iraq.

Gansler makes no effort to conceal his agenda and his ambition. He is the former state’s attorney for Montgomery County who often found himself in hot water because of his headline-grabbing for which he was once reprimanded. He also got into a cross-border feud with Virginia officials over who would prosecute in the notorious sniper case. Gansler is an aggressive fundraiser. He has made the environment his trademark issue and has openly courted gays and blacks—three of the backbone constituencies of the Democratic Party. Long before gay marriage became a major issue in Maryland, Gansler issued an opinion stating that Maryland must recognize same-sex marriages performed in other states as valid just as any other contract must be honored. Gansler was recently elected head of the National Association of Attorneys General.

Franchot became a minor celebrity, at least temporarily, by defeating the aging and idiosyncratic William Donald Schaefer in his bid for a third term as state comptroller after having served as governor and mayor of Baltimore. Schaefer, by then, had become an object of pity, if not derision. He scolded a McDonald’s employee for not speaking English and not serving his happy meal fast enough. He mocked Janet Owens as a dowdy old woman in ill-fitting dresses. But his real downfall came when he asked a young secretary at a Board of Publics Works meeting to turn around and make a second pass so he could get another look at her derrière.

Franchot’s perch is the Board of Public Works where he sits as one of three members along with O’Malley and Treasurer Nancy Kopp, another Montgomery County Democrat. There he showboats, often disagreeing with the governor on land purchases, and always diverging on gambling issues. As a member of the House of Delegates, where he was often belittled for playing to the press galleries, Franchot supported slots but now as a born-again comptroller he opposes the devices as well as any expansion of gambling.

If the three principal candidates, all statewide officials, enter the primary race for governor in 2014, Gansler and Franchot enjoy one kind of an advantage while Brown comes pre-packaged with another. Gansler and Franchot are independently elected officials with offices and functions assigned by the Constitution. They can move about freely and create their own momentum. By contrast, Brown, as lieutenant governor, is a subordinate, subject to O’Malley’s whim with only those duties assigned to him by the governor. Branching out on his own can go only as far as the leash allows.

But Brown is black in a state with the largest black population outside the Deep South, at 33 percent—one third of the vote in a three-way race. And with any luck, Brown could wind up with a friend and ally of the same persuasion in the White House. Finally, think how appealing a triangulation of the vote must appear to a fourth Democratic candidate who’s out there lurking somewhere.

Afterword: Now, will Del. Pat McDonough (R-Harford) please shut up about the dangers of downtown Baltimore. Over the “Sailabration” weekend, between a half million and a million people—who really knows how many?—jammed the perimeter of the Harbor to gawk at the 40 tall ships and naval vessels and to strain their necks as the Navy’s Blue Angels screamed overhead. The festivities went off without a hitch. No gangs, no beatings, no muggings, no hassles (except parking). Even McDonough would have been safe in the crowd if he had had the courage or the interest to venture downtown from his suburban bunker.

So it might be instructive for McDonough to note that when people flood the downtown area crime and criminals disappear and visitors are free to move about unbothered and unafraid. Instead of using his mouth to discourage people from traveling to downtown Baltimore he ought to encourage patronage of the city and the sights, sounds and experiences that it offers. In that way there would be no need for McDonough to behave like a yammering know-nothing by clamoring for a State Police presence. The more the merrier and safer downtown Baltimore will be with a little less self-serving scare tactics bordering on racism.