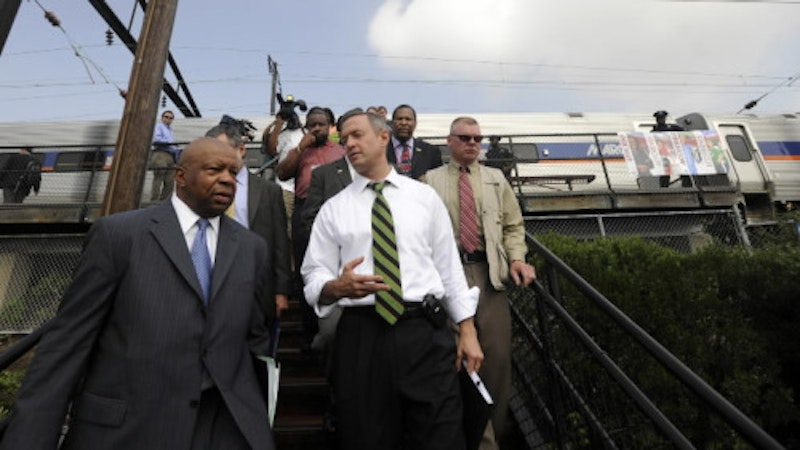 When Maryland Gov. Martin O’Malley (D) was campaigning for reelection in 2010, his main attack line was that his predecessor and opponent, Robert L. Ehrlich Jr. (R), had raised taxes, tolls and fees by $3 billion during his four-year term. O’Malley was right. Ehrlich’s comeback, more often than not, was that if O’Malley was reelected taxes in Maryland would soar. Ehrlich was right, too. If O’Malley’s current tax package is adopted, his overall increases will nearly total Ehrlich’s $3 billion—and with two years left in his final term.

Ehrlich was the victim of his predecessor, Gov. Parris Glendening (D), who made two foolhardy moves: He cut the income tax rate when there was no clamor for it but more as an election year gift to himself; and he left the $3 billion Thornton aid to education program unfunded and dumped the cost on Ehrlich. O’Malley, by contrast, was sucked under by the economy’s near collapse, as was every other governor of the 45 states that require balanced budgets. Both were plagued by the recurring inconvenience of what is called the structural deficit—when projected revenue falls below expected costs. What’s more, fully 80 percent of the programs in Maryland’s budget are mandated and must be funded. Both O’Malley and Ehrlich had nowhere to turn but to the taxpayers.

To his credit, O’Malley has made several rounds of painful cuts adding up to a couple of billion dollars, including revising the state pension system. And he has kept spending increases annually at about three percent. This year’s proposed budget is $36.5 billion. Ehrlich, however, submitted budgets with increases as high as 10 percent and at one time went beyond the limit suggested by the Spending Affordability Committee which is advisory and not binding. O’Malley’s first round of tax hikes in 2007 amounted to $1.2 billion mainly through an increase in the sales tax from five to six cents. Last year he broadened the sales tax to include alcohol.

This year he’s going for a major grab, i.e., gas tax increase ($600 million), income and sales tax adjustments ($250 million), flush tax ($70 million) and new taxes on Internet sales and downloads, to name a few. Tolls and fees have already been increased and O’Malley wants to impose stiff new fees on pleasure boaters in Maryland (there are an estimated 250,000 boats registered in the state.) He wants to increase the flush tax by charging for usage instead of a flat fee and he is asking that electricity users pick up the tab for construction of a wind farm along Maryland’s Coast (commercial users would pay 2.5 percent a month while residential users would pay a flat fee of $2.) But no proposed tax increase has produced more outrage than the idea of cutting the state’s mortgage interest tax deduction for those earning $100,000 or more. The mortgage interest deduction is arguably the largest break most taxpayers receive and has always been regarded as a middle class entitlement.

The area of the proposed budget that is most vulnerable is transportation, whose Consolidated Transportation Program has a total request of  $3.738 billion—a combination of various taxes, tolls, fees and federal funds. After a commission recommended increasing the gas tax by 15 cents, or $870 million in new revenue, O’Malley changed his mind and wants to impose a graduated sales tax that over three years would add up to 18 cents or 24 cents to a gallon of gas, depending on who’s doing the math, at a time when gas prices are soaring. But motorists adjust to high gas prices by curtailing driving in a roundelay of diminishing returns that could backfire. In politics, timing is everything. He has also proposed doubling many of the associated automobile fees, i.e., titling tax from $50 to $100, vanity tags from $25 to $50, the vehicle dealer processing charge, among others.

O’Malley has ambitious plans for the new money, including the pipedream of constructing two new major mass transit lines, the Red Line in Baltimore and the Purple Line in Montgomery County. Each would cost about $2 billion. These would be in addition to the usual road construction and maintenance as well as increasing the amount of highway funds that are returned to the subdivisions which were cut earlier. As with much of the political jabber these days, virtually all capital construction projects are being promoted as job creators. Labor is 50 percent of the cost of any capital construction project. And state construction projects pay the prevailing wage. In fact, much of the money would go to the asphalt gang and the buildings trades unions, the beneficiaries of most capital spending in Maryland. (The original Baltimore Metro, for example, from Owings Mills to Charles Center, created two million man hours of work for the building trades unions.)

But there are a couple of major problems on the transportation side of the budget. First, there has been a significant drop-off in federal transportation aid to the states; and second, the state has nearly reached its debt limit on the amount of money it can borrow. But the biggest problem of all might be a decision made nearly 10 years ago by Ehrlich. Ehrlich pledged $700 million in future federal highway funds—now a diminishing source of revenue—to borrow that amount by selling so-called “Garbe” bonds to help shore up the transportation fund. Ehrlich, in effect, dumped the $700 million debt on O’Malley and future governors.

And now the non-partisan Department of Legislative Services, the Maryland equivalent of the Congressional Budget Office, in its review of the transportation budget, questions whether the state “can afford to construct two major transit lines simultaneously even with a revenue increase.”

The DLS review stated further: “It should be noted that the [transportation] department’s own financial plan for constructing the major transit lines assumes a sizeable revenue increase.” Commenting on the commission’s recommendation of a flat 15-cent gas tax increase, the DLS review noted that while the $870 million revenue injection is “substantive, it likely will not fully fund all of the existing transportation needs.”

The proposed Baltimore Red Line is a pie-in-the-sky municipal Tinker-Toy, a desirable but questionable civic ornament. It would run East-to-West roughly from the Security Blvd. area into the city across Boston St. and into Canton and the Bayview Hospital campus, the abandoned East-West Expressway battle all over again. It would be partially underground and above-ground. It is the above-ground section in Canton that has critics most upset where, they argue, the Red Line would be a major traffic impediment instead of a mass transit people mover. Critics of the Red Line further argue that more efficient use of existing mass transit could be made by providing feeder transportation to existing rail stations along the Metro line. They also point to the under-used light rail system as a wasteful burden on taxpayers.

The Purple Line in Montgomery County involves different colorations. Essentially, there are no sections connecting the Orange Line in Northern Virginia and the Red Line looping from Silver Spring to Bethesda in Montgomery County. And instead of a new rail line, that missing link could probably be filled in by overland transportation along existing routes. So chances are that because of the cutback in federal funds and the drain on the Maryland transportation fund neither rail line will be built, at least for the foreseeable future. And you can place the blame on the cost of the Inter-county Connecter linking Montgomery and Prince George’s Counties and the spending policies of several governors. And maybe that’s a good thing.