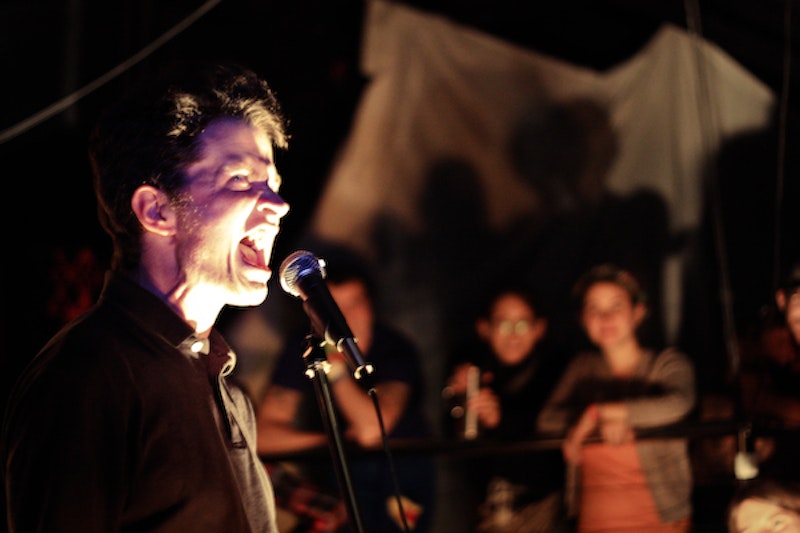 Ed Schrader is a shaman. He’s a transmission from deep space sent to show us what’s wrong with America. He’s Garrison Keillor, David Bowie, Elton John, and an actual talk show host. One floor tom, croons, shouts, soothes. He’s from his own planet. But he still loves the U.S.A. His new tape on Fan Death Records, Welcome to the Roman Empire, is a collection of re-worked and re-interpreted live staples, saloon tunes, and character monologues about the decline and disease of the American empire. If you haven’t seen Ed play, the tape sounds like something you’d find in a hospital or a nuclear power plant, stowed away in a filing cabinet by an obsessive or disconnected weirdo. Ed’s live set is arguably more palatable, despite its visceral intensity: even when he’s singing about beautiful transvestites and predatory lending, he cuts his shrieks and wails with croons as smooth as Bowie himself. Ed Schrader is a human anomaly.

Welcome to the Roman Empire is Ed thus far. Not quite a proper LP—too short, too inconsistent and bizarre to win any laymen over—but it’s fascinating for anyone trying to crack Ed’s weird egg. It starts off with a test recording of some audio equipment at the man’s alma mater, SUNY Brockport, just checking to see that everything works. Schrader was born for broadcast—he sort of sounds like Bill Murray and Norm MacDonald, with a folky sincerity cloaking his relentless deadpan. He belongs on Saturday Night Live, not your local dive bar. “News: if you’re fifty or older, you can now receive the perks of benefit banking at your local—ah, fuck…”

“Wave of the Future” almost sounds like a Station to Station outtake, albeit one without a beat. It might be Ed or not wanking and chorus-y distorted guitar lines under an apparently stream-of-consciousness diatribe against technology and how Hotmail and instant messaging are devaluing life on Earth and making us dumber and more selfish. Unlike a lot of his peers in the Baltimore bizarro music scene, Ed doesn’t care about partying or acting like a baby—he’s, admirably, looking at the world rather than himself and doing his best to eviscerate what’s wrong with it. “Daddy’s Money” is a goofy genre jig about trust fund leeches, and “Hawaii A-Go-Go” describes a dumb schmuck tourist overloaded with travel anxiety. “Blue Stamped Britches” is a vague, minimal pickup song, perhaps the most similar thing here to Ed’s live shows, but live classic “I Think I’m a Ghost” is a redone without drums, just the lyrics supra-nasally: “I think I’m a ghost./I think I’m a ghost./Can’t do things people want the most./Give you bread, I can’t make you toast./This could be the end/Of course you say nice things because you get paid to do it.”

“First Union” is a brilliant monologue done in a Ron Swanson-type Midwest voice without the silliness and airiness of Parks and Recreation or current Saturday Night Live. “My country tis of thee, sweet land of SUV’s, of thee I cringe. Where what happens on American Idol is more important than what goes on in the Senate. Was it me or did I just hear Paris Hilton say ‘apathy?’ That’s hot. Greatest country we are not. Of thee I sing. A land where Walmart is king. Paper or plastic? America you always choose plastic…“ and here he cracks up just a little bit before recovering and continuing with the bit. Ed Schrader is a riot. Anyone who’s seen him live, seen his talk show on YouTube, or met the guy and talked to him for five minutes, knows he’s a brilliant, benevolent weirdo, and it means a lot that what he does has some weight besides outbursts and funny voices for the fuck of it. Schrader has an LP out on Load Records soon, so it’s my hope more and more people start listening to what he’s saying and get beyond those first few nervous and confused laughs. “And now for some good news: if you’re fifty or older, you can now receive the joys of benefit banking…”