Virginia Is For (Straight) Lovers 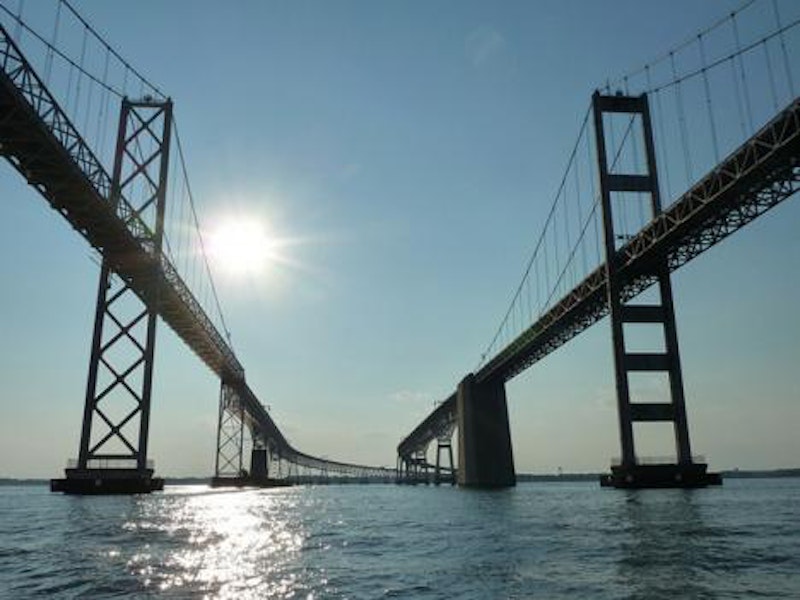 Maryland and Virginia are joined by bridges but separated by ideologies. They share the Chesapeake Bay, blue crabs, the Eastern Shore and are signatories to many regional compacts. And that’s about where the mutual attachments end. No two states are more illustrative of the competing tugs of the nation’s cultural wars or of the militant standoff between the two major political parties and their agendas. Virginia may be for lovers, as an old slogan claimed, but it’s a dangerous place to make love.

Maryland, as every political hobbyist knows, is overwhelmingly Democratic and bluer than cobalt. Virginia became the property of Republicans from top to bottom in the last election, laying siege to the state house, the House of Delegates and the Senate by the single grace of its presiding officer. The two states’ governors are chairmen of their political associations, Maryland Gov. Martin O’Malley of the Democratic Governors’ Association and Virginia Gov. Robert McDonnell of the Republican Governors’ Association. O’Malley’s ambitions are discussed but not revealed. O’Donnell is on the GOP’s very short list of possible vice presidential candidates. The two toss spitballs at each other over party politics and gottcha opportunities but otherwise have an amiable working relationship.

Following the GOP takeover of Virginia, the culture warriors wasted no time in rolling out their priorities. It is, undisguised, a direct assault on women’s rights, an attack on voting rights, gay rights and a relaxing of the state’s already lax gun laws—in short, all of the issues that make conservative hearts go pitter-patter.

In the big-sister gynelinqency that the commonwealth would become, the bedrooms of Virginians have become the focus of much of the state’s legislative activity. The most abusive and intrusive attempt to limit abortion rights is legislation that would require a trans-vaginal ultra-sound procedure as a pre-condition for an abortion. A woman would be compelled, by law, to view the results of the procedure and discuss the consequences of abortion with her doctor. McDonnell has said he will sign the legislation. This legislation is paralleled by a personhood bill which opponents claim would outlaw abortion and ban many forms of birth control. (The Oklahoma legislature enacted a personhood bill last week.) As with similar legislation in other states, the Virginia bill provides that “unborn children at every stage of development enjoy all the rights, privileges and immunities” that apply to people in Virginia.

In Maryland, abortion has been legal since 1971. It had been petitioned to referendum during the governorship of William Donald Schaefer and the attempt to repeal the law was overwhelmingly rejected. There are periodic attempts to repeal or redefine the law by Del. Donald Dwyer (R-Anne Arundel). For medical purposes, the Maryland law states that life begins when the fetus is viable outside the womb. The right-to-life version is that life begins at conception.

The Virginia attempt to relax gun controls would lift the state’s 20-year-old law that limits gun purchases to one a month and allow unlimited purchases. (Studies and statistics show that many guns used to commit crimes in Maryland have been traced to purchases in Virginia.) In fact, New York Mayor Michael Bloomberg dispatched investigators to Virginia to demonstrate how easy it is to exploit Virginia’s gun show loopholes after a New York police officer was killed by a man using a gun purchased in Norfolk, VA. Virginia also has a law that allows individuals to publicly carry concealed weapons. The Maryland gun control law, enacted in 1973, is among the strictest in the nation. It requires a 10-day waiting period and a background check for criminal records and psychological problems. Carry permits are difficult to obtain and Maryland does not grant reciprocity to other states that allow individuals to carry weapons.

While the Maryland General Assembly has effectively voted to grant full citizenship to gay individuals, Virginia is trying to limit those rights by denial. All Maryland needs to legalize same-sex marriage is action by the Senate on the House-passed bill and the signature of O’Malley, who has promoted the legislation, to become the eighth state to authorize gay marriage. The Senate passed similar legislation last year. Gov. Chris Christie (R-NJ), a Catholic, as promised, has vetoed gay marriage legislation a day after it was approved by New Jersey lawmakers. Virginia is moving legislation to permit faith-based adoption agencies to reject, for religious reasons, gays seeking to adopt children. O’Malley and many legislators were moved by arguments that gay families are just as legitimate and loving as heterosexual families. Maryland has no such limitations, and several among the seven gay members of the General Assembly are parents of adopted children.

Thirty-one states now require some form of voter identification and 15 of those require a photo ID. Virginia has 17 voter integrity bills, to varying penalizing degrees, pending before the legislature. Maryland has taken several steps to facilitate voting as a way of boosting election turn-outs while states controlled by Republicans are brazenly attempting to suppress the vote by openly discouraging voting among the young, poor, blacks and elderly, those least likely to have a photo IDs such as a drivers license or a passport. As a novel twist on the issue, an aide to former Maryland Gov. Robert L. Ehrlich Jr. (R) was recently convicted and sentenced for his part in a Robocall scheme to suppress the black vote in Ehrlich’s 2010 attempt to regain the office he lost to O’Malley in 2006. A second aide, consultant Julius Henson, goes on trial this week for his part in the same election-night deception. Basically, legislation discouraging voter participation is just another form of legalized voter suppression.

Another culture war favorite has surfaced in Virginia this year and that is legislation to require welfare recipients to submit to drug testing. This, again, is another Republican effort aimed at the poor who are more likely to be Democrats. The implication is that anyone who is out of work or down on their luck and needs government help is a drug addict. Or, more precisely, the law would reduce the welfare rolls because individuals would be reluctant to submit to drug testing as a qualification.

Finally, there are the delusionary pursuits of Virginia’s hyper-conservative attorney general, Ken Cuccinelli (R). He attempted to subpoena the research papers of university professors in an effort to prove that their conclusions about global warming were falsified. And he was among the first state legal officers to attempt to remove his state from the mandatory requirements of ObamaCare because he considered them unconstitutional. He issued legal opinions that would have forced some abortion clinics in Virginia to close. Cuccinelli has taken forceful anti-immigration and anti-gay rights positions. Cuccinelli is running for governor of Virginia. The Maryland bureaucracy has been working to implement the machinery of ObamaCare since the legislation was enacted last year and the state’s buying exchanges will go into effect soon. And Maryland has strong anti-discriminatory protections for outlier groups such as minorities and gays.

By contrast to Cuccinelli, Maryland’s attorney general, Douglas Gansler (D) helped to pave the way for same-sex marriage by issuing a ruling last year that required Maryland to recognize gay marriages performed in other states as valid contracts that must be honored.

Republicans are quick to accuse Democrats of class warfare, a code phrase that by any other name is still a culture war because of the political party and the groups of people against which it is directed. Americans of any stripe, Democrats and Republicans alike, regard their privacy and their liberty as a bedrock right not to be tampered with. The right is especially appropriate to the bedroom.

An example of that abuse occurred in the middle of the two states, in the nation’s capital, in a committee of the GOP-controlled House of Representatives. Rep. Darryll Issa (R-CA) assembled an all-male line-up of witnesses in a politically-charged hearing on contraception that refused to include not one woman, those most affected by it, but relied on the testimony of clergymen, who know the least about it. Issa, a well-known grandstander and headline-grabber, attempted to turn a reproductive rights and health care issue into a church-state feud, which is pretty much what’s occurring in Virginia. Virginia is for lovers, all right. Just don’t book a hot-sheets motel room there.