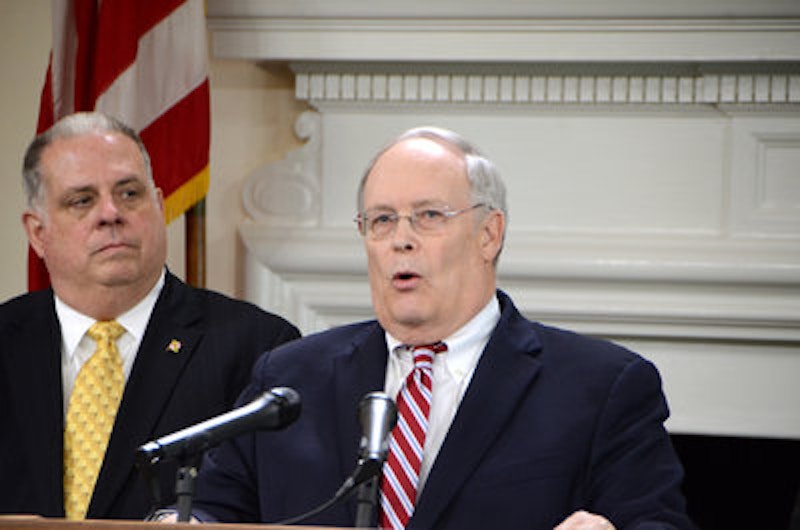 In January of 1969, at the launch of his insiders’ election as governor of Maryland, Marvin Mandel began the systematic reorganization of the executive branch of government that would take more than five years to fashion into the model we live under today, pulling together 248 loose ends into a cabinet secretariat of 12 streamlined departments whose centerpiece was the Department of Transportation and its unified transportation fund.

Mandel botched a second chance to tighten the government bureaucracy in 2002 when he was recruited by Republican Robert L. Ehrlich Jr., in exchange for an implied endorsement of Ehrlich for governor, to take another look at the government organization chart that had ballooned beyond manageability once again in the 33 years since he created it. Mandel caved into those interest groups and bureaucrats who resisted being reorganized to lesser ranks or out of jobs. Nothing changed, and Ehrlich allowed government to continue growing, adding new departments and agencies onto the top-heavy superstructure.

Now it’s Gov. Larry Hogan’s turn to manipulate the mirrors, the assault on government that he’s been itching to undertake all along. Hogan, the second Republican governor since the turn of this century and lineal successor to Ehrlich eight years later, is a different breed of politician, though, more conventional bottom-line businessman than ward healer. He arrived in office on a wave of anti-government and anti-tax fervor that has become Republican party orthodoxy and has helped lead its decline into an obstructionist bloc although, oddly, currently a numerical majority. Hogan organized Change Maryland, a grass roots anti-tax, anti-spending organization of about 75,000 members, which later became the backbone of his successful campaign for governor.

To oversee the latest look at state government’s organization chart, Hogan has enlisted Robert R. Neall, a former legislator as well as county executive, who has served as both a Republican and a Democrat (there’s no mention of his current affiliation). Neall will fill a slot on the governor’s staff as a senior policy advisor.

Neall is a savvy, scrappy government hand and a pragmatic fiscal wonk who will not be swayed by the whiplash of anti-government ideology of many of those who surround and advise Hogan. But Neall is not without his blind side. As a Republican member of the legislature in the 1970s, he fought to block creation of what has become the world-famous Shock Trauma Center. And in the 1980s, in the view of fiscal experts, he bungled reform of the state pension system when a two-tier system was established—one more costly and less beneficial for new employees and a parallel highly profitable older system that continues as an ever increasing annuity for employees who chose to remain locked in. The difference in payouts to retirees is significant.

By Hogan’s count, as reported, Maryland now has more than 20 executive branch cabinet departments (he did not reveal a precise number), 70 independent agencies, more than 550 commissions and boards “and a workforce that has skyrocketed.” That last statement is sketchy hyperbole. The number of state employees was reduced by thousands under Hogan’s predecessor, Gov. Martin O’Malley (D). By contrast, there are 16 federal cabinet-level agencies, with a total president’s cabinet membership of 22, including staff members and the U.N. ambassador.

Nonetheless, Hogan’s office, long before the Neall appointment, had begun a series of conference calls to board and agency heads to discuss cutting fees and, in fact, their necessity to continue existing at all. Most of the boards and commissions are regulatory and primarily oversee consumer protection and professional standards, though they are populated by appointees designated by the governor. The calls followed the adjournment of the 2016 General Assembly session where a number of Hogan’s proposed fee cuts were rejected by lawmakers. Hogan was left only with reductions in the cost of birth and death certificates. A modest cut in the income tax failed in a standoff between the House and Senate.

Then, within a day of Neall’s appointment, Hogan—defying the General Assembly (exactly the end-run that angers Republicans over President Barack Obama’s executive actions)—announced cuts or reductions of 155 fees that he claims will save Marylanders $60 million out-of-pocket over five years. (Disclosure: As a veteran, I am now entitled to half-price admission to state parks under Hogan’s fee adjustment scheme.) What is significant is not the piddling cuts themselves but that many of the boards and commissions depend on the fees to support their functions, such as inspections, testing and licensing as well as support services. This could be the beginning of ideologically driven wholesale deregulation, where reorganization and fee and tax cuts intersect.

An immediate headline and reelection lift may backfire on Hogan if the economy flattens, as many economists are projecting, because the growth rate is stagnant and spending on consumer goods is way down. As examples, Republican Govs. Sam Brownback, of Kansas, and Bobby Jindal, of Louisiana, cut taxes so dramatically that their states ran up huge deficits and debt to near default and have yet to recover.

Reorganization is a time-consuming exercise in turf battles and pecking orders within the government ranks. The bureaucracy is, by its very nature, resistant to change. Every interest group, represented by the departments and agencies of government, insists on a seat at the center of power as a signal of recognition, the cabinet or, a relatively recent introduction, the sub-cabinet. Not one wants to be abolished, left out, downgraded or folded into another agency. Still others fight to preserve their independent identity by not sharing a title with a symbiotic agency. And, above all, none wants to be declared redundant and reorganized out of existence.

Since the initial reorganization in the early 1970s, the size of government remained steady through the early 1980s but began to grow measurably under Gov. William Donald Schaefer (1987-1995) and continued under Gov. Parris Glendening (1995-2003) and Ehrlich (2003-2007). The original reorganization was based on a study, the “Curlett Commission Report”—named for study commission chairman John Curlett, then CEO of McCormick Co.—that had been the centerpiece of Attorney General Thomas B. Finan’s 1966 campaign for governor and rebranded, “A Blueprint for Progress.” It was largely forgotten and shelved when Spiro T. Agnew was elected that year but exhumed by Mandel, who succeeded Agnew when he moved on to become vice president. The reorganization was designed, refined and implemented by two Mandel staff members, Edmond Rovner and Ernie Honig-Kent.

Hogan has governed mainly as a moderate as a necessity to accommodate the lopsided Democratic majorities in the State House and on the voter rolls although his true feelings about government and taxes often glare through the facade. Occasionally he seems to be influenced by conservative and anti-tax advocates such as Arthur Laffer, the supply side economist, and Grover Norquist, president of Americans for Tax Reform, who requires no-tax pledges in exchange for a nod of support. And on other occasions, his policy statements and proposals appear drawn from the playbook of the American Legislative Exchange Council (ALEC), a conservative organization that proposes model legislation in State Houses across the nation.

So it’ll be interesting to watch whether Hogan links additional tax and fee cuts to his reorganization scheme and to see if he is actually intent on eliminating government agencies, boards and commissions or simply realigning them into a more agreeable operating pattern—only to begin burgeoning again.

Hogan’s $54 million reduction in highway tolls and fees may have elicited positive voter response but they also compromised the state transportation fund by reducing its bonding capacity. For example, Hogan rejected a recommendation to replace the aging and inadequate Harry T. Nice bridge, an antiquated two-lane span in Southern Maryland, because of a lack of funds. The General Assembly was outraged and attempted to usurp the executive branch’s decision-making authority over transportation projects. Another example is the lowered tolls on the Inter-County Connecter, where the actual revenues are far below the original projections, placing an additional strain on the transportation fund. Finally, Ehrlich, the last previous Republican governor, issued what are known as GARVEE bonds. They allowed the state to borrow against future transportation funds which means that future transportation needs are in jeopardy while the state is paying interest on money it borrowed against the future to fund current projects.

As Neall observed upon accepting the appointment as reorganization impresario, his job is to fashion a “government for the future, a 21st Century government.” It might be a streamlined government structure which lacks transportation funds to get Marylanders from here to there.