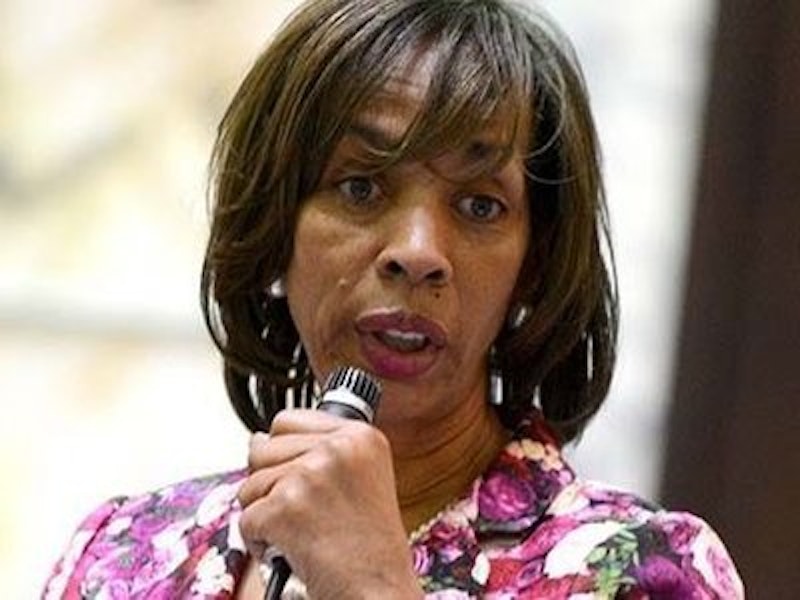 So long, Stephanie. Hello, Catherine. When the keys to City Hall pass from Mayor Stephanie Rawlings Blake to Sen. Catherine Pugh on Dec. 6, Baltimore’s enduring problems will remain the same and all that will change is the face behind the mayor’s desk.

Yes, there are a remarkable number of cranes poking the skyline around the Harbor’s rim, a sure sign that investment and entrepreneurship are alive and well where opportunity presents itself. But no, high unemployment, poverty, drugs and crime breed off each other in an endless cycle in neighborhoods that are far from the waterside’s condos and marinas. For the story of two Baltimores has become a hackneyed yet durable observation of city coexistence—rich and poor, black and white, young and old—so much so that there are even two black Baltimores, one to the east, the other two the west and the two rarely meet.

Rawlings-Blake is correct to say that she hands off to Pugh more of a city on the move than the one she inherited from the banished Sheila Dixon, her predecessor who was ejected from office for getting caught with her fingers in the tambourine. But if anything subtracts from Rawlings-Blake’s elongated (by a year) stretch as mayor it was her attitude, the sense that the nitty-gritty fuss of municipal governance is a bothersome irrelevance when compared with the preeminence of national politics and the allure of network television. Rawlings-Blake, surrounded in office by a sisterhood of girlfriends, often seemed more interested in her coif and couture than in the problems of the people she governed.

Rawlings-Blake dug Baltimore out of the worst snowstorms in the city’s history and presided over the lowest murder rate in memory. Then came the riots and the tragic aftermath of Freddie Gray’s death while in police custody. It was the one event in seven years that truly tested her survival. Rawlings-Blake decided not to run for reelection.

Into the breach stepped Pugh, who tried once before to achieve her dream of serving as mayor but fell short in the popular vote count. Pugh, at 66, is a veteran of what used to be called the classic run of the circuit—City Council, House of Delegates, State Senate. And now Pugh’s going the circuit one better. She’s returning to Baltimore as mayor.

Pugh, in a sense, brings something to the job that Rawlings-Blake lacked, and that is an insider’s connection to the State House. To be fair, Rawlings-Blake succeeded, and Baltimore prospered, under the governorship of Martin O’Malley, himself a former two-term mayor of Baltimore and an ally. For example, she successfully won General Assembly approval of a $1 billion school construction program. Rawlings-Blake’s dealings with Republican Gov. Larry Hogan have been, charitably, cold enough to chill a bottle of Chablis. But Pugh has sniffed the hem of power in Annapolis, and in doing so rose to become Senate majority leader and a protégé of Senate President Thomas V. Mike Miller (D-Calvert) as well as cozy with the corps of State House lobbyists. This could be a blessing as well as a curse. The alignment could reap benefits for the city, or it could open City Hall as inviting new territory for State House lobbyists.

Rawlings-Blake bequeaths to Pugh an overall fiscally improved city government. She fought for modest tax cuts for homeowners (though the tax rate is still double that of any other subdivision) and tax breaks for developers. The uninviting tax burden—wherein one-third of city residents pay all their taxes, one-third pay some taxes and one-third pay no taxes—remains the biggest challenge facing any new mayor. Rawlings-Blake overhauled the municipal health care and pension systems and made significant progress in dealing with the city’s structural deficit.

Rawlings-Blake also eased the way for Under Armour, and the company’s CEO, Kevin Plank, to begin the massive development of Port Covington as well as other swaths of southwest Baltimore that are part of the package. And add to the map Michael Beatty’s Harbor Point development. Rawlings-Blake also helped bring to Baltimore the Amazon distribution center and Horseshoe Casino. Yet the argument persists that the cranes and the tools of development are in the wrong places in Baltimore and until that is corrected the city will continue to be divided.

Pugh inherits the bad as well as the good. As with every well-intentioned newcomer to the mayor’s office, Pugh is determined to close the gap between the two Baltimores. Colleagues have described Pugh as relentless once she settles on a plan or a course of action. In the Senate, for example, she was ahead of the pack on pushing police accountability measures as well as paid sick leave.

But once in City Hall, Pugh will rediscover that municipal governance is less of an abstraction and more of a dirty-hands business, where constituents judge performance by the number of potholes filled, how fast snow is plowed, how often grass is mowed and how visible the mayor is in critical situations. If Pugh needs a stern reminder, surveys taken following the Freddie Gray riots showed that 70 percent of those polled would not vote for Rawlings-Blake for reelection, according to reports. At the time, Rawlings-Blake seemed distracted and slow to react to the violence on the streets, leaving the job of calming the smudged Sandtown-Winchester neighborhood to Hogan and the National Guard.

Taking that as a learning experience, Pugh has given every indication, both during the campaign and after, that neighborhoods will be front and center on her agenda—clearing blighted areas, more affordable housing and including affordable housing in new developments. Also high on Pugh’s list is the reclaiming of Baltimore’s school system, which has been under state oversight since 1997, and remains at the heart of the city’s population problems. Young families who can’t afford private schools abandon the city for the suburbs and their schools.

Yet the one daunting and, perhaps, unsolvable problem that Pugh, and every other recent mayor before her, has had to deal with is the unmanageable and, to some extent, unresponsive municipal bureaucracy. The recent water bill fiasco is a case in point: it has taken weeks, months, even more than a year, in some cases, to correct erroneous billings, mainly because of bumbling bureaucrats.

Cities have cycles. They’re up, they’re down, they wither from inertia and bounce back. But no one has yet to offer a prescription or solution to the netherland of blight and despair that Baltimore is experiencing as Pugh takes office, soaring at one end of the scale with needle-nosed buildings and trapped at the corrosive downside with no place to go but up—if only someone can figure a way out.