Looks like it'll be more of the same this season for Baltimore. 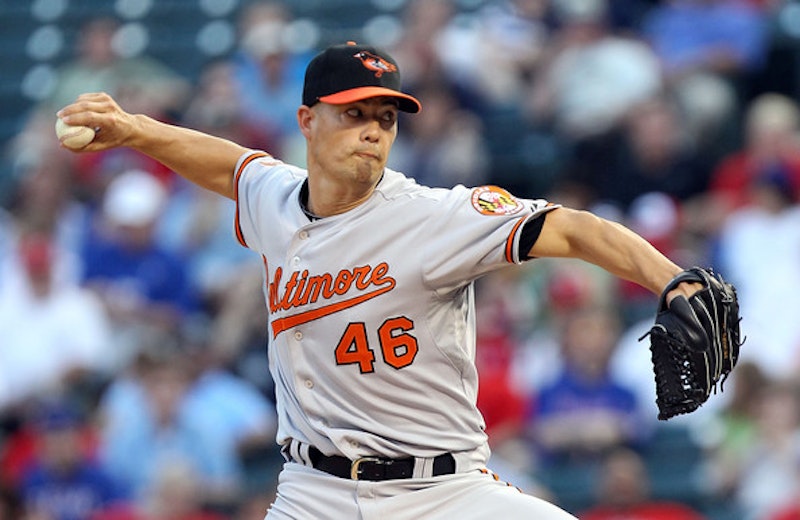 I intended to write a rare, positive piece about the Baltimore Orioles; that is until GM Dan Duquette traded his Opening Day starter to the Colorado Rockies for no apparent good reason. My positive Orioles piece will have to wait until later in the week. The Guthrie deal takes precedence today.

I first heard of the Guthrie trade Monday morning via Twitter. A sportswriter that I follow retweeted Guthrie’s farewell to Baltimore comments, which sent me scrambling back through my feed to figure out what the hell happened. Apparently, after an offseason spent collecting middling rotation candidates Dan Duquette felt compelled to add one more. Unfortunately the addition came at the expense of the team’s only reliable starting pitcher.

Guthrie was dealt to the Colorado Rockies in exchange for starter Jason Hammel and reliever Todd Lindstrom. Hammel was originally a Tampa Bay Ray, or Devil Ray as they were known several years ago, and spent parts of three seasons getting clobbered in the AL East being he was sent to Colorado. Hammel posted solid seasons in 2009 and 2010 for the Rockies before backsliding last season. Lindstrom is a run of the mill soon to be 32-year-old relief pitcher. Baltimore will be Lindstrom’s fourth team in as many seasons.

Guthrie holds a special place in recent Orioles history. He was by no means an ace, but he served admirably as Baltimore’s de facto number one starter for the past five seasons.  Though Guthrie was always more suited to be the third starter on a good team, in Baltimore he was the best pitcher the franchise had since Mike Mussina went to the Yankees.

The Guthrie trade didn’t upset me, few things related to the Orioles actually upset or surprise me anymore, but it did strike me as oddly timed and pointless. I immediately assumed that the deal was for a prospect or two who could restock the barren upper levels of the Orioles’ farm system and offer some hope for the future. You know, a trade that made some baseball sense. When I learned the deal was for Hammel and Lindstrom I thought it must be a cost-cutting measure, only to find out that the deal was a virtual wash in terms of guaranteed dollars. Okay, so the Orioles traded their best pitcher and didn’t get better, younger or save any money. Why exactly did the Orioles trade Jeremy Guthrie?

Guthrie was due to become a free agent following the 2012 season. The Orioles don’t like to pay pitchers and Guthrie had presumably had enough of losing in Baltimore. A long-term contract to remain an Oriole was probably never an option for Guthrie. The Orioles should have traded Guthrie last offseason, but we can’t hold Duquette responsible for the sins of former GM Andy MacPhail. Duquette faced the proposition of Guthrie playing out his deal and leaving as a free agent next off-season.

In essence Duquette traded one season of Guthrie for potentially four seasons of Hammel and Lindstrom, both are arbitration eligible and could be retained through 2013. It’s another move by Duquette to keep the Orioles firmly stuck in neutral, cemented into the cellar of the AL East. The best-case scenario for the Orioles is for Hammel to pitch like Guthrie in 2012 and solidify a spot in the rotation for two seasons, before he departs as a free agent. Worst-case scenario is Hammel pitches like the 2011 version of Jason Hammel and serves as a human piñata for the Yankees and Red Sox. Hammel is just another name to throw into the pile of yawn inducing starting rotation candidates to be sorted through in Spring Training. The Orioles should have kept Guthrie and traded him closer to the trade deadline for the best prospect available and moved on, just as they should have done last summer. The acquisitions of Hammel and Lindstrom, neither of whom are difference makers or likely to stick around past 2013, does nothing to improve the Orioles fortunes this season or beyond.