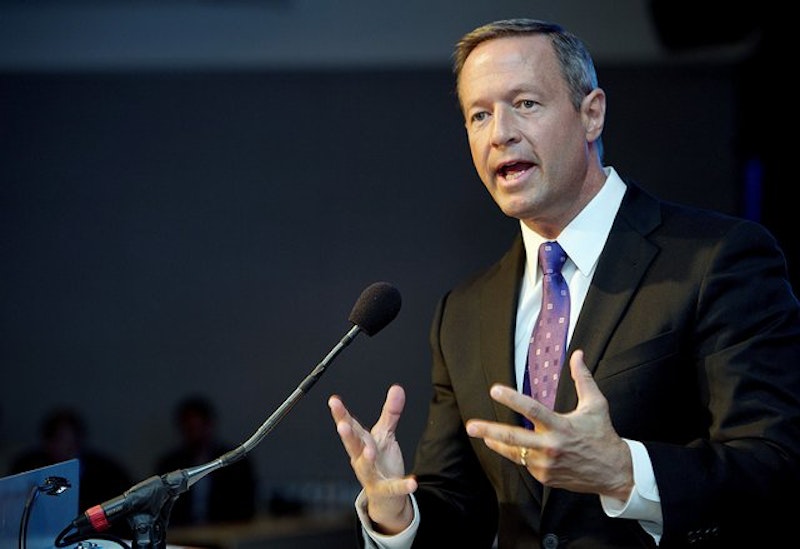 While assembling an aggressive and ambitious program of tax and social legislation, Maryland Gov. Martin O’Malley (D) may have ignored one critical key to success: He doesn’t have to run for reelection but legislators do. And to complicate matters further, many lawmakers will be running from newly reapportioned districts and in a sense representing two districts for the next couple of years, the old and the new. Survival is the primal scream of politics.

But there is the usual conventional sentiment in the General Assembly that this is the year for bold action because voters will forget legislators’ words and deeds by the next state election in 2014 and O’Malley’s final year as governor. That is especially true of same-sex marriage, which O’Malley has made the centerpiece of his legislative agenda this year. The bill’s supporters in the Assembly say that this is the pass-it or shelve-it year because lawmakers fear having it almost certainly petitioned to referendum and on the ballot with them in the state-wide election in 2014. If it wins approval and is petitioned this year, gay marriage will be on the ballot with President Obama in November. Maryland is considered, by legislators’ reckoning, a blue enough state to provide a protective firewall for Obama. Put another way, better to stiff him than them.

More problematic, however, is the pyramid of taxes that O’Malley has concocted to close the state’s recurring structural deficit of $1.1 billion. To do so, he must raise $640 million in new revenue and rely on the Assembly to cut the rest from the proposed $35.8 billion budget. A couple of weeks ago, O’Malley was overcome by case of the druthers—a preference for adding another penny to the state’s six-cent sales tax which would raise about $600 million. But that balloon was punctured immediately. Most people argue that the sales tax is regressive because it falls hardest on those least able to pay. But the reverse of that argument is also true: The sales tax is actually progressive because nobody can escape it or shelter it in the Cayman Islands or Luxemburg. Everybody pays.

Instead, O’Malley has proposed a menu of taxes that is highlighted by a six percent sales tax on a gallon of gasoline that in steps over three years would increase the cost of a gallon by 18 cents or a fill-up by an average of $1.80—the fourth highest tax on gas in the nation. Now, legislators are proposing a constitutional amendment to protect the transportation fund from any other use, such as raiding it to balance the general budget, a dangerous misuse of the constitution and a simple formula that could be written into the funding law. The constitution can only be amended by voters in statewide elections, and tying the hands of future governors and legislatures is a dangerous precedent that leaves no wiggle room in case of emergencies as Maryland has experienced over the past several recessionary years.

That is followed by a proposed increase in the so-called “flush tax,” only this application would be by usage. Translation: The more you flush, the more you pay. No more flat rates for serial flushers. Next, he would cap deductions and limit exemptions on taxpayers earning $100,000 or more which would affect 440,000 Maryland residents, according to a tally of income tax returns by the comptroller’s office. There are a couple of nuisance taxes as well, such as a tax on apps downloads of music and other gee-gaws and flavored cigars favored by teenagers as well as loose tobacco. There is also a repeat attempt to end tax breaks for coal and telecommunications companies. O’Malley appears to be tossing a lot at the wall and hoping that some of its sticks.

But what has county officials riled up is the long-resisted proposal by O’Malley to shift the cost of teacher pensions and Social Security to the counties at an annual price tag of $239 million to the already cash-poor counties. To compensate for the additional revenue burden, O’Malley’s plan would allow counties to share in the increased revenue reaped from those earning $100,000 or more. Even that would affect the local subdivisions disproportionately because of the difference in income levels of residents. O’Malley’s tax grab would even double vehicle titling fees and the cost of death certificates.

What is likely to be O’Malley’s most controversial proposal is his renewed attempt to build wind farms off the coast of Maryland. The proposal’s estimated cost is $2 billion that would be paid for by an increase of $2 in monthly charges to ratepayers. Adding to the controversy is an effort by labor unions to write guarantees into the legislation that would effectively prevent non-union companies from bidding on the massive project. Federal officials, at a news conference in Baltimore that was attended by O’Malley, have approved the idea of wind farms along the Atlantic coast.

The General Assembly has only one constitutional obligation during its 90-day session and that is to enact a budget. O’Malley was correct in his sixth state of the state address when he called upon legislators to make “tough choices.” A poll conducted by The Washington Post last week showed only tepid public support for many of O’Malley’s proposals and downright opposition to others. There is resistance to new taxes except for the tightening of deductions for high wage earners, paralleling Obama’s push to have the rich pay more. Gay marriage, as in most other polls, is a split decision among Maryland voters as it competes with Washington state and Maine to become the seventh state, and the District of Columbia, to legalize same-sex unions. Last year, same-sex marriage fell two votes short of passage in the House of Delegates after narrowly passing the Senate. This year, supporters are relying on O’Malley’s powers of persuasion to provide impetus for passage as resistance from religious groups intensifies. In the hard-currency marketplace of the State House, the issue of same-sex marriage appears to be more of an emotional and moral commitment than a negotiable item such as the promise of a capital project or a length of highway in exchange for a vote.

In the catchpenny world of budgeting, cutting programs is not the easy option that it seems to be. Fully 80 percent of the budget is mandated and must be funded. O’Malley, like many other governors, has been hampered by the economy from engaging in bold programs and big-ticket items that would upgrade his resume and burnish his legacy. As his final term in office winds down to a couple of short years, O’Malley appears to be pegging a part of his future on winning approval of same-sex as an issue of fairness and on the off-shore wind farm as a symbol of progress toward the transition to a green economy. But his entire package is bound together with the theme of jobs, a word he mentioned 50 times in his state of the state address, according to one report. Labor is supporting both. Job creation at the federal level is financed largely through borrowing and deficits. Job creation by the state requires hard cash through tax increases and pay-as-you-go programs because the budget must be balanced. Borrowing through the sale of general obligation and transportation bonds is the state’s credit card to future debt.

“Never watch sausage or laws being made,” Otto von Bismarck observed. Put another way, what goes into a legislative session is not necessarily what comes out. Looking ahead to 2014, the specter of massive tax increases has some lawmakers jittery that the public could stage an uprising as the Tea Party did in other states and repopulate the legislature with officials who pledge to reduce the size of government and spending along with it. Adding to the pressure in a symbiotic voice is the populist message of the encamped 99-percenters who are protesting the inequality in the distribution of wealth. What’s more, O’Malley will not be on the ballot in 2014 to provide top-of-the-ticket vote-pulling power. Therefore, the majority Democratic legislators will not have the unifying force of a sitting governor with the money and the organizational powers of the office to provide a support system for their reelection. The reapportionment map is already drawn and submitted so there’s no chance of retaliation for errant behavior. With O’Malley effectively phasing out his governorship, legislators are very much on their own. Legislators, by their Darwinian nature, protect their own skins and O’Malley could find life at the top a terribly lonely position.