Trade him while his value's still high. 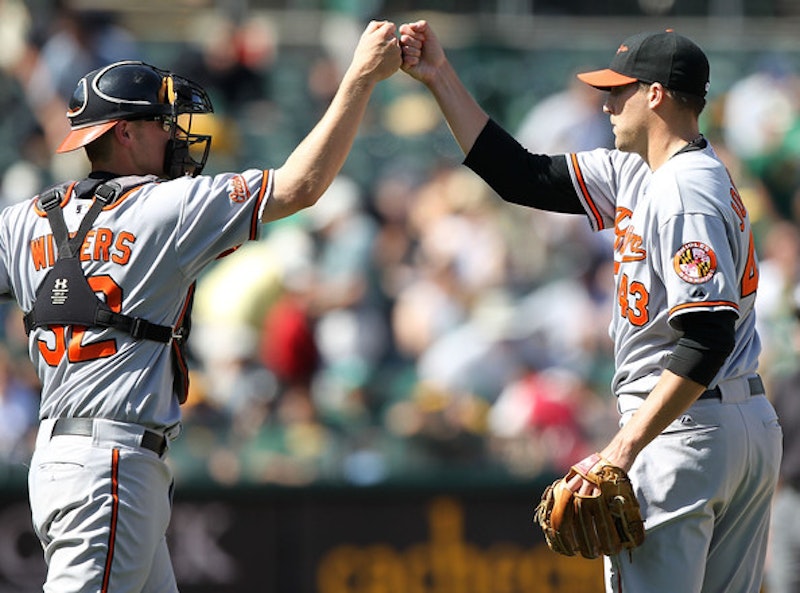 Jim Johnson has been a solid reliever for the Orioles since 2008. He's having a terrific 2011 and has drawn trade interest from the Tigers and others. It’s also been reported that Johnson could actually make some starts for the Orioles later this season, if he's not dealt.

Johnson is in no-man's land in Baltimore. He's a damn good set-up reliever for a team that rarely has a late-inning lead. He came through the minors as a starter but was converted to the bullpen early in 2008. Johnson has only made one Major League start, back in 2006, but some observers have suggested that he could be most valuable to the Orioles as a starter. Hall of Famer Jim Palmer has suggested a move to the rotation for Johnson numerous times over the past few seasons.

At one point I’d have agreed with Palmer, but frankly I think the O's have missed the boat on Johnson. They have wasted his best years by having him pitch the seventh and eighth innings for a terrible club. A decision was needed after the 2009 season. He should’ve been made the closer or moved to the rotation. Either move would have improved his value to the club. As a starter he presumably would have provided 180-190 innings of league average production. As a closer he could have accumulated decent save totals and been spun to a contender for a package of prospects. Instead the Orioles left Johnson in limbo and burned millions in signing Mike Gonzalez and Kevin Gregg to blow their few late-inning leads.

The Orioles ought to deal Johnson to the highest bidder before the July 31 non-waiver trade deadline. At 28 and under team control for a few more seasons, Johnson's value is high and his role has been defined. A move to the rotation at this point in the season sounds exceptionally risky. If no suitable trade offer exists than perhaps some Winter League starts would give Johnson the chance to build up arm strength.

Given the Orioles’ laughable track record of developing young pitchers the idea of moving Johnson to the rotation smacks of desperation. Most of the young starters that were counted on to produce in 2011 have fallen hard and turned Andy MacPhail's "Grow the arms, buy the bats" mantra into a bad punchline. The Orioles are never going to be serious about spending big money on free agent pitchers and the proposed experiment of moving their best reliever to the rotation is further proof. Trade Johnson, Koji Uehara and Jeremy Guthrie for the best arms available. Oh, and make sure those arms are MLB-ready. Any pitcher who spends more than a few months in the O's farm system is a lost cause.