Should Maryland Annex The Capitol? 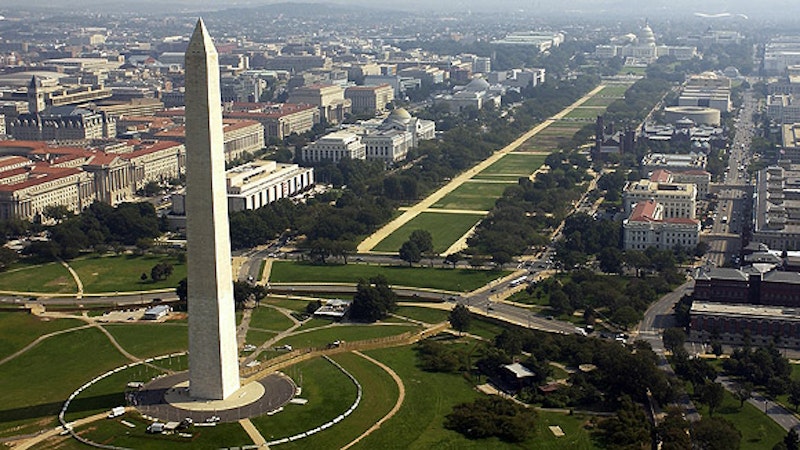 When Maryland donated land to create the federal enclave known as the District of Columbia in 1788, the munificent gesture did not include an agreement to accept it back. Now, 233 years later, frustrated by the District’s lack of voting rights as a federal territory and not a state, an expert on elections wants to incorporate DeeCee into Maryland’s electoral system to share the vote and presumably the problems. To which we Marylanders say: NO THANKS! The Commonwealth of Virginia was smart. It reclaimed the land it ceded for the nation’s capital along the banks of the Potomac River back in 1846.

The idea is not new but occasionally rears its amusing but threatening head. The latest manifestation of the madcap proposal is the handicraft of Curtis Gans, director of the nonpartisan Center for the Study of the American Electorate, and it appeared a couple of weeks ago in an op-ed piece in The Washington Post. Several re-readings of the article revealed no evidence of sarcasm, tongue-in-cheek, parody, chain-yanking or other literary conceits. The tone, in fact, is more one of lament and desperation. So, taken at face value, Gans is deadly serious. He’s been fighting for the democratization of the District for nearly half a century. Gans concedes that the only chance the District has of actually gaining full voting rights and representation is through a complete federal government takeover by Democrats, which only a year ago they had, with a supermajority of 60 in the U.S. Senate and ratification by three-quarters of the states. Call it mission impossible. Short of that, the only other hope Gans sees is to superimpose the District onto Maryland.

By doing so, Gans argues, DeeCee would gain a voting member of the House of Representatives and Maryland would gain a ninth member of Congress. District residents would also be allowed to vote for Maryland’s two senators. The District would also be represented in the Maryland General Assembly and its voters would participate in statewide elections. In effect, the District would become another major city in Maryland, about the size of Baltimore, but would be self-governing and self-sufficient. Gans rambles on and on through the intricacies of taxation and bureaucratic structure and concludes, without a trace of guile or insincerity, that his idea is “a no-brainer.”

A no-brainer? The hell you say. Maryland already has enough crime and corruption, some of it a spill-over from the District into the suburbs around Washington. The District’s new mayor, Vincent Gray, is constantly in trouble and in the headlines for ethical lapses and questionable appointments. And before him, Marion Barry was a piece of work as mayor and continues his reign of outrage as a City Council member. We could almost negotiate a straight player deal—Gray and Barry for Sheila Dixon, former mayor of Baltimore, and Jack Johnson, former executive of Prince George’s County. As a bonus, we’ll toss in Johnson’s wife, Leslie. Besides, there are already nearly 1000 registered lobbyists in Maryland and we don’t need any K Street elbow-grabbers prowling the corners and crannies of the State House. Heck, we’ve already allowed Jack Abramoff, the convicted Washington lobbyist and influence peddler, to do his rehabilitative soft-time at a kosher restaurant in Baltimore.

The District’s ministers of influence argue that its residents pay $3.8 billion in taxes annually yet have no representation in Congress while Congress has excessive authority over the governmental activities of the District. To drive home the point, DeeCee license plates are forged with the slogan, “Taxation Without Representation.” The 23rd amendment, adopted in 1961, awarded the District representation in the Electoral College. Other than that solitary function, the District’s Rep. Eleanor Norton Holmes has little else to do. With even less to do, if anything at all, are what are known as the District’s two “Shadow Senators”—Paul Strauss and Michael D. Brown—and its “Shadow Representative,” Mike Panetta. They are elected but neither officially sworn in nor seated. Nice work if you can get it.

Under Gans’ proposal, the District would get the better end of the deal while Maryland would inherit the sticky end of the lollypop. DeeCee would no longer have to pay for and support administrative functions such as issuing drivers’ licenses and tags, certain tax collecting duties and presumably regulatory and environmental responsibilities. But the reverse is troublesome: DeeCee permits same-sex marriage, Maryland doesn’t (yet); DeeCee gun laws have been upended by Congress and the courts, Maryland’s law is intact; DeeCee has cheap wine, liquor and cigarettes, it costs serious money to drink and smoke in Maryland; DeeCee once threatened to impose a commuter tax on Maryland residents, Maryland went bonkers and threatened to retaliate; the federal presence in DeeCee is all tax-free property, whereas by comparison Baltimore has double the property tax rate of any jurisdiction in the state. Maryland can’t afford any more deadbeat property owners.

There’s another little crinkle in Gans’ dare-to-dream plan of annexation. And that involves congressional redistricting. Every 10 years, as will occur in Maryland in October, legislatures get to re-shape congressional districts, in Maryland’s case eight. What is implicit in Gans’ proposal is that DeeCee’s independent little Duchy would remain sacrosanct and untouchable, guaranteed its own compact district forever, while the rest of Maryland would have to undergo the legalized bodysnatching that takes place once a decade when the maps are re-drawn and the real estate is realigned.

And talk about a clash of cultures. Many of the fancy folks from DeeCee would be uncomfortable sharing space with Maryland. They don’t know how to eat crabs, and in the fancy Washington restaurants they make crabcakes with jumbo lump crab meat, a sacrilege and not the low-end stuff of which a real Baltimore crabcake is made. Over there they play chess. In Maryland we play checkers. In Washington, they wear designer threads. In Maryland, jeans and deck shoes will do. On Corned Beef Row in Baltimore, or at Chick and Ruth’s Deli in Annapolis, the Washington lobbyists would probably be reluctant to eat out of fear of dripping mustard on their Ferragamo ties. Furthermore, Maryland already allows a lot of people who work in the District to sleep in our state.

In 1973, the District of Columbia Home Rule Act was adopted which gave DeeCee more control over its affairs, including, for the first time, the direct election of its mayor and City Council. Up until that time, the District’s mayor was appointed by the President of the United States. As a point of historical fact, in 1964 President Lyndon Johnson offered the appointment to Mayor Theodore R. McKeldin Jr., of Baltimore, as a reward for McKeldin’s breaking with the Republican party to endorse and support Johnson, a Democrat, over Sen. Barry Goldwater in that year’s presidential election. McKeldin declined, telling Johnson that “the job should go to a black.” It did. Johnson appointed Walter Washington.

Less than a year ago, when Democrats were in full control of the federal government, Rep. Steny H. Hoyer (D-MD), then House majority leader, hatched an ambitious plan to give the District a voting member of Congress. He proposed expanding the size of the House of Representatives to 437 members from its current 435 seats. His plan would have given the heavily Democratic District one voting member and awarded Republican-leaning Utah a second seat as an attempt to broker bipartisan support. But Republican amendments to the bill would have striped the District of its right to regulate firearms, which they later partially lost in the courts, and Hoyer withdrew the bill. Gans is correct. For Maryland, it’s a no-brainer.