Mayor Stephanie Rawlings-Blake's tax cuts promise to give back money Baltimore doesn't have. 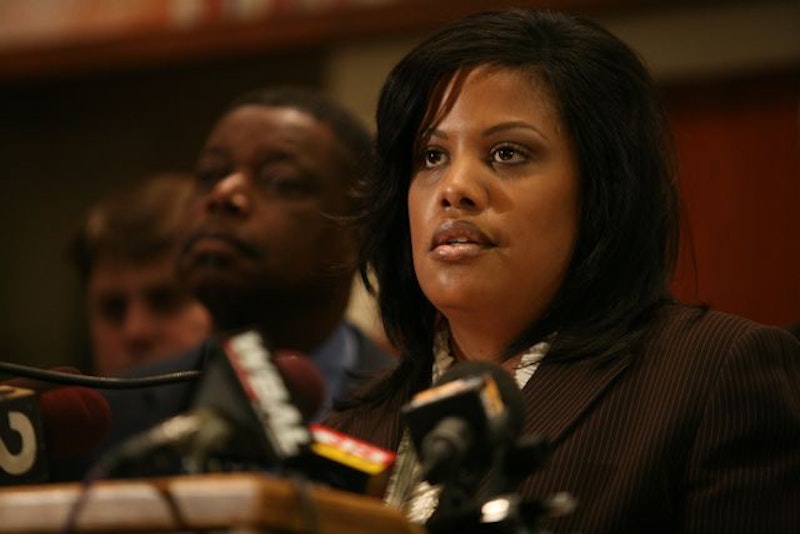 The tax assessor is the stalking horse for elected officials. So when Mayor Stephanie Rawlings-Blake promised to cut Baltimore’s property tax rate by nine percent over nine years, she said nothing about corresponding increases in assessments that would all but wipe out the cuts. Incremental tax cuts rarely work because there's an opposing market force working against them: the value of real estate.

What’s more, Rawlings-Blake is delivering the cuts with money the city doesn’t yet have, and when it finally arrives it could be a source of diminishing returns. The cuts would begin in 2012 by using 90 percent of the city’s share of slot machine proceeds from a casino that doesn’t exist and whose franchise award has been delayed another two months. To further confound the non-existent financial tableaux, proceeds from Maryland’s only functioning major slots emporium, Hollywood Casino in Cecil County, have been steadily declining, attributable mainly to the scarcity of recreational dollars because of the faltering economy and most people’s unwillingness to gamble away food and gas money.

Rawlings-Blake’s tax cut proposal, to state the case charitably, is poorly conceived and ill-advised by whoever was given the assignment to bail her out of a political mess. She appears to have been stampeded into proposing the cuts by all the campaign flak around her and by a couple of academic know-nothings who promote the madcap notion that reducing property taxes will somehow transform Baltimore into Boston or San Francisco as if municipal finance is akin to a magical Harry Potter movie. It’s the old trickle-down economics idea of less is more—less revenue will produce a bigger and better Baltimore. Dare to dream.

The other candidates in the Democratic primary election for mayor—Otis Rolley, former city planning director, State Sen. Catherine Pugh, Jody Landers, former City Council member and vice president of the Greater Baltimore Board of Realtors and Court Clerk Frank Conaway—have all, to one degree or another, made property tax cuts a major issue and the centerpieces of their campaigns. Rawlings-Blake got her headline but little else in the way of agreement or applause for a raggedly thought-out plan.

Baltimore’s problem is not so much its property tax rate but other issues that are unique to municipalities and do not exist in Maryland’s 23 counties. Another factor is state law, which ties property tax payments to income levels. In Baltimore, unlike the counties, fully 42 percent of the property in the heart of the city is owned and occupied by non-profit organizations that are exempt from property taxes—churches, schools, universities and colleges, hospitals, nursing homes, non-profit foundations and organizations. In fact, Baltimore has made an economic development priority, for whatever cockamamie reason, out of luring and retaining non-profits to the city such as the Anna Casey Foundation and Catholic Charities. In the counties, where the property tax rate is half that of the city, the real property is mainly housing, malls and offices—all taxpaying entities.

Another contributing factor is the homeowner’s tax credit, or what used to be called the “circuit breaker,” that is state law. As the law is applied to Baltimore City, one third of the residents pay all of their property taxes, one third pay some of their taxes and one third pay no taxes at all. The law was originally based on age as a way of protecting elderly homeowners from being priced out of their houses in neighborhoods that were being gentrified such as Federal Hill, Fells Point and Canton. The homeowner’s credit law was later shifted from age to income whereby an individual earning less than $30,000, or a couple with income less than $60,000, would get credits against property taxes in inverse increments as their income declines below the caps. Put another way, the less money a person earns, the less property tax the person pays. At about $15,000 in income, property tax becomes zero. And add to that the fact that there are 20,000, 30,000, 40,000—who really knows how many?—abandoned houses in Baltimore that are off the books.

In every municipal election, the city’s property tax rate is a hot potato. And Rawlings-Blake has responded by promising to give back money she doesn’t have and may not get for a while to come. Basing Baltimore’s fiscal structure on the whim of a slot machine is risky. That’s why when the Maryland Lottery was established, the law was written so that the state could spend no Lottery money until 18 months of proceeds were in the bank. This was done so that if Lottery proceeds fell short of projections they would not have to be made up out of general funds. But Rawlings-Blake has a back-up: If property taxes fall short because of rate cuts, the assessor will, invariably, always jack up the assessments.

The dirty little secret is out. Maryland has always liked to brag that it was immune to the whims of the national economy, especially recession, because of the diversity of its industry and its workforce. Moody’s Investors Service has just given the state a swift kick in the shins as well as a severe dose of culture shock. Maryland could lose its vaunted Triple-A bond rating, a celebrated seal of approval for 50 years and one of only five states in the nation with the cherished imprimatur, because its economy is considered too reliant on federal dollars and the huge federal presence in the state.

Fully 26 percent of Maryland’s workforce is employed by some level of government—federal, state or local—with about 150,000 employed directed by the federal government. Maryland is also host to many federal installations and government contractors. Johns Hopkins University and its affiliated campuses is the second largest recipient of federal grants in the nation. Comes now even more bad news. Maryland’s latest unemployment rate, which traditionally lags far behind the national jobless numbers and still does, was reported at seven percent, just 2.2 points behind the federal count of 9.2 percent.

The warning by Moody’s of the downgrade was made in the event that the United States defaults and loses its top bond rating because the Congress and the White House will have failed to deal with the nation’s growing debt and failure to meet its obligation to pay its bills. That said, Maryland was forced to delay the scheduled sale of $518 million in school construction bonds and $200 million in bonds to refinance existing debt, a total bond sale package of $718. The mere threat by Moody’s could have boosted the interest rate Maryland would have to pay on the sale, adding to the state’s already soaring borrowed debt, not unlike the federal government. For years, Maryland has enjoyed low interest rates on the money it borrowed because of the Triple-A rating. Maryland uses the gimmick of selling new bonds at low interest rates to retire older bonds that carry higher interest rates.

Interestingly, for years the defraying of bonds was tied directly to the state’s share of the property tax rate, which was adjusted upward or downward annually every May to meet the bonded obligations. Bond-holders knew they would get their money because it was in the bank because of dedicated property tax collections. Back then, Moody’s, Standard & Poors and other bond-rating houses, represented bond buyers and not bond sellers. But in the mid-1970s, the bond-rating houses reversed course and found a new source of profits. They began to represent bond sellers instead of buyers. So the State of Maryland, and other states, pay fees to Moody’s and others to spread words of praises about the trustworthiness of their bonds. Now, when rating bonds, the property tax is only one of many factors that are considered when Moody’s and others rate state bonds, as Maryland discovered last week when its cozy reliance on the federal government was outed.