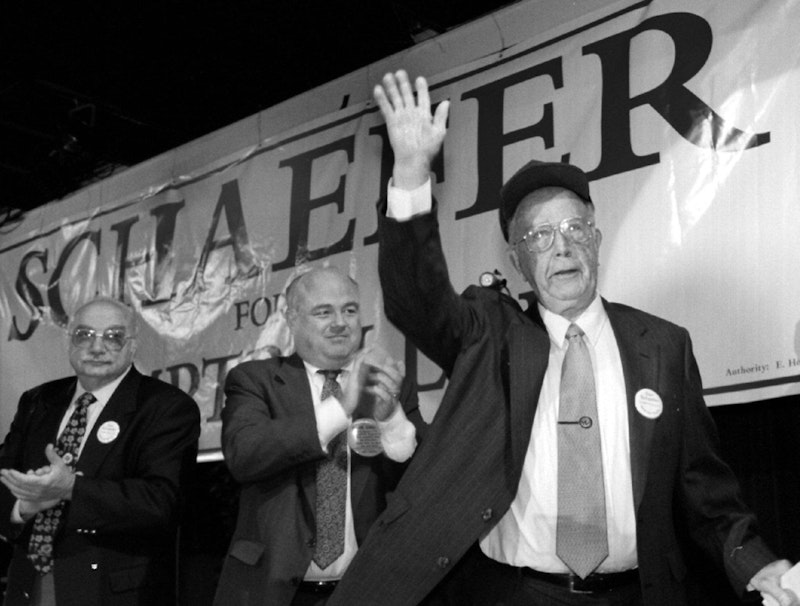 William Donald Schaefer was a piece of work. There’s a powerful image of Schaefer waddling out of City Hall, frowned face down, hands cupped over his ears and being chased by that eminent civic busybody, Walter Sondheim, who is shouting, “But Donald, you have to ... ” and Schaefer screaming back, “I don’t want to hear it.”

And another memorable moment occurred when a reporter with a sensitive question waited until the end of the news conference to blurt out the zinger: “That’s the dumbest damned question I’ve ever heard,” Schaefer fumed as he stormed out of the room, effectively shutting down the news conference. More often than not, he approached a news conference by “flipping the bird” to the assembled reporters. They returned the affection by nicknaming Schaefer “Mayor Annoyed,” pronounced rapidly to sound like paranoid.

That was Schaefer—idiosyncratic, outrageous, persnickety, irascible, moody, quirky, unpredictable, and yes, sometimes mean and nasty—but always treading the invisible line between yanking our chains and being deadly serious. It was difficult to tell which extreme of a mood swing he was straddling, for the stern Dutch-uncle scowl rarely changed. Schaefer never rewarded. He only punished. And he didn’t give a fig about who got the job done as long as he got the credit.

Schaefer, as every political hobbyist knows, was a neighborhood activist who entered politics through the Citizens Planning and Housing Association (CPHA) and the patrimony of political major domo Irv Kovens. Schaefer’s political hallmark as Mayor was his ability to superimpose the neighborhood organizations onto the political organization to become the Schaefer organization. But it was Kovens’ clubhouse that brought together City Hall and the State House under Gov. Marvin Mandel. Kovens often acted as a point-man and intermediary for the contradictory impatient and reluctant Schaefer. Kovens’ primary assignment was to elect 10 friendly City Council members, a majority of what was then the 19-member council, who would offer little resistance to Schaefer and his programs. Kovens did it with money and favors.

It was a perfect partnership, a marriage of convenience and great expectation that was made not in heaven but in the precincts and back rooms of Baltimore’s political subculture. Mandel and the state poured billions of taxpayer dollars into Baltimore. Mandel built the three building blocks of Baltimore’s renewal—the World Trade Center, the Convention Center and the Baltimore Metro system—without which it is doubtful that the resuscitation of downtown Baltimore would have been possible on the grand scale that it was. To further aid Schaefer’s impecunious city, Mandel arranged for the state to supply the city with hard cash by purchasing assets that it could no longer afford to support—Friendship Airport (now Baltimore-Washington Thurgood Marshall International Airport), the Baltimore Transit (Bus) System and City Hospitals (now Bayview Medical Center)—approaching a total of about $100 million in 1970s purchasing power directly into the city treasury.

And with President Jimmy Carter in the White House and Robert Embry at HUD, UDAGs (Urban Development Action Grants) became the equivalent of presidential walk-around money, i.e., the Hyatt Hotel was built with UDAGs as were many neighborhood projects. For years, Schaefer resisted reviving the Inner Harbor against the blandishments of the city’s business community under the direction of the Greater Baltimore Committee and its founder, James W. Rouse and William Boucher, its executive director. Finally, when Schaefer became so anxious to build a visible monument as well as create a tourism magnet, the city spent $18 million on infrastructure costs and awarded the Rouse Company a sweetheart lease that enriched the landlord but left the city bereft of a share of the largesse. The late comptroller, Louis L. Goldstein, used to say that his antidote to “Do It Now” was “Stop and Think.” In the end, by 1986, when state and federal funds dried up, Schaefer decided to run for governor and pass on the city and its troubles to someone else.

Schaefer was the king of kitsch—from the ties that he wore to the tongue sandwiches from Attman’s deli to the “snoutburgers” (a concoction prepared from the usually inedible snouts of soft-shell clams) offered by Connelly’s seafood shack which he demolished to make way for Harborplace, to the Hilda Mae Snoops fountain on the governor’s mansion lawn in Annapolis. Schaefer succeeded in wrapping himself in the city as if the two were one and the same entity. Attack one and you attack the other. As much as anything else—the bricks and mortar, the litter patrol truck, Trashball, Pink Positive, the City Fair and all the other municipal gee-gaws and Tinker Toys—Schaefer was celebrated as well as maligned for the madcap way in which he blew off steam, “Schaefergrams,” the personal notes, scrawled and often illegible and lacking the requisite verbs, that he fired off to what he considered offending constituents: anyone who disagreed with him. Herewith is my personal collection of eight, on gold-embossed governor’s official stationary, accumulated in the late 80s and early 90s during my time as a columnist for The Evening Sun and City Paper. (The underlines and quotation marks are Schaefer’s.)

I know I am the only person you can center in on. However, it’s time to look for another “patsy.” You are the last of the Schaefer Bashers & it’s time for you to join the “other” side of the story.

You seem to “use” me as a scapegoat for your columns. It would be bad enough if you knew what you’re writing about. Your latest column on 10/1/92 is the usual innuendo filled verbiage. Try to find another fall guy.

P.S. Tony Piccinini had to “call you down!”

As you know, I no longer read your column. It is always the same—hitting the Governor time after time with the same old stuff. However, I see that one other person does read the paper. He is similar to you—sarcastic. Thought you would enjoy a fellow “columnist.”

Mr. DeFilippo has you pinned right—you are a damned liar with your hands in the hog trough of taxpayer funds. Now we are about to witness a regal trip to the Orient for a summer vacation.

I’m quick to jump on you when I don’t like your column. You’re [sic] “governor smudge” column is very good and so true.

Why are you such a bitter man? What’s happened to you? Is what they say about you true?

Here is a copy of a letter to the editor. Why don’t you pick on someone else for a change?

P.S. You NEVER write a positive [sic] about me. I had a couple of chances to “hit” you in the past—but I do not do that to supposed friends. There must be something or someone else you can write about.

The attached letter to the editor read:

I wish Frank A. DeFilippo would stop belly-aching and complaining about the best governor in the United States—William Donald Schaefer! DeFilippo’s article, “Schaefer has only one person to blame” is a lot of nonsense. Voters know that we are lucky to have a man like Schaefer.

I do not read your column in the City Paper. Unfortunately, it was sent to me [sic] someone who was also very uncomplimentary about you. It’s sad—you used to be such a decent guy (I thought, others disagreed). It must be tough for you to look in the mirror now days [sic]. Personally, I still think there is hope for you if—

This will acknowledge receipt of your personal note to me and I want to say that I am baffled not so much by its content as I am by its tone.

May I respectfully say, sir, that you and I both know that I have been a long-time friend and admirer of yours as well as a supporter of the many good things you have done and the worthwhile programs you have proposed.

As we both know, this bond dates back to my own days in the State House when you were first elected mayor and the job of rebuilding Baltimore began.

By your own admission you do not read my column in the City Paper. But if you had, governor, you would know that since the General Assembly convened in January, I have written a number of columns defending your actions on the budget.

I want you to know that while we may occasionally disagree on some small matter of policy or style, my respect for the integrity you bring to the office of governor is in no way diminished nor is my admiration for the energy and determination you demonstrate as a public official.

May I add that I will be happy to meet with you to discuss any further concerns that you might have.

I trust that this communication will be treated with the same confidentiality that you requested in your note to me.

May William Donald Schaefer rest in peace. He certainly had no time or patience for it here on earth.