Another redevelopment disaster in the making. 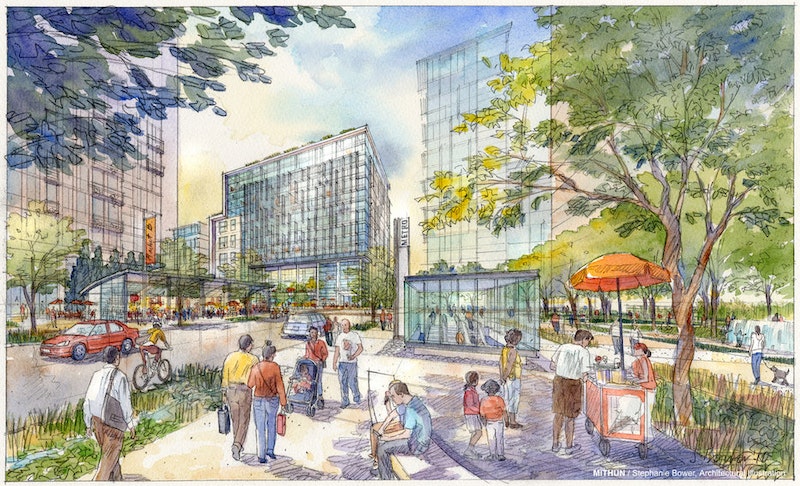 In case you missed it, the first hour of today’s Midday With Dan Rodricks was all about Baltimore redevelopment projects, a conversation mostly focused on the much-lauded State Center project as well as various proposals to overhaul most of the major construction projects of the 50s and 60s: bringing downtown stretches of the Jones Falls Expressway down to ground level, for example, since having it up like that cuts off East from West.

I don't much follow local politics, so I hadn’t heard of the State Center project, but it sounds like Harbor East Part Deux, which is shorthand for Yuppie-White-Dude-Shit-I-Don’t-Care-About. You can check out all the plans at the official website, including the Sim City 3000-looking sketches, where middle-class diversity reigns, and everyone is happy and healthy, their days spent in blissful family-oriented consumerism.

According to The Sun, they’ve already leased out more than a half-million sq. ft. of office space to some state agencies, so whatever brings the jobs and the money helps our troubled economy.

Mostly I don’t care because it’s all happening downtown. I almost never go downtown anyway, probably because dinner at the Cheesecake Factory and drinks at one of Fed Hill’s douche-bars is about the worst way I can think to spend a night, IMO. Sorry, there I go again, my whole indie artsy holier-than-thou-ishness. But look, if we get down to it, pretty much the only reason I live in Baltimore is because it’s ugly and trashy. Most of my friends are the same way. I don’t want to live across from a Starbucks, above a Whole Foods, and next to an Applebees. If I did, I’d pack it up and move on down to Silver Spring. Ugly and trashy means cheap, as in cheap rent. It’s what every dumbass Weekend in Baltimore big newspaper columnist writes about:

But most importantly, the artists brave enough to live in crumbling Baltimore have had the courage to take their culture into their own hands. They're up to their elbows in local festivals such as Artscape and Whartscape and the Transmodern, and there's hardly a loft building in the city whose residents haven't set space aside for showing art.

Nevermind that Artscape is actually put on by the city (and sucks ass) and this past summer’s Whartscape was the last; part of me wants D.C.-ers and others to always think of Baltimore as “crumbling.” It’s what keeps them out of here. It’s what makes Baltimore Baltimore, and not just another suburb of D.C.

Here’s when I do really start to care: Two projects that have come up in the past couple of years, the 25th Street Station, aka, Hello Wal-Mart, and the various Hekemian & Co.’s Rotunda plans: which, before the recession, was originally a $130 million project involving condos and apartments, kind of like a small-scale State Center.

Benn Ray (The Mobtown Shank) and others have already argued more passionately than me against both of these projects, and the crux is that Hampden, as well as neighborhoods like Patterson Park, are already working models of community-oriented redevelopment. Sure there’s still problems, but 36th St., for example, is a huge success story. So why is every redevelopment project another version of overpriced apartment complex atop a Big Box store? Make it easier to open and operate a small business and let the community come together to support it. That’s sustainable growth.