The Warm Harmonies of A Cat Called Cricket 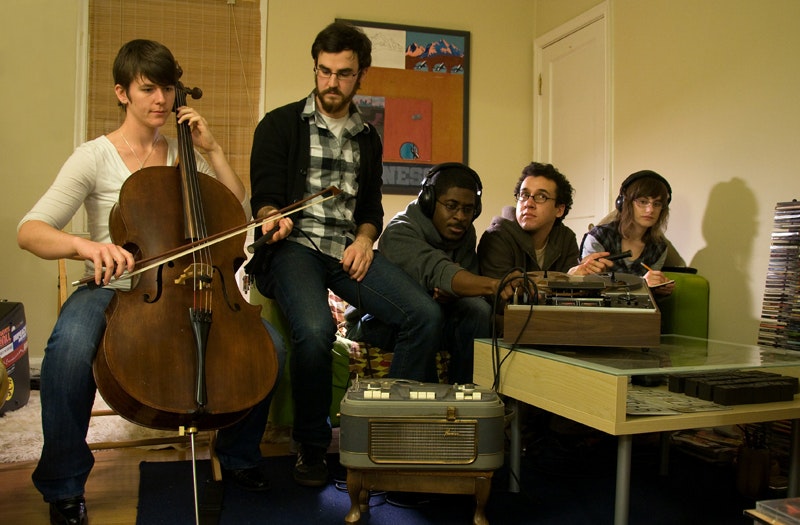 Not all intimacy is created equal—in terms of musical performances, that is. Some bands create magic regardless of where they’re plugged in; some venues can turn any haggard group of wannabes into flush maestros. Most great shows are a combination of the two.

Several years ago Lloyd Cargo and I schlepped into downtown Detroit for an Extra Golden concert at the hard-to-find Bohemian National Home. The band started late, simply because no one was there save Lloyd and me and a few other enlightened souls. The venue itself is a cavernous auditorium, with rafters and a ceiling so high it was hard to see where it became a roof. No digital effect, tube-driven pedal or analog recording device can approach the quality of reverb we experienced that night. Wave after wave of organic, oceanic sound filled that cavernous hall. Seated at a small café table—the next-closest audience member 10 yards away—it was a near-religious experience.

Now, Extra Golden is a fantastic band that sounds great pretty much anywhere that will have them. But the combination of a superior venue and superior musicality (and, perhaps, the fact that there were no more than 10 people in a 100-plus capacity space) was and is unbeatable.

This past Thursday I had the great pleasure (and unexpected assignment) of recording a microshow at Mobtown Studios (a sick friend called me at the last minute to record the show as a freelance gig), a row house-cum-recording studio and venue run by producer Mat Leffler-Schulman and designer Emily Leffler-Schulman (husband and wife, respectively). Baltimore band A Cat Called Cricket was on the docket, and their performance in front of a crowd of, oh, 20 people was warm and welcoming—just the kind of vibe you’d expect from something called a “microshow.” The audience was full of personable and chatty people sitting cross-legged on the floor, and the sound quality was incredible. (Though I should point out that being in possession of a good quality sound recorder, boom mic and headphones put me at a slight disadvantage over my fellow mortals.)

Since I was focused on keeping the audio levels from spiking into the red (and wincing every time someone cracked a beer—it sounded like a gunshot in my headphones), I couldn’t concentrate as much on the music as I wanted. Thankfully, the following night the band played an EP release show around the corner at 2640, the Red Emma’s-owned performance space (and former church) in Charles Village.

Lazy night in Baltimore from James Rasp on Vimeo.

I’ve seen a few shows at 2640, so I was aware that it bore similar characteristics to Detroit’s Bohemian National Home: exposed brick and rafters surrounding a cavernous performance space. For a folk band that features a cello in its basic line-up—and incorporated an additional cello and a violin for a large portion of the show—they could not have asked for a better venue.

The arch top guitars, stringed accompaniment and shallow-hulled snare drum found a life of their own above the audience’s heads, filling the clerestory windows and illuminating by strands of Chinese lanterns and (sometimes flickering) Christmas lights. The stained-glass windows were stained with nicotine and age, and the cross-beamed ceiling could have passed for a waddle & daub creation straight out of the middle ages.

Early in the set, frontman Alex Champagne sang the refrain, "Just remember that the sun will rise again," over and over, and that repetition set the tone for the rest of the night: an all-encompassing comfort of earnestness. The song "When Leaves Fall"—the drums washed out in reverb—was a slow plod of a patient groove; it felt like the swell of fall, the small slip to spring.

Overall a slightly better live mix was needed for this grandiose bear of a venue. At times the percussion and vocal were taken over by the walls of sound, and yet Champagne’s archtops chimed like small, clarion church bells, the snare a full phalanx of troops and the songs washed into each other in a an affirming blanket of sound. Hell, even the rare slipped notes sounded good.

“While You Sleep” is perhaps my favorite track, off their record Here Comes Another Melody. It has that acoustic bounce that, in the hands of lesser musicians, comes off as the stuff of unglamorous college open mics. Amy Reid’s backing vocals (occasionally lost in the live mix) were beautiful counterpoints to Champagne’s lyrical work; drummer Austin Stahl provided a metronome-like framework for the entire set. The song "Four Walls"—with obvious help from the venue—set a new standard for awesome tambourine accompaniment.

At one point Champagne sang, "This city is smaller than we think," and I thought about a woman I met at the microshow who I then ran into at the Baltimore Bike Works and then saw once more at the Sunday show. Since I moved here over two years ago, I’ve found comfort in the way the art, music and performance scenes in Baltimore ebb and flow into each other. I see the same people at Metro Gallery openings as I do at shows at the Golden West as I do at the Visionary Art Museum.

It was Alex Champagne’s birthday, and he said at the beginning he just wanted to play music with his friends. A Cat Called Cricket evokes that wonderful sense of small-timore, of a community of people happy to experience art and music together day after day, show after show. The band’s set ended as it began: a pocket of harmony, if not groove, an emotive crescendo with stringed instruments and a whispered landing.