No matter who's elected Tuesday, the next MD Governor will have some hard choices to make. 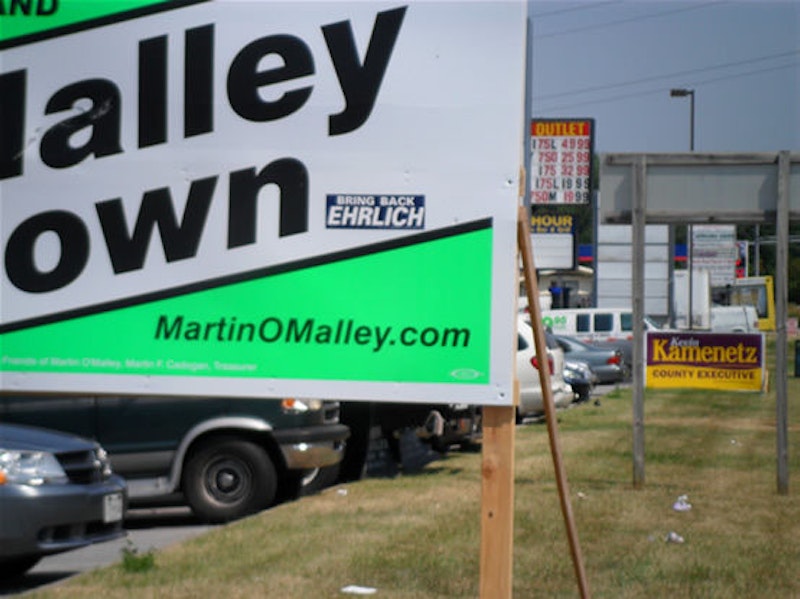 Whoever wakes up as the next governor the morning after Election Day might want to call in sick rather than accept the job of shoveling Maryland out of the financial hole it’s in. Robert L. Ehrlich Jr. (R), who still believes less is more, made a flat-out promise of no new taxes plus a hollow pledge to repeal the penny sales tax increase of a couple years ago. He’s fudged on fees, though, as he did in his last turn as governor.Gov. Martin O’Malley (D) at least had the courage to duck such a stern commitment because he knows better. He is, as gamblers like to say, keeping his options open. All of which is to declaim that, one way or the other, it’s likely to cost more to live in Maryland next year—probably to drink, drive, buy a new car and be in business.

To begin with, there is the matter of the $1.6 billion structural deficit that keeps lingering like a stubborn sinus infection. It exists because the programs we all enjoy and cherish don’t get any cheaper year after year but, in fact, contain built-in multipliers just like any family budget or grocery bill. This is compounded by the bullet-proof shield around 80 percent of the budget that comes under the heading of “mandated” funding, which renders the programs all the more difficult to eliminate or cut. To try would require repeal and reenactment of the laws with lower funding limits. Good luck with that.

Next, the state’s vaunted transportation user fund is broke and is being barely sustained by shifting revenue from the state’s general fund sales taxes into the special transportation money pool. Ehrlich was right about one campaign issue, though. O’Malley has proposed building two rail systems at a cost of nearly $4 billion, the “purple” line in Montgomery County and the “red” line in Baltimore, with no money to pay for them and only the dim hope that the federal government will pony up a large share of the costs. This is nothing more than a munificent gesture in a pauper’s will.

And here comes the cropper. The state pension system, like every other public pension fund, is roughly $30 billion below its liability level through nobody’s fault but Wall Street’s. What this means is that, theoretically, if every member of the system decided to retire tomorrow there would not be enough money to cover them for as long as the actuarial tables say they’ll live. It won’t happen, of course. Ehrlich, being a Republican, wants to switch to a semi-private system while O’Malley is waiting for the recommendations of a study commission.

Finally, the millions upon millions of dollars that have been drained from special and reserve accounts such as “program open space” the “local income tax account” and the “flush tax” will have to be repaid to replenish the money pools for use as the funds were intended. There’s enough blame to go around on this one. Both Ehrlich and O’Malley borrowed heavily from the accounts in good times and bad. But O’Malley went beyond mere borrowing by shifting the purpose of the flush tax—the upgrading of sewage treatment plants—to the bonded side of financing instead of pay-as-you-go which amounts to buy-now and pay-later. And Ehrlich broke the barrier as well by pledging future federal highway funds as collateral against borrowing for transportation projects.

As if all of that weren’t enough, the state has just about reached the limits of its bonding capacity. It now has nearly $8 billion in outstanding bonded obligations, debt that has to be paid down. The General Assembly can raise the limit, of course, but that could compromise Maryland’s Triple-A bond rating—one of six in the nation—which has become something of an expensive joke since the bond-rating houses have shifted their Wall Street hustle to representing the bond sellers instead of the buyers. It used to be that the state’s share of the property tax was dedicated to paying off bonds. But that measure of security is long-gone, too, as bond rating houses now consider a state’s total financial picture, often on the whim of a long-distance phone call.

So it’s a safe wager, with the election out of the way, that there will be some form of a tax increase next year, if not multiple layers of hikes, to offset the shortfall in revenue due mainly to deep slumps in the income and sales tax collections. There is, tucked under somebody’s desk blotter, a wish list of a combination of taxes that could produce up to a half billion dollars a year if every suggested tax were enacted.

Topping the list is an increase in the gasoline tax to replenish the transportation fund. This would, in turn, free up the sales tax proceeds that are now being diverted to support transportation projects. Next would be an increase in the alcohol tax. The battle over the alcohol tax is likely to be whether to use any increase for general fund purposes or to dedicate the money—a dime a drink—to special health care programs, as Vinnie DeMarco and several of the beneficiary charities and unions propose. And for the gazillionth time, there will no doubt be an effort to increase corporate taxes. Also on the menu is consideration of restoring the titling tax on automobiles to apply to the purchase price of a new car instead of the lesser value of a trade-in. The application of the tax was shifted at the request of the automobile industry to encourage sales.

All in all, Maryland’s fiscal condition is not a very pretty picture right now but it’s a lot more sustainable than most. The job ahead is a heavy load for a new General Assembly, but the first year of a four-year cycle is a good time to get the dirty work done: The new kids on the block haven’t learned “Roberts’ Rules of Order” yet and are very much beholden to veterans for tutorials on the process of legislating. And in four years, time for another campaign, it’ll be pretty much forgotten just as O’Malley’s sales tax increase has been, for the most part, irrelevant as an issue.

Ehrlich never said how he would replace the $600 million Maryland would lose by repealing the sales tax increase. And O’Malley has never disclosed which taxes he would raise to begin clawing at the structural deficit. In either case, we are about to find out. Is there any doubt, at this point, who from?