Stand By Your Man

The Obama Administration, the DC political establishment and the state of Maryland overlap more than you think. 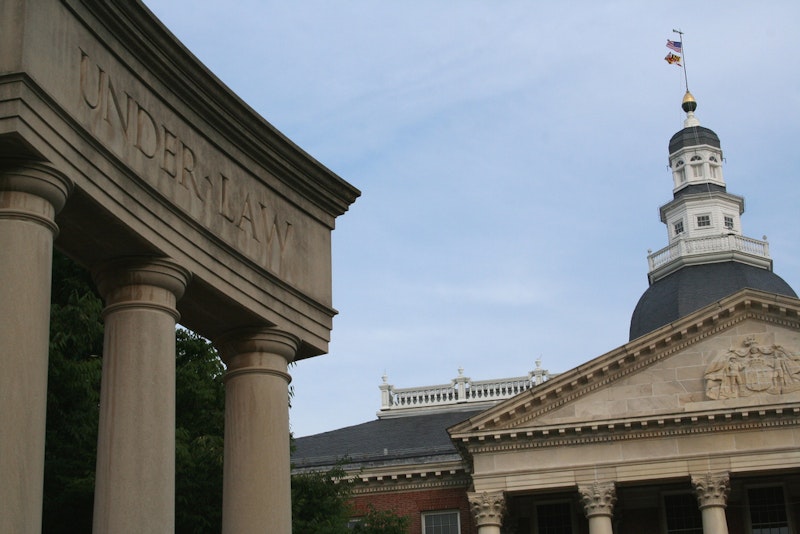 President Barak Obama and Maryland Gov. Martin O’Malley are more than fair-weather friends. They are partners in a political enterprise called the Democratic Party whose operating manual includes being seen together. They haven’t played hoops in the White House gym, at least to anyone’s knowledge, nor has Obama jammed with O’Malley’s rock band. But O’Malley was shrewd enough to shift his allegiance to Obama soon after Hillary Clinton surrendered her candidacy in 2008 and now it’s time for the payoff.

Obama and O’Malley have a mutual interest. It’s called survival, the primal scream of politics. O’Malley can no more afford to lose the governorship and the State House than the Democratic party endure the loss of the deep-blue state of Maryland. What’s at stake on November 2 is control of the state’s political apparatus for the 2012 presidential election as well as the re-jiggering of Maryland’s Congressional and legislative maps for the next 10 years.

The poker-hand politics for Maryland extends beyond Obama and O’Malley to include three of the Democratic Party’s top leaders who plant their flags and stake their claims in the state’s political culture: House Speaker Nancy (D’Alesandro) Pelosi; House Majority Leader Steny H. Hoyer; and House Democratic Campaign Committee Chairman Chris Van Hollen. For them, to lose Maryland would be to lose face (and their positions). As evidence, the House leadership is now beginning to invest heavily in the re-election campaign of Rep. Frank Kratovil, of the split-personality First District, a sure sign that they believe they can retain Kratovil’s contested seat.

O’Malley has stuck by Obama through the first two difficult years of his presidency and through a time when other Democrats were backing away from the president and in many cases even refusing to appear on the same stage with him. In turn, Obama has used Maryland as a backdrop for photo opportunities on many occasions and has frequently invited the willing O’Malley to appear at his side. Most recently, O’Malley had front-row seat at the White House for the jobs’ bill signing ceremony.

And to add to the symmetry between the two Democratic administrations, there has been a highly visible shuffling of O’Malley appointees into Obama’s ranks, most recently Sarah Bloom Raskin, Maryland’s financial regulator, to the Federal Reserve Board. And before that, Tom Perez from the Department of Licensing, Labor and Regulation to the Department of Justice, and John Porcari from Maryland’s Department of Transportation to Obama’s, to name a few of the others who have jumped across the District line to the adult side of government.

There’s a practical side to the alliance as well. The demographic composition of Maryland is not only hospitable to Democrats but it’s a perfect political amphitheater for Obama’s road show. The black population of Maryland is about 33 percent, with Prince George’s County at 72 percent and Baltimore City at 69 percent; Mitchellville, in PeeGee, is the wealthiest black enclave in America; Baltimore County has experienced the largest growth in black population of any non-black county in America; there are 450,000 labor union members in Maryland; and 26 percent of the workforce is employed by some level of government, local, state or federal. This is a population that rocks to Obama’s message of “change” and “moving forward” which also dovetails with O’Malley’s campaign theme of forward motion.

Suddenly, within the past week, the Obama White House has ratcheted up to full campaign fury in its efforts to activate the Democratic party’s base. The President is bracketing the country trying motivate students and to replicate his 2008 vote-pulling power among young voters. Locally, he’s recorded a campaign radio commercial for O’Malley and promised to personally campaign for him. Obama will be in Maryland with O’Malley this week at Bowie State University. Vice President Joe Biden has hosted a fundraiser for Sen. Barbara Mikulski, who has only token opposition, and former President Bill Clinton is committed to doing the same ceremonial chore. New York Mayor Michael Bloomberg is also adding his presence to campaign for O’Malley. And the Democratic Governors’ Association, of which O’Malley is vice chairman, is bankrolling a volley of television commercials on O’Malley’s behalf.

All the attention is not so much that Maryland has a lot to offer by way or size or electoral votes or that it’s a convenient campaign stop. But its location, joined at the hip with the nation’s capital as it is, is also a symbolic statement of attitudes toward the Obama Administration. But Maryland also feeds headlines that serve the national news in the sense, for example, that The Washington Post is not only a major national newspaper but also a local Maryland paper that shapes media coverage that ripples through other news outlets.

Voting is triage. A candidate knows what votes he has, what votes he doesn’t have and what voters can be persuaded. And it’s usually the persuadables who are the targets of a campaign. O’Malley’s inside strategy, in tandem with the Democratic party, is said to be based on “flushing” out early voters rather than the traditional method of stocking the polls with workers on election day. With little or no energy or foreknowledge, early voting was, for the most part, numerically unsuccessful in the primary election with only about 75,000 voters statewide casting early ballots.

The most recent Washington Post poll showed O’Malley up by 11 points, 52-41 percent, over Republican Robert L. Ehrlich Jr., perhaps an overly rosy forecast and a questionable jump over earlier polls that had them stuck at dead even. The two critical measurements that polls cannot detect are the most important ingredients in every election—organization and voter turnout.
But with a major push and a new force of habit, the reasoning goes, flushing out early voters will facilitate election day targeting, knowing by then who has and hasn’t voted. Much of the targeting in Baltimore, for example, will focus on voters who participated four years ago but who didn’t vote in this year’s primary. The get-out-the-vote component of O’Malley’s campaign is the domain of his bother, Peter, who delivered the bodies in 2006 and most recently was chief of staff to Baltimore County Executive Jim Smith. That line on his resume should give the younger O’Malley cachet in the all-important battleground of Baltimore County.
The question, too, is whether Obama’s presence in the Maryland campaign can motivate Democrats and help to burnish the turn-out numbers on election day. For whatever Obama does for O’Malley this year will be returned a thousand-fold in 2012.