You Can Live at Home

Taking love for granted in Guillaume Morissette’s The Original Face. 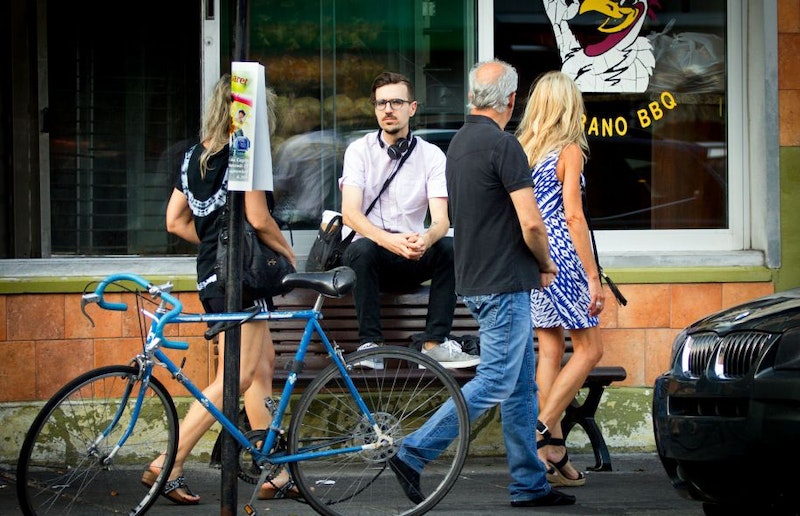 There’s no direction home in the gig economy. Weighed down by debt, dispirited by passions that go unpaid, and crushed by a vast nihilism imbued to everyone with a useless Bachelor’s degree. The world’s ending every day, new topics of doom presented on a platter each week with thinly veiled glee by those on TV. The last 10 days have been an extended “sexual assault week,” before that was “gun control week,” and before that was “Puerto Rico week,” and just weeks before, “Florida week” and “Houston week.” Hurricane summers, grim realities spelled out by fatalistic Atlantic articles that suggest we should just give up now.

More than economic anxiety or financial burden, for many Millennials, the idea of having kids still seems cruel and utterly alien. Not because of any “extended adolescence” or lack of interest—I know plenty of people who could afford to have children but choose not to because the future looks too bleak, a world uninhabitable by the end of the century. Radiation eyes and “metal fingers clutching dirty sheets.” As an artist unwilling to commit to a life-consuming office job, how does one come to terms with the quickly vanishing opportunities for fast cash and temp work as more and more of our world becomes automated?

Guillaume Morissette's The Original Face, a new novel from Véhicule Press, explores all of this through the eyes of Daniel Kerry, a po-faced video artist from Montreal battling minor depression and searching for some purpose in a world that feels blank, meaningless, and overbearing. Like so many artists I know, Daniel doubts the value of his own work, reverting to the lazy and irritating fatalism of “this is all meaningless anyway.” Morissette writes about the temporary ecstasy of posting some nice content into the ever moving streams of social media: “I watched my post about the video accumulate Likes on Facebook. ‘112 Likes,’ I thought, reading the number in my head. ‘I am 112 Likes,’ I thought.”

And then it’s gone, swept away “into the endless scroll that was now everyday life.” Daniel’s frugal to a fault, picky about his shitty jobs, and uninterested in anything but “being productive,” which brings him the same amount of satisfaction as making a few extra bucks or quitting a crap job (having an office job “feels like the opposite of being alive”). He’s completely uninterested in the minutiae of daily life, primarily eating. His girlfriend Grace accommodates Daniel’s defeatism, calming him and trying her best to bring him into a world of domestic stability and simplicity, even as she struggles to complete a Physics course. One of their final arguments sums up their respective attitudes toward life: he says, “going out for food just feels like a waste of money to me.” She responds: “Well, sorry for wanting to enjoy my fucking life, Daniel.”

The only sign of real life in The Original Face is Grace, someone who isn’t “up her own ass” obsessed with being perceived as a cutting edge artist, or caring what other people think of her and her lifestyle. She admonishes Daniel’s apathy towards his own work: “When you promote yourself on Facebook, you always post this half-serious bullshit, like, ‘Here’s this thing that I made for DIS Magazine, you can look at it if you want, whatever, I don’t care.’ You’re so afraid of people thinking you take yourself seriously, even though you do. Why can’t you be honest instead?”

He “doesn’t have an answer to that.” It’s pathetic, she’s right. Grace is there for Daniel’s sorry ass throughout The Original Face, and while I was surprised the book ended on such an abrupt and sour note, the guy deserved it. It’s hard to pitch Morissette’s tone in this book, whether he’s writing this as a cautionary tale, or as simply another alt-lit also-ran that can’t seem to summon up passion or enthusiasm for anything, and can’t shake a pathological fear of appearing vulnerable. I’m wary of “young aimless artists do drugs in the city” books, especially after Tao Lin had the last word on that pose with Taipei in 2013. But I enjoyed The Original Face, because all the art world and Vice nonsense is a sideshow to the central love story between Daniel and Grace, the latter a character who never would’ve appeared in any of the alt-lit books as the genre was peaking earlier in the decade.

Unassuming, generous, authentic, and comfortable with being normal: there’s an important lesson here, and by ending the book so suddenly and so sadly for Daniel, Morissette underlines his point that happiness is a full heart and an open mind. Daniel has a beautiful blessing in Grace and a wonderful future staring him in the face the whole book, but he remains unsure and aimless, and still stubborn, we leave his life with this sentence: “My own future laughed at me.” Count your lucky stars while you still have them.