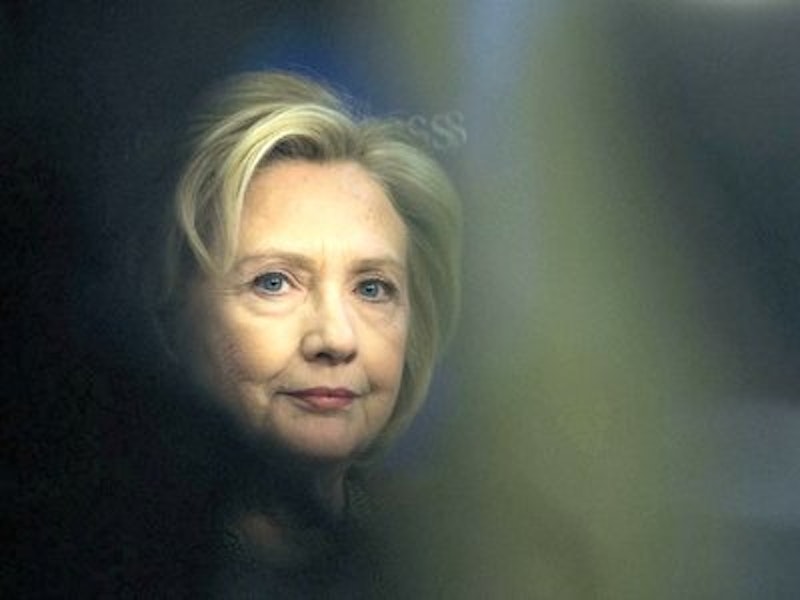 Like plenty of other people, I thought Clinton would probably win, judging by the confidence of all the relevant analysts. I wrote a column on this site saying so a year ago, shortly before she memorably failed to do so. Like millions of other psychologically healthy people, though, I was laughing rather than weeping by the wee early hours of Wednesday, November 9, if not with joy at the troubling prospect of an erratic Trump presidency, at least with surprise that the unbeatable had been beaten, and deservedly so.

But there were people in the bar that night—in Manhattan, not too far from the Javits Center where Clinton was supposed to have her victory party—who looked about ready to cry. I can’t imagine what would possess Lessig, himself a Democrat, to protract those people’s pain with ludicrous false hope at this late stage. Why protract his own for that matter? Why degrade himself in this futile fashion? Unless perhaps it’s a sadistic troll. He was for a short time a Clinton rival in the 2016 Democratic primary, after all.

But let us assume he’s serious (and in pain). The short version of his imagined scenario for belated Clinton triumph is that Russia-related impeachment might lead to the ouster of both Trump and Pence, constitutionally making Speaker of the House Paul Ryan the president—but in Lessig’s fantasy inspiring Ryan to make Clinton his vice president out of sheer guilt. Republicans are evil Russia-colluders and they know it, at least in Lessig’s fantasy, and so Ryan reaches across the aisle to heal wounds and balance the scales of justice. What a guy.

I think many people would vomit whether this scenario occurred in real life or on West Wing, but it’s a reminder that there’s still one season of Veep left in which Clinton could cameo. That might be a nice, harmless epilogue for everyone. Who from any faction wouldn’t enjoy seeing Julia Louis-Dreyfus tell Clinton, “I was the first female president, you know”?

It’d also be fun to see Julia and Larry David fighting each other in a bitter fictional Democratic primary on that show. And now I suppose I’m writing fan fiction again—but then, so is Lessig. Him doing so embarrasses me in much the same way that those all too frequent columns do in which prominent pundits imagine what their favorite candidates should have said in their most recent bungled campaign or inauguration speeches. Don’t help them, pundits! Don’t help them!

I suppose Lessig’s fantasizing is a natural extension of his usual intellectual activities. Recall that one of his campaign vows was the reinvention of American democracy (and expansion of voter participation, as if that’s desirable) through greater use of online voting. Whatever. Psychology professor Diana Fleischman reacted to the Lessig imaginary Clinton scenario on Twitter by joking that next Lessig should do one where Snoop Dogg becomes president. Anything is possible in the land of the imagination!

Why not spin out a scenario in which, say, Clinton becomes Empress of the World for Life after civilization is laid low by the volcanic eruption of the Yellowstone Caldera? Hey, it could happen. If you deny it, you’re practically endorsing Trump. Politics is about envisioning the change we can become or something.

The bit of fan fic rattling around my own brain lately, which maybe Lessig would enjoy co-writing with me, is a script for a hypothetical next film in the Alien franchise. See, Ridley Scott can do another three films worth of mediocre box office about meandering revelations concerning the Engineers who created the Aliens—or 20th Century Fox could make a billion dollars and please all their fans by having the Michael Fassbender robot come back to Earth with a ship full of his xenomorph army in the 25th century and fight an aged Sigourney Weaver. Or the Alien producers and Ridley Scott can continue to live in denial about what the fans want. Sometimes it is the establishment that is in denial and not the fan fic writer, after all.

I think we can agree Lessig is delusional. I suppose, then, the question is whether he’s more like a delusional fan fic writer or like a delusional Hollywood establishment that won’t accept the true desires of fans. Is he like a lonely fan on a message board (of pure cyber-democracy) or more like, well, Clinton herself, which is to say, a deranged ousted cult leader?

Denial comes naturally to the adherents of a religious faith, after all. And despite the frequent mockery of the religious right and Trump supporters who sound as impassioned and eager to fight as fascist rally-goers, weren’t the Clintonites, too, a kind of cult? Think of all those weeping faces on election night, the screams of cosmic destiny denied, the laughable about-face from worrying about whether Trump would accept his defeat gracefully to fumbling for explanations about What Happened and how this could possibly be occurring.

Ultimately, the Clintonites’ faith may be more akin to true blind religiosity than is the enthusiasm of the Trumpers. The Trump crowd—for all the damage they may yet do to international trade and norms of civility—has a sense of humor. This presidential run was all sort of a lark for them (one encouraged at times by Clinton herself, since she thought he’d be easy to beat), even if Trump is a lark that might destroy the world. By contrast, you can tell by the dour humorlessness of the Clintonites, especially in defeat, that they never considered any of this a laughing matter. It’s faith.

Lessig is supposed to be a bit more rational, analytical, cool-headed, and moderate than that. He should knock it off now, even if Clinton hasn’t quite gone away yet.

— Todd Seavey is the author of Libertarianism for Beginners and is on Twitter at @ToddSeavey.