It was a loss of innocence that summed up those early days of rock ‘n’ roll. 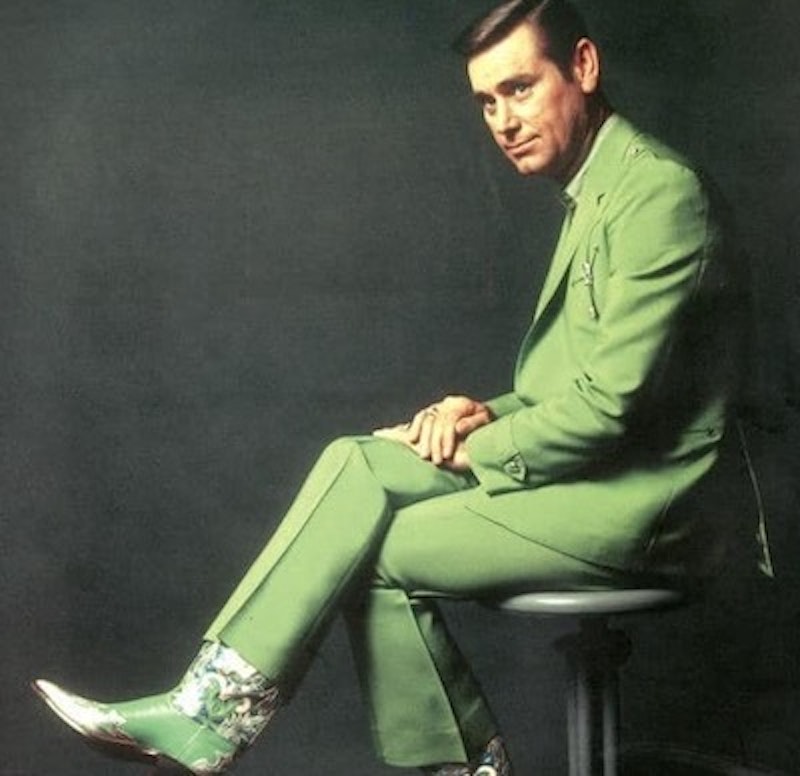 I first heard George Jones’ songs as a kid, playing on the rotation set lists of local AM radio stations. Songs like "Love Bug" and "The Race Is On." They were almost in the novelty song genre. Ironic songs in the lost and found of love. Amusing tunes with a good backbeat. Also on 45's and albums spun in friends’ club basements bars and at family occasions and parties. The single "Rock It" was released in 1956—the year I was born—under the name Thumper Jones with a songwriter credit to Geo. Jones on the Starday record label. Jones was not comfortable with the rockabilly sound that was so prominent in the 1950s.

At two minutes and 15 seconds, this classic rockabilly recording is a rare glimpse of Jones and his lifelong battle rejecting the norm of what was fashionable along with old age and rocking chairs. At least indirectly, for me he always went against the grain. He hated the rockabilly stylings of that early song so much that later on, after he’d "made it," he tried to purchase all the studio master copies to keep them off the air and out of the public domain. It was futile and a waste of money because the single can still be heard today on YouTube. It sounds stiff and forced like he was going through the motions under false pretense.

(Thumper) Jones’ “Rock It” is a direct musical rip off of Elvis Presley's “That's Alright Mama,” which was recorded two years earlier at Sun Studios in 1954. Elvis’ cover is a blatant rip-off of bluesman Arthur "Big Boy" Crudup's 1946 original version. All through the 1950s, stylized rock ‘n’ roll was recorded fast, catering to young white teens. The vast majority of it was stolen from the old black blues musicians of the day. Satisfying a growing demand for youth-oriented dance songs that filled jukeboxes and emanated from radio station towers to transistor radios and into young impressionable ears listening across the country.

"White Lightning" was George Jones’ first Number one C & W hit and no. 73 on Billboard’s Hot 100 charts in 1959. I find it amusing that a song about moonshine and alternative family values was such a big smash. It was written by J. P. Richardson, best known by his stage name, The Big Bopper. Like Bill Haley & the Comets, the Big Bopper was the king of the sock hop dance parties. J. P. Richardson’s connection to country music extends beyond his relationship with Jones. It was the Big Bopper who, suffering from the flu, asked Waylon Jennings, at that time bass player in Buddy Holly’s group, The Crickets, to let him have his seat on the ill-fated plane ride from Iowa to a tour stop in Minnesota.

It was a loss of innocence that summed up those early days of rock ‘n’ roll. Its indirect connections with country music shaped the sounds of each in many subtle ways. Tommy Allsup, guitarist for Buddy Holly, lost a coin flip with Ritchie Valens over who’d get a seat on the plane that nosedived into history, crashing in Clear Lake, Iowa, which killed Valens, Holly and “The Big Bopper.” Waylon Jennings went on to become a giant in the country music world and recorded “White Lightning” in 1970.

George Jones was a 22-year-old kid when he began his career. He emulated his heroes, Hank Williams, Roy Acuff and Lefty Frizzell. At age 11 he busked his way through downtown Beaumont Texas. With his Gene Autry guitar (a gift from his father) Jones earned free rides on the local transit bus by singing a song for the bus driver. George’s father, on the other hand, was a mean drunk who’d beat the boy if he didn’t sing his favorite songs the way he wanted to hear them. George Jones’ life was a parade of bar brawls, fistfights, wild parties, one-night stands, tsunamis of booze, mountains of cocaine, a plethora of pills, accompanied by hangovers, police reports, medical problems, divorce settlements, lawsuits, bankruptcy and foreclosure notices and infamous videos of run-ins with the law.

The roller coaster soap opera that was his life was one of excess. He pissed money away on houses, clothes, cars, bars, guitars, wives, even a theme park but lost it all as quick as he wrote the checks. Like a take from the title of his biography, he lived to tell it all. He beat the odds surviving by dumb luck and the mercy of the gods. I saw Jones in 2011, a few years before his death. He was headlining a food and wine festival in Port Deposit Maryland. He said he was suffering from a nasal infection and apologized to the audience that he wasn’t up to snuff. They were giving away white rocking chairs autographed and dated in silver permanent marker. After he died, a George Jones Museum opened in Nashville. There was a bar and they were selling George Jones moonshine; of course I bought a gallon. Like his song he didn’t need no rocking chair, Geritol or Medicare. His lifelong friend Waylon Jennings may have said it best: "If we could all sound like we wanted to, we'd all sound like George Jones."