RQ works through crisis and criticizes the only two people who care about him. 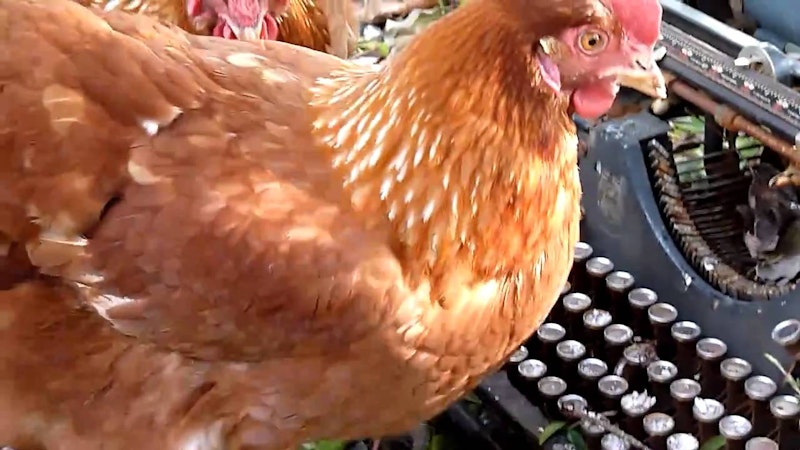 Pictured: An unknown relative of the author

“Here. You have to put the comma here.” I was losing my patience. Bennington had been at it for six hours, and he still didn’t know how to take dictation. He’s a surprisingly fast learner, and when he actually wants to do something, usually he can do it pretty quickly. Typing came easy to him: all I had to do was flash a couple Hunnies (aka Bennies but he doesn’t like that word) in his face while blaring KMFDM songs with activation messages I had recorded myself. I couldn’t exactly get him to say he was from Manchuria but he’s pretty “usable,” so to speak. Whenever Monica and I need to go to the grocery store, we don’t—we just send Bennington. He’s much easier to handle when he’s on his medication. We just hope the supply chains aren’t interrupted, otherwise we might have to trade him in for a new cousin.

“Does it go here?” No, Bennington. Sometimes I think he makes mistakes and sticks to them simply to irritate me. I don’t know why he’s drawn to that form of expression—perhaps it’s his aborted attempt at love. No doubt the world would never give him the benefit of the doubt, and thus my cousin Bennington is known world over as a lecher and a tyrant, despite being frail and practically schizophrenic. But I suppose mental health is all a matter of opinion. Monica got out of her television rut and has banished all reality programming from her mind. Now she only reads novels, which is good and bad. The good part is that we get to discuss literature late into the night—Goethe, Dos Passos, Barth, Mann, Wharton—and the bad part is that Monica has taken it upon herself to become an armchair book critic.

“This page doesn’t have a single functional predicate in it.” Now she’s reading my proofs. Really, Monica? Do you even know what a predicate is? “No—do you?” I didn’t answer her. I put my head down and kept typing. You keep the train moving for long enough you’re bound to get somewhere. You just have to keep going. “You’re calling it Elective Affinities? Roo, honey, I think that’s taken.” No one knows who Goethe is anymore. “Says who?” Look, a couple of years ago I snuck into a Harvard lecture hall where they were going over the Western canon. I know what the kids are all about—food: bananas, roses, corncobs, donuts, tea, cake, Cheetos. It’d be wiser to write a novel from the perspective of a Dorito than an undocumented worker. That would sell. Immigrants are old hat.

And I want them to have new hats, all of them. Because I’m a populist, and believe in the power of the people. Just don’t expect me to get anywhere near the frontlines. I’ll give money, I’ll post on my various platforms, I may even make a few phone calls (doubtful). But I draw the line at personal appearances and, even worse, canvassing (BARFF!). I don’t want to talk to people because most people are ugly and their homes are dens of inequity and crime, and it’s not because of the quarantine. It is because we live in a country run by machines hostile to human life. This is the thesis of my book and all of my subsequent writing for the foreseeable future. Keep up, don’t get lost: this is a Tea Moment, and it’s also End of Issue. When you combine a T.M. with an EOI—that’s so beautiful, that’s Earth, that’s God’s plan.

I suppose I’ll send off my new manuscript at the end of the summer, and maybe sign a few of these remaindered copies of Always a Stone for the upcoming Splice Today gift shop. Nicky will be selling his empty Ginger Ale cans and Russ will be selling commas he has no use for. On the other hand, I’ll have something real to sell: a book, a book filled with words that make up literature. Not merely a story, but literature. I’m a rooster and I wrote a novel—in ENGLISH! Why am I not on the cover of every magazine in the world? These things make you think, but not for very long. There is always more work to be done.