Lessons from D.C. and Bangkok. 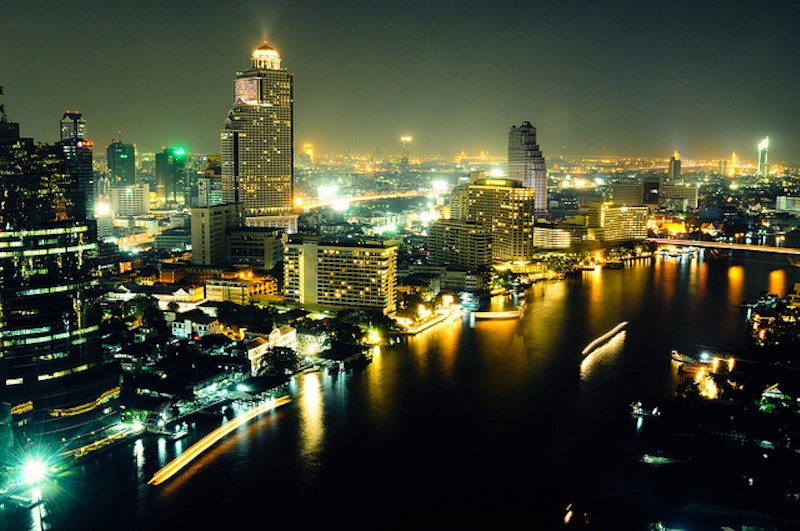 My brother-in-law has the state of Minnesota tattooed on his bicep. You might ask, Minnesota? Really? But more importantly: what is it about Minnesota that made him want to look at the contours of its state lines on his arm for the rest of his life? Place matters to us. According to Richard Florida, author of Who’s Your City, it should. He argues that where you live is the most important decision you’ll make in your life, on par with (or perhaps even surpassing) who you pick for a mate.

There are many parallels between picking a mate and a city. Falling in love with a city is like falling in love with a person: it is electric, jolting you to life. Suddenly, you see your own vibrancy reflected in the city/person. You are buoyed by the sensation of total belonging. You are exactly where you want to be, a feeling otherwise so elusive. My interest in cities is motivated by the fact that I am on the prowl for a new one. I don’t want to settle for just any old city. As my husband and I prepare to head off to grad school, I’m thinking more specifically about the qualities I am seeking.

Woman seeks city with access to places to jog, bike lanes, good public transportation, some greenery. Skyline must not be dominated by skyscrapers. Must not be overshadowed by surrounding suburbs. Quaintness a major plus. Must be cosmopolitan enough that Joan Didion could conceivably come to speak there.

By this measure, I should love D.C., where I was born and raised. But to me, D.C. is like that ostensibly attractive guy you date when you feel lonely, but whom you have no chemistry with and find pretty boring. Recently, I went to Bangkok, a city that I should despise based on the above catalogue, and just can’t seem to leave. The song “One Night in Bangkok” from the 1985 musical Chess sums the city up nicely: “One night in Bangkok makes the hard man humble. Not much between despair and ecstasy.” Well, that sounds kind of scary. Yet my one night in Bangkok quickly turned into 40.

Standing on the balcony of my friend’s 23rd story apartment, it hits me unexpectedly: I love Bangkok. And yet so many of the individual pieces that comprise Bangkok sound terrible—even morally suspect. Bangkok is home to an astounding 180 shopping malls. The traffic is appalling. It’s not quaint. Its horizon is pocked with skyscrapers; each 40-story building a phallic monument to the fact that Bangkok is thriving while many of its Southeast Asian neighbors languish.

So what’s appealing about Bangkok? In my experience, people are generally nice here. The traffic is terrible, but people don’t really honk. Almost every time I interact with someone, they look in my eyes and smile. But what makes Bangkok electric for me is its capacity for authenticity. It’s a city that’s comfortable with its inconsistencies, making no apparent attempt to reconcile otherwise irreconcilable things. It’s defined by its conservative Buddhist culture, yet when I walk down the street with my husband, prostitutes call out, “Hello, handsome man!” In the same city where I feel like a floozy for wearing shorts, I can buy a dildo on the street in plain sight of impressionable children. It is also a city where you are likely to see a legless blind woman begging for money below an enormous Christian Dior ad. You will see numerous people giving her money. Bangkok is a place that is simultaneously thriving and failing.

These incongruities are unintentional, likely the result of bureaucracy or, more darkly, the outright indifference of the city’s institutions. Bangkok, like all cities, doesn’t care about any one individual, but the difference is that Bangkok is not going to pretend to. If I’m a Bangkok bus driver, I’m going to speed up instead of slow down when I see people crossing the street. Just at a time when my twentysomething self-absorption is in full bloom, Bangkok is reminding me how little I matter.

Without trying, Bangkok is keeping me honest at a point in my life when I need it the most—the point when I am deciding how I am going to live. Suddenly, all my worry about my future is irrelevant. Maybe that is what a great city does, it forces us to forget ourselves and instead become apart of the pulse of a place. This is how we become New Yorkers, Michiganders, or wake up to find the likeness of a state on our bicep.

In contrast, I worry that if I were to live in D.C. for too long, my ego might flourish; I might start wearing Anne Taylor Loft pantsuits and live and die by my business card. I might get cozy; or worse, complacent.

Perhaps there are no Great Cities. Just great ones for specific people. Perhaps this is why large cities are so often the recipients of adoration: they offer different things to different people, with the capacity to respond to their inhabitants’ needs as they evolve over time. And as it turns out, that perfect city, according to my personal ad, doesn’t exist.