At a certain point, there is just too much else to read. 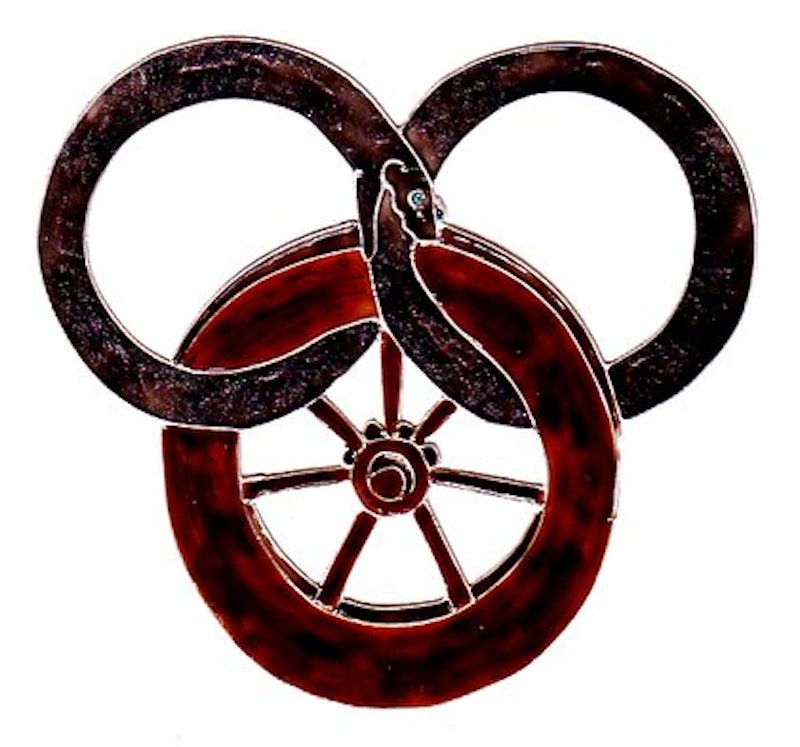 I had a funny feeling about the end of the Wheel of Time series. After 20-odd years and a baker's dozen of books, Robert Jordan's sword-and-sorcery series ended two weeks ago with the publication of A Memory of Light. Noteworthy in its own right, the series’ end is remarkable in that its creator pre-deceased it by six years. As anyone who follows this knows, the last three books were finished by Jordan’s chosen heir, Brandon Sanderson.

But I didn’t make it that far. Like many commenters on the reviews I’ve read, I had given up on the series more than a decade ago, less than halfway through. It starts promisingly, if familiarly: in The Eye of the World, the rustic lives of three young men are interrupted by a supernatural raid on their village. When they discover they were the raid’s targets, they decide to leave town quietly. A few of their lady friends are not far behind. Accompanied by Moiraine, an Aes Sedai—an order of sorceresses who are able to do magic by channeling the One Power—their adventures lead them to the titular Eye of the World, a legendary reservoir of psychic power imperiled by the waxing influence of the Dark One. There, they confront some of the Dark One’s cronies, the Forsaken. When Rand al’Thor, the natural leader among the three young men, accidentally channels the One Power to kill one of the Forsaken—the first man to do so in living memory—Moiraine ominously prophesies, “The Dragon is Reborn.” He is, it turns out, the reincarnation of a messianic hero from the Age of Legends, fated to confront the Dark One at the Last Battle and die in the process.

The ensuing 13 books show Rand and his friends gaining power and followers, arraying themselves like chess pieces against the final confrontation. Robert Jordan builds a vividly multi-cultural world, rendered with uninhibited enthusiasm for detail. But for me, frustration set in along the way. These books, vivid and picaresque as they are, are repetitive. And very, very long. At a certain point, there was just too much else to read.

So, after avidly reading several reviews of the last book I set out for Wikipedia to spoil the rest. I just wanted a bird’s eye view of the Last Battle, foretold lo these thousands of pages ago. I was surfeited on an extensive plot summary, which revealed none of the haste its author(s) must have felt to get through a 900-page book in less than a week. I had gotten what I wanted, but I felt a pang as I clicked out of that equivocal tab. After all that spilt blood and ink, I'll be damned if it didn't seem like a satisfying ending. I call it a funny feeling because it contained my whole bundled relationship with these books, tugging me into memories I hadn't recalled in ages.

It was sometime around sixth grade, and we were helping a cousin move into his college dorm room. I stole a few moments looking over his bookshelf, which was packed with brick-sized fantasy novels. Gerard Manley Hopkins wrote that “the mind, mind has mountains,” and I’ve always thought a good title contains mountains, too. A title like The Eye of the World or, better, The Dragon Reborn has an incantatory power on the imagination, pointing toward something beyond oneself, one's prosaic world. Something exciting. This is fundamental to the appeal of fantasy: a point on an imaginary map, the name of a made-up city, has a mysterious summoning power.

Sometime after that, at a family gathering, I saw another cousin talking to an aunt with his finger marking his place in A Crown of Swords. Later, when he had put it down, I furtively glanced at the cover. Another Wheel of Time book, the seventh. The next time we went to the bookstore, I had to have the first book one.

I haven't reread The Eye of the World in more than a decade, and I've probably spent more time in those years defending it in conversations with other apostate Wheel of Time readers than I spent reading its 600 pages. It's not a great fantasy novel but, as I've repeatedly maintained, it's a good one. Rand al'Thor—face number 962 out of the 1000 Joseph Campbell said a mythic hero can wear—and his friends are not always compelling characters in themselves. But what I enjoyed about them, and the cast of thousands they pick up along the way, is that they have an entertaining rapport. The men spend too much time agonizing about the women they're trying to bed, and the women spend too much time “crossing their arms beneath their breasts”—like his epic forebears Homer and the Beowulf poet, Robert Jordan was fond of using the same phrases over and over. But, as a 12-year-old boy, Rand, Mat, and Perrin's pining likely gave some outlet to my own inchoate feelings. Regardless, their adventures are a lot of fun, and I consumed the first two books in one flushed jag that winter. Other books passed by my nightstand over the next year, which let me slow things down. My most pleasurable memory of reading the Wheel of Time is curling up with the fourth book, The Shadow Rising, that next winter, when a spate of snow days allowed me to stretch out on the couch downstairs and give it my full-on attention. I have spent many whole days wrapped up in a book, but few still feel so torrid.

My relationship with the Wheel of Time began to change around then. In middle school, the Web began molding my identity the way books and television had my childhood. I started seeking out like-minded people in Yahoo! chat rooms and groups, searching for people who shared those interests my friends did not follow as intensely. The resources I found about the Wheel of Time still seem remarkable—huge, carefully curated sites full of information that was, in those pre-wiki and WordPress days, much more difficult to maintain.

It was through one of these fan sites that I got involved with text-based role-playing games, an ideal forum for a writerly kid in need of outlet as well as connection. Online text-based role-playing games, one of the oldest forms of imaginative online communication, usually took place on mundane-looking message boards, and were continuous, turned-based affairs. I don't remember if there was a word limit. But the level of detail the players put into their characters and posts astounded me. They, like Robert Jordan, reveled in the detail of world building, the clothes, the weapons, the cities and cultures he created. So did I. Just from reading the plot summary of A Memory of Light I remembered suddenly that my character was modeled after Mat Cauthon, the Dragon Reborn’s charming and dissolute friend. He was a gleeman—the equivalent of a wandering bard—whose weapon of choice was a quarterstaff, like Mat's. Although enthralled by the spectacle of these role-playing games, I was put off by how far along they felt; it was hard to try to jump into the middle of someone else's game.

Moreover, I hadn’t finished the seven books that were then published and, in those days when the Web wasn’t lousy with spoilers, I was afraid of having my reading ruined.

So, I set out on my own, starting my own role-playing game. Wonder of wonders, people joined up on my quest. I don’t remember what adventures we made for ourselves, nor most of the 10 or so characters with whom I went. I do remember one, though, whose character was an Ogier, a race of peaceful trolls who love knowledge and trees. Partly because of the kind of character he played, and partly because of how he played him, this character was an avuncular presence in our game. He, the far more experienced role player, took me under his wing, helping me run the corner of the Wheel of Time universe I'd claimed for us. His character's name is lost to me, but he is there, a warm flutter through my memory. A friend I never met.

I let the game slip after a few months, although I’m not sure why. In recent years I've been able to rediscover some of my back pages—ludicrous HTML 1.0 band pages, pained late teenage LiveJournals—but never the gleeman's adventures. I only remember one, set in the dead Lovecraftian city of Shadar Logoth, the most sinister location in The Eye of the World. As with the scene from the book, I recall that sense of dreadful numinousness that keeps me reading and writing weird fiction. Frustration with the books, too, had something to do with my abandonment. They do not have the grandeur of the Lord of the Rings, or the shameless bodily fluid-smearing joy of A Song of Ice and Fire. While reading the summary of the final book, I felt like I could pick up reasonably well on what was going on from my half-remembrances of the last book I finished, A Crown of Swords. This, to me, does not bode well for the length of the intervening six books.

But fans of imagined worlds are possessive, and for a while the world of the Wheel of Time was intensely my own in a way that Narnia and Middle Earth, or more recent favorites like Helliconia and Fillory, have not been. Fantasy and science fiction instill their fans with the urge to inhabit and create in a way other forms of fiction do not. The Web has lowered the barrier to admission and given many a platform; the rise of crowd sourcing and self-publishing has given this kind of creative endeavor more legitimacy. All at once on that Wikipedia page, I felt I was standing by the lamppost again, which lit a place I hadn’t visited in a long time.

And yet, I don’t feel the need to go back and finish reading the series. I think it’s enough just knowing that it was finished the way Robert Jordan intended it to be, and that the ending—even in précis—was satisfying. Zack Handlen concluded his review of A Memory of Light in the AV Club on an equivocal note: “Perhaps that’s the best tribute Sanderson could’ve composed: an ending that satisfies without ever letting readers forget what was lost.” He refers, of course, to Robert Jordan's untimely death. But another part of me was reminded of how much I have lost. John Hodgman has said nostalgia is the most dangerous emotion, and I’m inclined to agree. And yet, when I read about journey’s end for Rand al'Thor and his friends, there that feeling was, waiting to be explored.