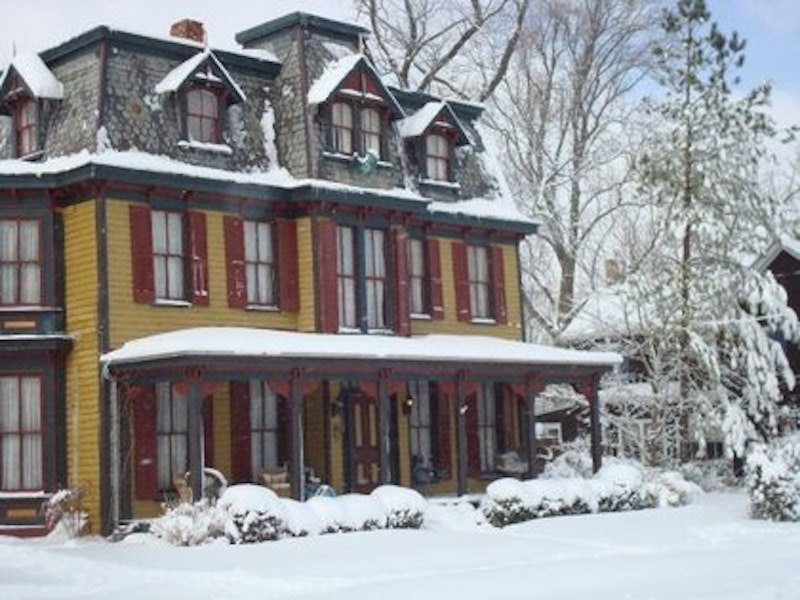 We bought this three-story 1881 Second Empire (read: Addams Family architecture) Victorian (pictured) back in 2001. I was hopped up on pregnancy hormones resulting from being Irish and (recovering) Catholic, and dreams of kids riding bikes to school. Seriously? They don’t even let kids rides bikes to school these days. How sad is that?

Anyway, the previous owner said to me during the tour “I just love the fact that you can see the school from the second story porch in the back, and we’re on the parade route.” SOLD. Suckerzzzzz! We bought it despite the fact that the furnace actually spewed flames from it when the inspector inspected. He also said the only thing holding up the first floor toilet was its pipe, and pretty much the only thing holding the house itself up were the termites holding hands.

But common sense be damned when a house had four porches, 10-foot ceilings, bay windows, three fireplaces, and a three level winding mahogany stairway complete with a George Bailey newel post that falls off if you grab it too hard on your way up the steps. It’s over 4000 square feet and we bought it for $180,000. We then spent more than that fixing it up; there was an eight-inch difference between one side of the kitchen and the other. Balls rolled fast on the funhouse floor where termites had eaten the entire sill.

I remember being nine months pregnant in August during the kitchen renovation and washing dishes in an outdoor moveable sink with a hose attached to it. Redneck nation, my friends.

Though as I type these words my fingers are so cold I can barely feel them (that furnace is still broken, and the pipes are currently frozen to one of the bathrooms), I will still admit that this house has its charms. Yes, a 10-foot Christmas tree looks lovely in a huge bay window. When the radiators were working, mittens lined up on them looked adorable. We put in an in-ground pool, and you can see it from the screened second story porch, so I have had some lovely spring and summer moments hiding from the kids there.

Though in our modern days of unfortunate parental paranoia, my kids are allowed by the school system neither to ride bikes nor walk (except high school) to school, they can and do ride their bikes to the library, pizza shop, coffee shop, waterfront trail and park, and the corner store when I’m out of something. We uncovered a brick fireplace in the kitchen when we renovated it. And I love my deep, huge original Victorian clawfoot tub.

But right now, when it’s 15 degrees outside, the house has absolutely no charm. All 44 original windows are drafty. Restoring original hardwood floors is great, except when you can feel icy air blowing up from the cellar. You can see your breath in the hallway. We heat the house with a pellet stove, a woodstove, and space heaters in the bedrooms because it costs $1000 a month in oil to run the radiators even when the furnace is working.

And it’s all my fault.

I’m the one who had the big “Victorian house” dream. I grew up in an apartment complex and my parents never owned a home, which meant I spent a childhood dreaming of four walls where neighbors weren’t attached to either side and there was a backyard. My husband has worked like an indentured servant (one of the original ones still haunts the house, actually) on this place for a decade and a half. He learned electric, plumbing, carpentry, masonry, roofing, you name it—all out of necessity for when we were out of money to pay pros to do the job, not to mention the kind of necessity that comes when it’s just raining inside your house. I’m thankful beyond words that he gave me the dream of this house, and I will forever be happy that our kids’ memories of growing up will be here.

It’s truly a monster house, and I have loved it well, but dreams change and as much as I have scoffed at people with vinyl siding in subdivisions, I sure am jealous that they have working thermostats right now.