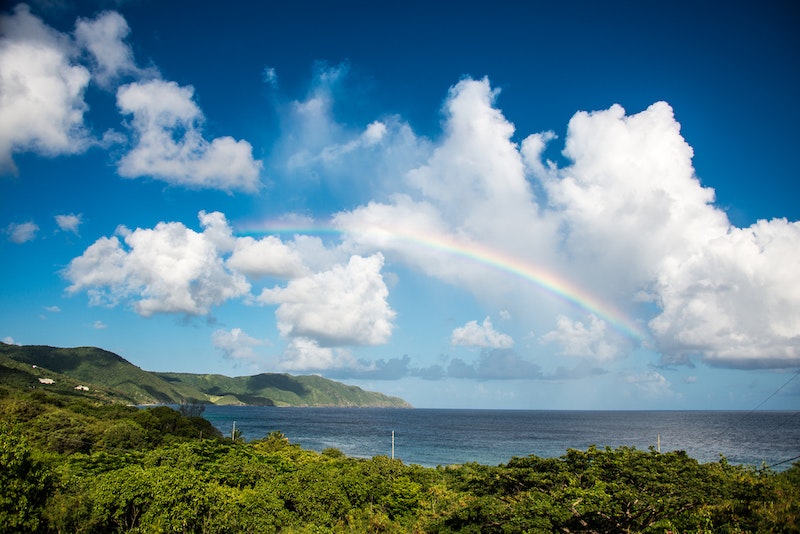 It was months ago when my boyfriend Callen’s family asked me to join them on a vacation to the Virgin Islands. I couldn’t help but ask, are you sure? To which they exclaimed, practically in unison, “Of course!” My mind flooded with worry, about logistics like work and money and whether or not I had enough bathing suits. I expressed these anxieties to Callen later, to which he pleaded that I relax. Since relaxation is, to me, a word that appears solely on advertisements for swanky spas and not in reality, I simply stifled my fear of the unknown.

Weeks passed and we began looking at potential locations for the vacation. Part of the trip’s purpose was for Callen to go scuba diving, so it was important that the underwater conditions were nice. He looked at Puerto Rico, where the diving was okay, and St. Thomas that seemed a bit touristy, and then started researching St. Croix. It wasn’t as developed as the other US Virgin islands, though much larger in size. Not long after, we were booked flights there.

We arrived at the very small Henry E. Rohlson airport on a Saturday. After flying over blue-green water spotted with huge reefs and lined with white beaches, I was excited to start exploring. Our rental car was a sedan, and though it had more than enough room in the trunk, it was comical fitting five adults in it. Soon we were off, Callen’s father doing his best to stay on the left side of the road.

After a few miles it was evident that the locals of St. Croix, though technically U.S. citizens, had a different culture. Most of the homes were simple, concrete, one-story buildings. Many were dilapidated. Approaching the condo we rented, the houses got nicer and we began to see signs for resorts. It was a dichotomy that left us all culture shocked. I recalled my trip to Curacao, when a local cab driver took us on a route that veered from the resorts and restaurants and we saw people living in wooden shacks. It was confusing to Cal that the U.S. could own the island and let its residents live in near-poverty.

Trying to shake those feelings, we went out to our balcony. The view was of the ocean, which was as gorgeous as I’d imagined. That particular beach was mostly covered with volcanic rocks, which were striking with the Caribbean water. After sunset we went out to dinner in Christiansted, one of the larger towns on the island. We had trouble navigating the narrow streets in the dark, and it was plain we made a mistake going out at night. Women spilling out of their barely visible clothes wandered around at stop signs, men with wide eyes quickly approached our car when we went slowly.

As the days went on, we acquainted ourselves with the beauty of St. Croix. Callen and I walked out to the beach in front of the condo and went snorkeling, where we saw dozens of colorful fish. We went to Cane Bay, which was a great drive along cliffs that went straight down to the ocean. Cane Bay was recommended as a snorkeling beach, but when Callen and I went out, the reefs looked damaged and unhealthy. There weren’t many fish; we’d seen more at our beach. While almost relaxing on the sand, we found the culprit of the destroyed reefs. A group of people on horses had gone barreling past us earlier, kicking up sand without a care. They returned, and a guide wearing a long-sleeved shirt, jeans and a cowboy hat led them into the water, and on to the reefs. We watched in amazement and disgust. Callen’s brother went up the guide when they returned; asking why they thought riding horses on a coral reef was a good idea. The man told him that the horses didn’t affect the ammonia levels in the water and shook his hand, not giving him a straight answer. Another group went out on the reef that day. It was disappointing that the company leading the horse tours let it happen, but perhaps more so that the people on the horses didn’t know any better.

Some of the best snorkeling we did, despite seeing a few incredibly scary barracuda, was on Buck Island. The island and its surrounding waters are a nature preserve, but were damaged by Hurricane Hugo in 1989. It’s only accessible by boat, and we took a catamaran, which was the first time I’d been on a sailboat recreationally. Cal and I took the steep, cactus-lined trail to the lookout almost at the top of the island.

With five days left, Callen said there was a developing hurricane that was on track to hit the Virgin Islands on the day we were supposed to leave. I laughed, mostly because there hadn’t been a hurricane in St. Croix in three years and they were currently experiencing a severe drought. No one else did. The hurricane would surely change course, I figured. We agreed to keep an eye on it and hope that our flights weren’t affected.

We went to Rainbow Beach in Frederiksted, which was the seaglass mecca. Callen and I went snorkeling with a mesh bag, and collected some of the best glass I’ve ever seen, including “lagoon” colored glass, which is only found in the Caribbean. Tamarind Reef beach was nice as well, and the snorkeling there was probably the best out of any beach we went to, though the visibility was bad that day. I woke up a sleeping loggerhead sea turtle, which gave me a weary look but didn’t seem to mind us swimming with him for a while.

The hurricane progressed to a category three on Friday, but went down to a tropical depression by the weekend. It was still en route to the Islands, so maintenance came to put hurricane shutters on our windows. I was hoped the storm would delay my flight so we could stay another day, but that would mean I’d miss my first day of class. Preemptively, I emailed my professor that I might get stuck on vacation. On Monday night the storm blew through, not much more than a bad thunderstorm. I slept through most of it.