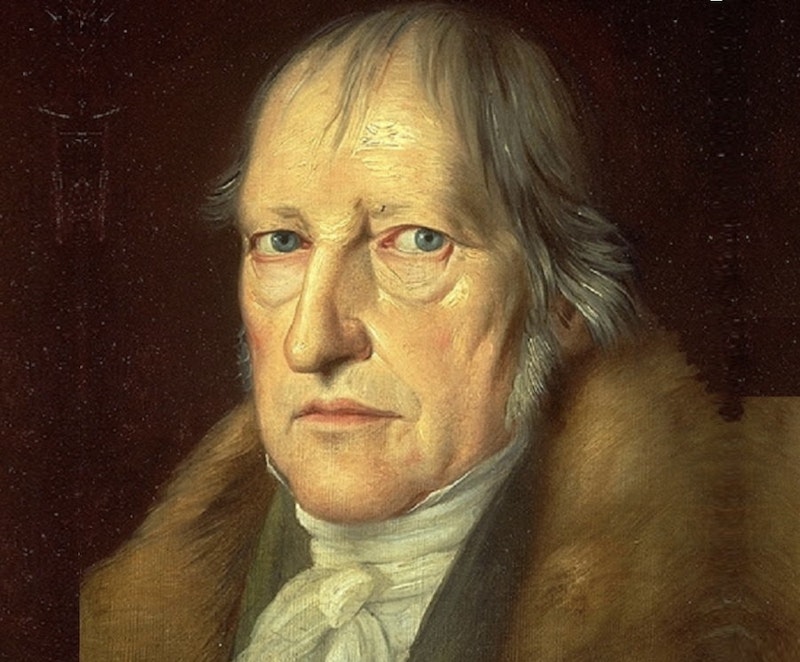 There are few more impressive thinkers than Hegel (1770-1831), and few less readable. Also, few more influential; Hegel lent intellectual ballast indifferently to reactionary nationalism (Hegel's own position, honestly) and Marxist communism. The intellectual underpinnings of both fascism and socialism can be traced to some extent to him, and battles between "right and left Hegelians" broke out early and have hardly abated. Perhaps right now we could make that Francis Fukuyama v. Slavoj Zizek.

Hegel helps almost everyone: he's profound, obscure, and impressive, so everyone who cares about ideas wants him on their side. And he tells human history—the whole thing; everyone everywhere; where humanity has gone and where it's headed—as a narrative, in a way that gives you the sense that, without troubling yourself too hard about the details, you have a comprehensive grasp of everything. Human history, for Hegel, makes sense or is meaningful in as straightforward a sense as anything can be: it's a story, a text, a treatise perhaps. Every single thing that happens—perhaps you stubbed your toe this morning, for example—happens because of what history demands.

What drives history, for Hegel (unlike his follower and would-be slayer Marx) isn't material events (climate change or the discovery of the Americas, super-conductors or monetary policy), but ideas. History for Hegel is (believe it or not) God coming to self-consciousness, a dialectical process conducted between abstractions such as "the primitive," "the religious," and "the romantic," as phases of the arts and of political systems. One phase emerges out of another because of the internal intellectual tensions within it, not (for example) because of arbitrary or unforeseeable physical events (a plague, say).

It does feel good, understanding all of history without getting lost in facts or coming into contact with them at all. And by the 1980s, we'd run out of Hegels and post-Hegels, and straight into philosophies (associated with "postmodernism") that rejected the whole idea of narrating history as a single coherent story. Cue Francis Fukuyama, the Hegel of the 1990s.

Like Hegel, he narrated all of human history in a few hundred pages. Like Hegel he sort of promised that history would end or had already ended in a way that would make sense and be good for roughly everybody. He read the Cold War as a Hegelian dialectic, and the "liberal world order" that he saw emerging out of the fall of the Berlin Wall as the satisfying culmination of the novel that constitutes human history.

You might’ve noticed that human history hasn't come to an end after all, which has no real tendency to throw the views of Hegel or Fukuyama into doubt because they’re very evasive about what exactly to expect at and after the End. But to the extent that he wants to explain all, FF will need to explain, for example, the rise of "right-wing populism" as the alleged antagonist of "the liberal world-order," and he’ll have to do it in terms of a dialectical encounter of ideas, as unlikely as that seems. That's evidently the project of his new book Liberalism and Its Discontents.

But Fukuyama is no Hegel. First, he's very derivative of Hegel, even at this extremely late date. The philosophy hasn’t really been mastered; Fukuyama's Hegel, like his Nietzsche and Marx, are explained at the Wikipedia level, with some verbal concealment (try working out his distinction between thymotic and athymotic regimes, key to his book The End of History and the Last Man) or the role of "the desire for recognition" (a very Hegelian concept). Concrete events from the fall of the Roman Republic to the election of Boris Johnson figure for Fukuyama only as illustrations of history as the operation of general concepts.

Here's the narrative he puts forth in the new book, same as the other books. During the aptly-named "Enlightenment" people, especially European people, managed to find their way out of the religious ignorance of the Dark Ages. "These techniques are known collectively as the scientific method, and its rise was critical to liberalism's struggle against religion. Science was able to defeat it because it could produce repeatable results." That's the level of sophistication at which we're operating: middle-school history circa 1975.

Things were going well, and we were all basically agreed, until "post-modernism" came to throw Enlightenment science and its liberal politics into question around 1970. (How agreed were "we" all in 1730, 1830, or 1930, about science or liberal politics? Best not to look too closely.) This was understandable because science did produce some untoward consequences, such as Hiroshima, Fukuyama remarks. Michel Foucault was smart, but in his work "deconstruction evolved into postmodernism, a more general critique of the cognitive modes that had been associated with classical liberalism for centuries."

Foucault's alleged (very vaguely described) turn from deconstruction to postmodernism has led to the end of the end of history, because now we can agree on nothing at all, just the opposite of the happy consensus Fukuyama pretended we'd reached in 1989. "For many years now," he says in the new book, "societies have been living with moral relativism, which asserts the essential subjectivity of all value systems. Liberalism was founded on the premise that people disagree on the final ends of life or the understandings of the good. Postmodernism, however, has moved us further, from moral to cognitive relativism, in which every factual observation is regarded as subjective."

From Foucault (by way of Nietzsche) straight to Trump. Contemporary relativism, attributable straightforwardly to postmodern or "critical" theory, has led to two disasters: white identity or “replacement” politics on the right, and also the relentless emphasis on race and melt-down of gender on the left. Postmodern subjectivism about truth ended the beautiful end and now portends disaster. What we need is to return to classical liberalism and objectivity.

As a piece of intellectual history, it’s merely wishful, incompetently handled, hack-like in its primitive distinctions,simplistic in its analysis. Concrete events appear as one-paragraph cameos, illustrations of Fukuyama's just-so stories about Planet Narrative. Compared to intellectual historians of the previous generation—figures such as Isaiah Berlin or Hannah Arendt—Fukuyama doesn't reach a standard of basic competence; he doesn't even make a start on what would be necessary to make his sort of story plausible. The authorship is uninformed and merely tendentious.

It would take me a long unprofitable time to really show this. But just a few remarks on this particular segment. Notions such as "the Enlightenment" and "science" need, and have for a century received, much more subtle and truthful analyses from intellectual historians. The idea that science eliminated religion, as well as the relation of science, for example, to democracy, as to colonialism, and so on: these are immensely complicated terrains and Fukuyama's high-school-textbook level history conflating it all is unsustainable in the face of any responsible treatment of the phenomena.

Neither Nietzsche nor Foucault are straightforward relativists, and Fukuyama's readings of such figures is just as raw in its incompetence as his reading of the Enlightenment. If there’ssuch a thing as postmodern relativism (his great bugaboo and destroyer), it’s obviously not the same as "subjectivism." That Fukuyama identifies cultural relativism (the idea, for example, that truth emerges only within particular languages, cultures, conceptual schemes and can’t be evaluated independently of them) with total subjectivism (the idea that whatever I believe is true for me, or something) is a good indication of the level of philosophical sophistication at which he's operating.

At any rate, Fukuyama says that Nietzsche and Foucault argue that there's no truth, only raw power. This is a terrible misreading, an ideological caricature. Then he says, more or less, that this is the position of both Donald Trump and Alexandria Ocasio-Cortez and that it explains the precarioussituation we're in now, or why history still needs to twitch awhile before falling still.

You can't explain any concrete events by throwing around abstractions at this level of implausibility or with this sort of incompetence or by blaming a caricature of Michel Foucault. And if you are going to try, you'd better tell a more subtle and a more accurate story. "Francis Fukuyama," the name, is often used to add intellectual heft to a point or a line of... jive. It ought to have just the opposite effect, marking anything and anyone it touches as pseudo-intellectual.