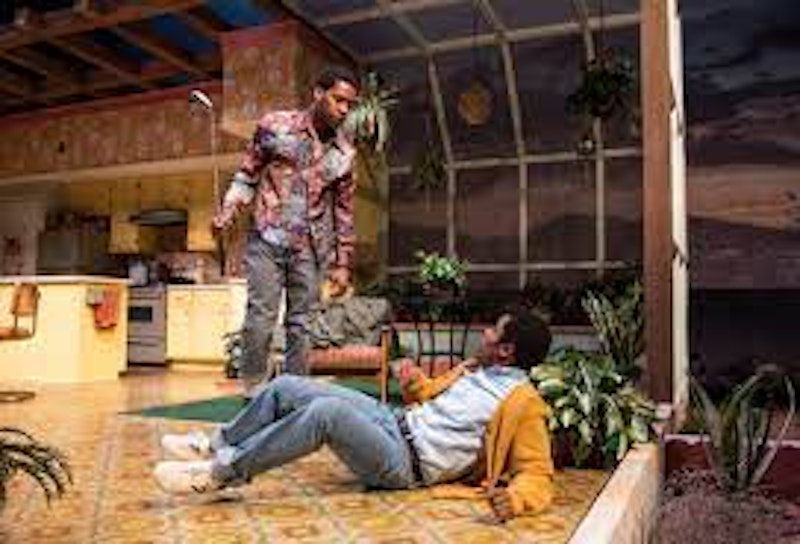 In the last week, I’ve traversed the better part of the western coast of Ireland, killing time between tourist attractions like the Rock of Cashel and the Cliffs of Mohr and the Tree of O’Halloran (might have made that last one up) hunched over British hotel breakfasts while muzak versions of popular hits are pumped through the restaurant speakers: “Bohemian Rhapsody,” “Smells Like Teen Spirit,” “Hard Day’s Night,” gelatinized by the twinkly ivory treatment and congealed into one homogenous, thoroughly anodyne custard of western culture.

This sort of kitsch lay at the heart of Sam Shepard’s True West, which premiered at Chicago’s Steppenwolf Theater in 1982 with Gary Sinise and John Malkovich playing the leads, was revived in 2019 with Jon Michael Hill and Namir Smallwood, and now returns once again for a brief run at the Town Hall Theatre for the Galway International Arts Festival. (Full disclosure: my sister Maura has worked and performed for Steppenwolf in the past.) Everything about the play, from the two-act structure to the leads to the indoor vs. outdoor stage and sound design, is bifurcated along the border between fake and real, sanitized and authentic, the America we strive for and the one we actually inhabit. Shepard’s disgust for the kitschification of America—epitomized by Lee and Austin’s mom’s prominently displayed Idaho plate—is palpable (“There is no such thing as the West anymore”), as is the lament for some “real America” that probably never existed.

The play concerns two brothers staying in their mom’s house while she’s on vacation: Austin (Hill), the respectable, Ivy League-educated writer, who’s asked to watch the house; and Lee (Smallwood), the criminal black sheep of the family who arrives unexpectedly after months living in the desert. The most notable aspect of the revival is the casting of black actors in the lead roles, giving us a new lens through which to examine the play. The references to “blondes,” both as objects of sexual desire and embodiments of broader domestic aspirations, take on new meanings when delivered by black actors; the same goes for a scene in which Austin warns Lee not to walk around their mother’s suburban neighborhood alone at night. More crucially, the casting of black actors lends the play heightened stakes, imbuing the passive-aggressive interactions between Lee and white movie producer Saul Kimmer (Randall Arney, who also directed) with a just-below-the-surface racial tension; once that tension is deflated after Saul buys Lee’s western movie outline, Austin’s left to question his identity (or lack thereof) and internalize their father’s abandonment and destitution. Austin’s loss, going from fatherless child to educated writer to wannabe desert wanderer, is made more profound by the expectations of his race.

Smallwood gets the juicier role with Lee, playing Lee’s scenes with Saul like a more menacing version of J.B. Smoove’s Leon on Curb Your Enthusiasm—minus the lisp—employing a distinctly black, highly self-aware garrulousness as a disarming alpha dog social tactic (Arney’s nervous acquiescence in each of these interactions is one of the play’s comedic highlights), while playing the scenes alone with Austin heavier and more aggressive. The significant size differential between the tall, muscular Smallwood and the short, lean Hill helps emphasize Austin’s vulnerability in his scenes with Lee, which have a way of turning violent on a dime.

Hill has the harder job with Austin, which demands playing the straight man to Lee’s oddball for most of the play, but also requires a sudden turn in the second act, when Austin decides he wants to abandon his family and live in the desert. Sinise sold this abrupt decision with a ruthless gaze (so underutilized as a vessel for pure nihilism in his post-Lt. Dan career). Hill has a much sweeter, more innocent face, and when he takes off his wedding ring and throws it to the floor, begging Lee to take him to the desert, it feels less like real human behavior and more like the sort of creative contrivance Austin might complain about.

I don’t fault Hill for this, whose performance is otherwise superb. In fact, Austin’s second act turn makes me question to what extent True West was designed from the outset as a send-up of the idea of the real or authentic, with Shepard intentionally pitting Theatre of Cruelty-inspired dramatic rawness against the formal limitations of a traditional two-act structure, culminating in the same sort of non-resolution as Lee’s western. This clash of approaches might constitute Shepard’s attempt to root out the art in the artificial, digging through the din of sterilized western monoculture for some hidden meaning the same way Lee digs through his mom’s Tupperware for a pencil, though Shepard also seemed fully aware that no secret truth lay over the horizon—that the digging is the truth.

The morning after the play, I reflect at my hotel breakfast table, watching cream swirl on the surface of my coffee. “Old Town Road”—another American masterpiece that stacks Western clichés to sublime heights—gets the sickly saccharine piano treatment, drained of all its idiosyncratic beauty and absorbed into the new monocultural canon, one more reminder that there’s no West. So we make do with what we’ve got, muzak and all. I leave the hotel and go buy some shamrock magnets.