If you're not from New York, and even if you are, you might not know there's a Corona Ave. 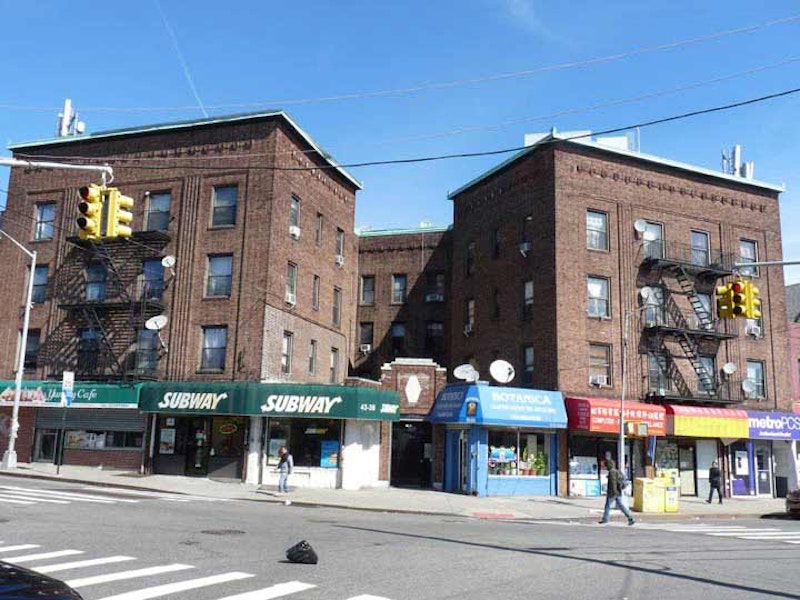 In the Covid Era, many non-New Yorkers would be surprised to know that NYC has a neighborhood as well as an avenue called Corona. I decided to undertake a walk of Corona Ave. itself, which I’d never done in one day. The road’s approximately three miles long, extending from the heart of Elmhurst to Flushing Meadows-Corona Park, and runs over land that has been settled by Europeans since the 1600s, at least in parts.

If you look at today’s map, Corona Ave. presents a surprising appearance—it doesn’t run in a straight line but rather runs northeast, southeast, northeast, and southeast again so that from the air, it looks like a wide, splayed-out letter “M.” I’m unsure about the reasons why Corona Ave. twists and turns like this but in general, the reason old roads do this is to evade swampy or hilly ground, and that may be the case with Corona Ave. 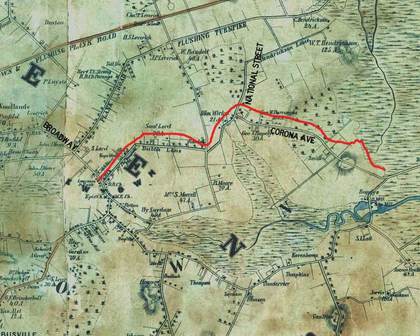 This is the oldest map I have of Queens that shows the roads, a Dripps map made in 1852. I’ve circled Corona Avenue’s 1852 path in red and added a couple of present-day street names. Corona Ave., then mostly unnamed, took exactly the same route it does today. While Manhattan and Brooklyn have erased most of their colonial-era routes, Queens has preserved much of its own, disguising them with newer names or even numbers. The west end of Corona Ave. is the oldest as it’s in the heart of Newtown, once a separate town founded by Dutch settlers in 1652 following their ouster from Maspeth by Native-Americans. Newtown evolved into today’s Elmhurst. Corona Ave., at its western end, was called Dutch Lane.

When the Queens Topographic Bureau changed most of Queens to numbered streets, it also standardized some names: for example, Jackson Ave., Broadway (Flushing) and North Hempstead Turnpike were combined into Northern Blvd. about 1920, and similarly, Corona Ave. took over as the name for the entire road. 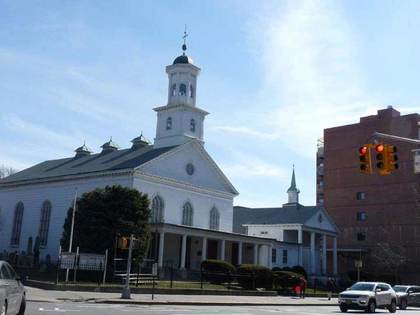 On Broadway between 51st and Corona Aves. is the Reformed Dutch Church of Newtown, built in 1831, enlarged in 1851 with stained glass added in 1874. It replaced an older structure built in 1733. On the Corona Ave. side is an ancient graveyard with some Dutch stones. Some are very old, going back to the first days of the congregation; the older stones are brownstone with uneven tops, and the lettering in most cases is much more readable than younger marble stones, which deteriorated faster. 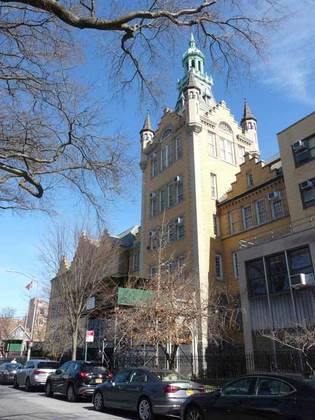 Newtown High School, which preserves the old town name, isn’t on Corona Ave. but is well in sight on 90th St. One of the most distinctive buildings in Queens is the 169-foot tall, five-spire-tower. It was designed in a Flemish Renaissance style by C.B. J. Snyder and completed in 1921—the prolific school architect’s perhaps greatest school building. Newtown High’s first graduating class in 1894 was one student; today over 4000 students attend. 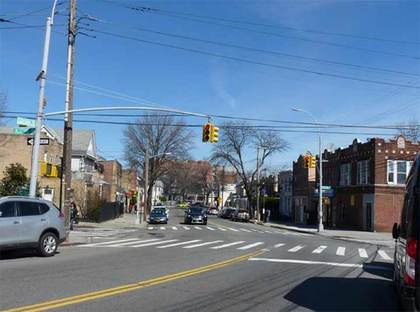 At Alstyne Ave., Corona Ave. makes yet another jog northeast and indeed, will make a couple more before finally turning southeast at National St., a direction it maintains, with a couple of more jogs, before ending at the Long Island (Horace Harding) Expressway. Alstyne is one of a number of grid-defying streets in Corona that have kept their names rather than being numbered. It’s an odd street that begins at 94th St. just off Corona, then crosses it here, and then parallels it after Corona’s southeast turn. Despite being on mostly flat ground (though the 1852 Dripps map implies hills that have since been decreased or leveled) different sections of Corona have a very odd street layout defined by Corona Ave.’s zigzagged nature. Southeast of here, a group of named streets wind around a central point within Flushing Meadows Park. These streets have names like Penrod, Granger, Waldron, and Queens’ only “X” street, Xenia. 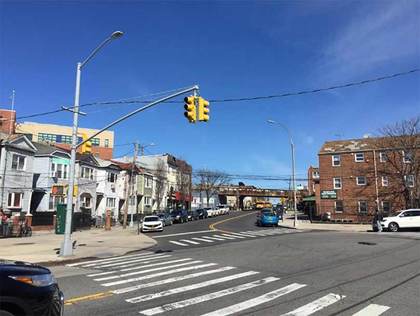 National St. issues north from Corona Ave. You can see the trestle of the Long Island Rail Road in the distance; Corona was a stop on the line until 1930. Periodically there are calls to revive the Corona and Elmhurst stations, which had been the only two stations on the Port Washington branch between Woodside and Citi Field (and most of the time, Flushing Main Street) but these calls come to nothing.

National St. is a main business street of southern Corona. It takes its name from the former National Racetrack, which was in Corona between 1854 and 1869 that also hosted the first baseball game in Queens to which an admission fee was charged. The LIRR runs through its former grounds today. National St. has also been called Grand Ave. and Louona Ave. in the past. The name “Louona” also crops up on a former firehouse on 32nd Ave. Perhaps Louona was the wife or a relative of Benjamin Hitchcock; otherwise, its origin stumps me. 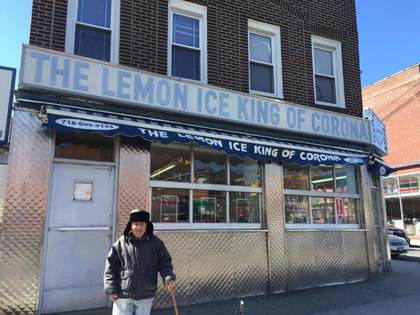 I used to bicycle all over Queens when I first moved to Flushing; in 1993, those were more carefree days (now I pretty much stick to the Joe Michaels bike path along Cross Island Parkway, the Douglaston peninsula, and Fort Totten.) When bicycling through Flushing Meadows-Corona Park to get to Queens’ western sections, I’d be pretty dry on the way home, and if I was nearby I’d always stop for a lemon ice here at Lemon Ice King. The Benfaremo family began their flavored ice empire at 108th and 52nd, where both meet Corona Ave., in 1944. Longstanding tradition means no napkins or spoons, you just squeeze the ice out of the paper cups into your mouth. 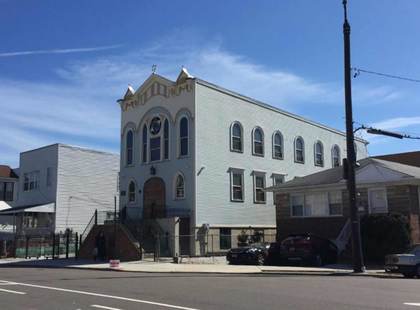 Tiefereth Israel, 54th Ave. just off Corona, is the lone remaining synagogue in Corona. The congregation constructed its synagogue building in 1911, a wooden Gothic and Moorish revival structure designed by Crescent L. Varrone, and modeled after the narrow tenement synagogues built on Manhattan‘s Lower East Side. “Tiferet” or “tiefereth” means glory or splendor in Hebrew.

The synagogue was repurchased by a company that included Bukharan Jews, who are concentrated in nearby Forest Hills, and it was restored in 2010. Cosmetics entrepreneur Estee Lauder worshiped here in the early-20th century. In a stable behind the house, her uncle, a chemist, mixed experimental face creams which Estée sold in Manhattan beauty salons. Estée managed to develop her one-woman cosmetics enterprise into a multi-billion dollar empire. When her career was just starting out Madonna used the synagogue as a rehearsal space in 1979-1980.

Corona Ave. ends its southeast progress at Flushing Meadows-Corona Park, and the immense New York State World’s Fair Pavilion, which has undergone various refurbishments are repairs since its 50-year anniversary in 2014, comes into view. I’ve always been fascinated by the park signage. The pavilion once featured a floor map of New York State.