Basically, this is just how I do things. 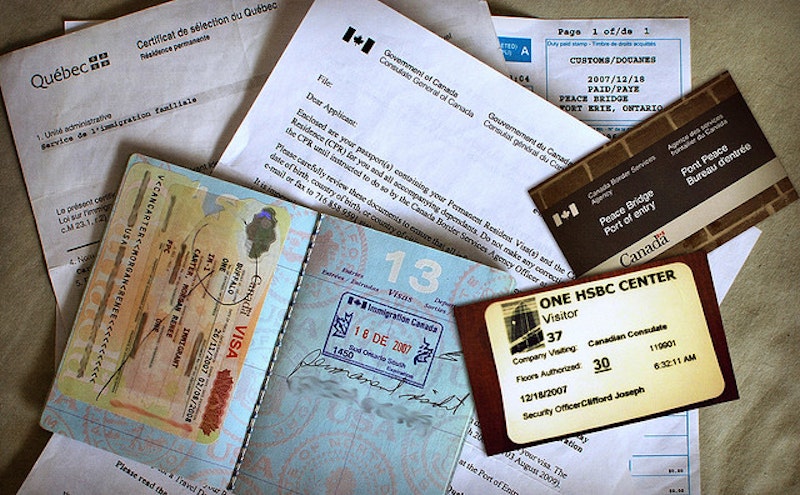 My passport runs out in October. I want to get it renewed while the government still functions—Trump, you know. But my mind and paperwork don’t do well together. I have a phobia, I think. People joke about getting triggered, but triggering does happen. I’ve witnessed it with regards to snakes and heights, and I experience it with regards to paperwork. Every year spring arrives and my mind is clobbered by three or four weeks of panic: the U.S. tax returns, the Canadian ones, the Quebec ones. This year, as a bonus, I have a winter devoted to citizenship paperwork, meaning my passport renewal and my slowly stirring attempt to become a Canadian. I’ve been sitting up here a decade and a half, happy enough holding Canada’s version of a green card. But again, Trump.

When there’s this much paperwork, and this much panic, my life becomes intermittent. During some of the most important moments of my day, it’s like I’m not there. Then I come to and must piece together the state of play. Did I decide to do this or to do that? Can I send off that form before I download and examine this guide? My mind clutches at answers, freezes around them. Sometimes my mind remains stuck that way, and I send off the form and get bad results. This time I unclutched. But the moment didn’t come until the night before my appointment at the U.S. Consulate.

Wanting to be sharp, I was looking over the document checklist for the third or fourth time. Yes, I knew I had my documents lined up, but this time I’d really know. What I discovered was that the documents in question had to be surrendered, not just presented. I’d known my current passport would be leaving my hands and traveling in the mails, but I hadn’t registered that my Canadian green card would go along with it. Canada took 19 months and three weeks to send me that card, providing a taste of limbo that I never want to experience again.

Worse, I’d feel embarrassed in the face of the Canadian bureaucracy. After they finally sent me my card, I’d have lost it like a klutz and couldn’t shake my fist at them. True, all I’d have done was send my card to the U.S. State Department, following the rules laid down by that body. The State Department would have lost it, not me. But the explanation grows thin in my brain. Canada had given me the card, and now the card would be gone. That is, if I sent it off to the U.S. and the U.S. lost it. And I’d have to run that risk if I showed up at the consulate with my papers. Get your passport re-upped through the consulate, and you must hand over government-issued proof of i.d. incorporating a photograph, and this i.d.’s in addition to the passport itself. I don’t have a drivers license, I have my permanent resident card, and… oh damn.

So ran my thoughts the night before my consulate appointment. My inclinations heaved this way and that. Stick with the consulate? The new passport and my Canadian green card would be coming back in two weeks, guaranteed. But who knew… I mean, guarantees. On the other hand, I could mail my passport in with no supporting documents, just the application, check and new photo. That’s what people in the U.S. do, and Americans in Canada get to do it too. So I was told by a set of instructions from the consulate, which sternly directed me to ignore instructions on the State Department website that limited the process to U.S. residents.

The next morning, in the gray light of what is for me the bleak hour of nine a.m., I made my choice. The act of surrendering passport and permanent resident card, both, was too big. My system wasn’t made for that responsibility. I had to whittle the act down: just my passport would go off. I’d renew by mail and wait the six weeks necessary, not go to the consulate and wait two weeks. Of course, I’d send the passport and application by special delivery, spend the money.

At the post office I discovered the total for this service came to $4 more than I’d brought. The discovery sneaked up on me. During the ring-up, the cash register’s tab stayed at $26.50 for quite a while. This was sweet news, since I’d brought along $28 and had done so after a moment’s calculation, figuring that I’d ignore the common-sense estimate of $21 or $23 and go the extra mile to be safe. The cash register took the occasion to show me I’d been right, and then to show me that, no, I was wrong again.

The couple running the post office didn’t know me, but they were nice. It’s a neighborhood place, and they decided to trust me to come back the next day. I did. But the post office is two miles away from where I live and it was snowing hard, the sort where the snow is piling at your knees and whipping at your face simultaneously. The snow was there simply because this was Canada in February. The post office was two miles away because… I don’t want to explain. Because of me, I suppose. That’s how I do these things.