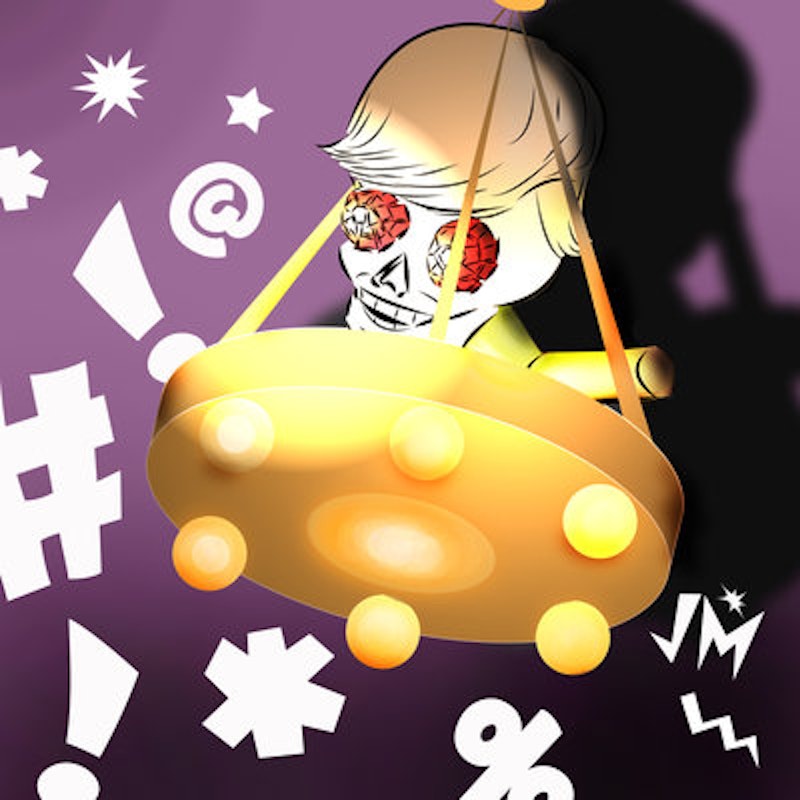 That ruby-eyed skull cufflink president big as your head has gone full-tilt Top of the World Ma from the chandelier of the toughest room in his life. Vegas oddsmakers put him out of office any day in a hail of zingers like Jimmy Cagney at a Friars’ Club roast.

Swanky is that close.

On the face of it, everything seems according to plan.

The Resistance is utterly Les Mis, making for the strangest of barricade fellows. Old CIA and Weather Underground hands are completing each other’s sentences. White Shoe Republicans and Pinky Ring Democrats are tight as Teamsters. Perhaps most bitter sweetly of all, to better understand Swanky’s base, Country Day Progressives and Hunt Club Hoity-Toities have embraced ecumenical Hillbilly Elegy studies, evolving their hot yoga of tough empathy ever higher, from just a few months ago, when Hillbilly Ellie Mae Clampett was quite enough of that sort of thing, thank you very much.

More to the point, just who is gonna get Swanky’s goat and herd it to the packing house? Which smartest aleck in Washington, New York or LA is gonna make him bawl like a baby in a loaded pink nappy? A Chuck “Rickles” Todd? An Andy “Shecky” Borowitz? A Meryl “Totie” Streep? Will a madcap “Benny Hill” Krugman dispatch Swanky’s dignity once and for all with a coup de grâce snipe at his fish fork skills and a tit joke for the cherry on top?

You might think all the glittering prizes are giddy with what’s about to go down. From devastating Swanky in the primaries, to ripping him a new executive jet in November, it’s been a non-stop Betty Crocker cakewalk easy as sneering at fish in a barrel. Yet for all that, why is the Resistance of Record so spooked?

Deep State intelligence analysts warn that an uncredentialed lone schnook will get Swanky’s goat after all. Unthinkable as it sounds, chances are overwhelming that Swanky’s undoing might be someone entirely without advanced degree, social standing, a CNN air shift, a Vineyard cottage or… front teeth!

Once the initial shock and sheer affront of analysts’ projections wore off, Resistance of Record partisans pushed back for a second opinion, certain that derisive tweets from ex-CIA Director John Brennan wearing a naughty knitted hat might be most likely to send Swanky back to his penthouse dresser caddy, shrieking like a school girl.

But no. Deeper State intel analysts confirmed that TV personalities, high-powered journalist/cell phone moguls, movie stars and distinguished professors of Homeland Economics were the least likely to rattle a ruby-eyed skull cufflink big as your head.

Uh-oh. Everybody balked when the data talked.

The most likely person to get Swanky’s goat was indeed just some lone schnook who wanders willy-nilly into the Oval Office because, well, stuff just seems to happen unexpectedly with that well-meaning Secret Service.

All the projected data suggested this lone schnook would have nothing really against President Swanky. Might’ve voted for him. Or Hillary. Or that kid on The Voice with tattoos under his toenails. Whatever, there’s voting. Lots of voting. Aside from voting, Schnook profilers paint a picture of a barebones basic dork who says dopey stuff to his buddies all the time, but hey, so long as they aren’t drinking, nobody takes it like serious, you know? No Brave Heart this schnook, once in the Oval Office, all the trappings of power would probably make him nervous in the service, so he wouldn’t look directly into those blood ruby eyes, preferring to mutter his peace under his breath at the top of Swanky’s noggin.

That’s what he’d say, insisted the analysts. We ran the supercomputer simulation over and over and got the same result every time. Your mother eats skunk cabbage sends Sim Swanky into a tailspin. For the first time in his life, Swanky looks reflective and replies, “You know, you make a very good point. Very, very good point. I have no business being here. No business.”

And then it’s over. Just like that. Just some schnook.

Washington Post Sugar Daddy/CIA Senior Partner Jeff Bezos drew a line in the sand, refusing to accuse Swanky’s mother of eating skunk cabbage. “The mother part, sure, but skunk cabbage? Not happening. No focus groups necessary. Skunk cabbage? Not clever. That sort of trash talk is beneath my pool boy and hasn’t zinged since 1931.”

Other administration critics likewise recoiled from the outrage of being bested by some hick who couldn’t schpritz his way out of a junior high school audio/visual club.

To his credit, MSNBC anchor Brian Williams stepped up to the plate and offered to report, if somebody would have his back, that he saw Swanky’s mother eat a whole platter of skunk cabbage and demand a second helping. And with that, a glimmer of failure began to keep the best and brightest of Swanky’s enemies awake at nights.

While Resistance partisans party behind overturned limos, while its balaclava-ed lieutenants plot re-educating inner city storefront windows, its older, grayer, fatter Boomer leadership sleeps fitfully, knowing that Swanky’s goat is sure to be gotten by someone entirely unfit for Canyon Ranch, that funny little restaurant in the Marais, or windsurfing off Naushon Island under the watchful eye of a gentleman’s ho-daddy.

That schnook. That bounder. That mouth-breathing Non-U Skunk Cabbage Whisperer, not that there’s anything wrong with that sort of trash except when it gets Swanky’s goat and becomes the next Woodward and Bernstein, albeit without portfolio, bespoke shirts and the whitest choppers on earth.

In their worst nightmares, Swanky’s worst enemies don’t fear the Reaper, or quite frankly, the ruby-eyed skull cufflink big as your head POTUS himself. No, something far more terrifying fuels their fever dreams, and it ain’t Welsh Rarebit.