Can Autism Speaks Redefine Itself?

A new focus on acceptance. 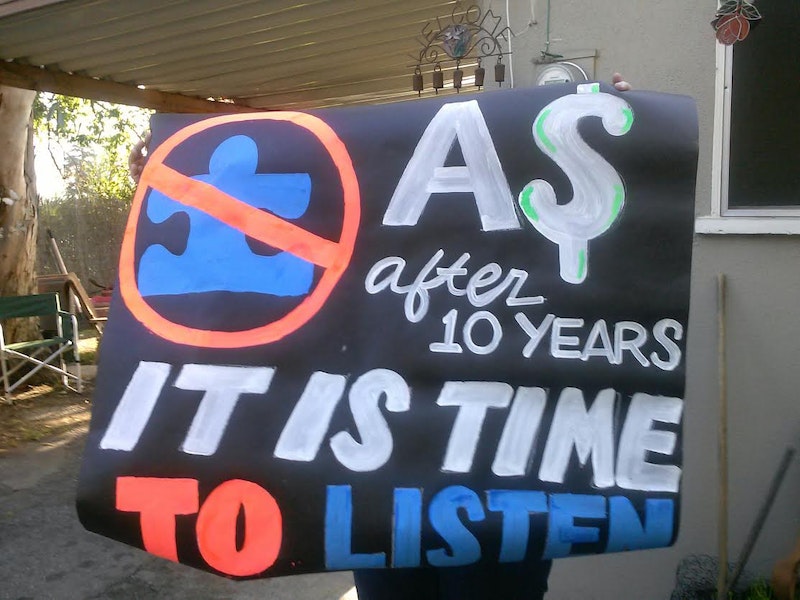 I remember passing a billboard on my way downtown. It showed a picture of a claymation boy surrounded by forest creatures. Their eyes were glowing white, overwhelming the boy with sheer numbers. The accompanying text read, “I Am Very Sensitive to Lights and Sounds” and the bottom of the read, “Sensory Sensitivity is a Sign of Autism” and a link to the Autism Speaks website. The imagery was taken from a still of a series of PSAs about autism that the organization produced. I felt conflicted, and a lot of that has to do with how Autism Speaks has interacted with the people it ostensibly represents.

After I received a diagnosis of Asperger's Syndrome, which exists at the milder end of the autism spectrum, my perception of autism shifted. A lot of quirks about me made more sense when I finally had an accurate view. But it also changed how I viewed aspects of the world that were tangential to living on the autism spectrum. The treatment of autistic people, as well as those who were more mildly impacted, became more apparent. I saw the word “retard” bandied about on the Internet by those who were more interested in shock than advancing any sort of meaningful dialogue.

The autistic community hasn’t had a favorable impression of Autism Speaks. This is with good reason, as the organization held a variety of questionable positions throughout the years. Much of the rhetoric used in ad campaigns framed autism as something to be feared. The focus was on curing autism, as opposed to offering services and advocating acceptance. There was also the idea that vaccines caused autism, a falsehood that’s lasted long after being discredited. Unfortunately, this image is what the public at large gets most of the time. Well-meaning people are duped into supporting the causes that Autism Speaks advocates without understanding the context behind them.

But after the recent passing of co-founder Suzanne Wright and the turnover of several key figures, there appear to be change. The organization has elected two autistic board members, Dr. Valerie Paradiz and Dr. David Shore. It has also revised its mission statement to focus on understanding and acceptance of autism spectrum disorders. This is welcome, but can it make up for a checkered legacy? It wouldn’t be unreasonable to maintain skepticism about the direction the organization is taking.

It’s premature to make a solid prediction about the direction of the organization, but it could be representative of changing attitudes in society. Instead of a culture where autism is feared, there could be a culture where it’s a difference to be accepted and even celebrated.