The hype behind missions to the Moon. 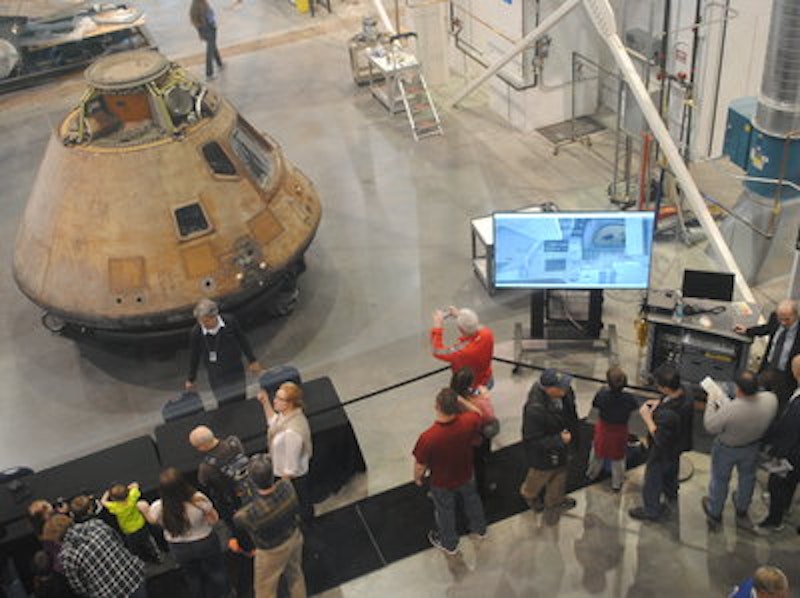 The crowds poured in to the Smithsonian National Air and Space Museum’s enormous Dulles Airport facility in Northern Virginia last weekend, many there simply to file past a conical, sandy-orange chunk of titanium and other high tech materials plopped on a circular platform on wheels.

The Apollo 11 command module spacecraft has just completed months of conservation work. Its interior was photographed in high definition. Conservators were giddy at the chance to learn the full story behind some graffiti scrawled on the inside of the spacecraft by the three-man crew of the first mission to land on the Moon, in 1969.

“NASA asked to see heat shield samples from the Apollo era,” from the Smithsonian collection, a conservator told a group swarming around the spacecraft on Saturday. NASA’s interest was in determining whether that technology would work for the new spacecraft it is building, called Orion. “They decided to use the same chemistry,” the conservator said. “The way it was done for Apollo is still the best way to do it.”

The same question is at the heart of this country’s present humans-in-space efforts. Is the new way better than the old way?

The din in recent weeks about a new objective, which was the old objective, not just from NASA but also from one of the PR-savvy commercial space entities, has arrived not exactly out of the blue. Because yet again the Moon tends to matter as a destination for humans mainly whenever various short-term agendas must be satisfied.

The Elon Musk entity SpaceX announced last week that it will send its Dragon 2 spacecraft around the moon and back next year with people on board. Rich people. At least a couple, anyway, “who have paid a significant deposit” for the privilege, SpaceX pointed out.

A couple of things to note here: that particular spacecraft has never flown. And SpaceX has yet to fly any spacecraft with humans aboard. This comes immediately after NASA announced a couple of weeks ago that it would begin a “feasibility study” to investigate adding a crew to the first flight of Orion, and of its new rocket, called SLS (Space Launch System) in 2019. Orion has flown one brief mission with no crew. SLS has not flown. It has yet to be assembled, actually. That mission’s destination would be to fly past the moon, but not to land. NASA was planning to fly to the Moon anyway with Orion, but moving up the schedule is a curious move.

NASA did this kind of thing in the 1960s a couple of times, combining various missions, but that’s because it was in a hurry to beat the Russians to the moon. The first time humans flew on the enormous Saturn V moon rocket, for example, NASA sent that mission all the way to orbit the moon, in December 1968.

Announcing various moon projects small and large is a regular event. It happened during both Bush administrations. Before, those programs never got off the ground or were canceled. The last human mission to the Moon was in 1972, long after the moon race with the Russians was won. Since then, the successes of unmanned missions to the Moon, Mars, Pluto and beyond have been impressive, while humans were stuck floating in Earth orbit. Those astronauts accomplished important objectives; they fixed satellites and the Hubble telescope, but all within a few hundred miles of the surface of their home planet.

As commercial entities have entered the human spaceflight business over the last 15 years, the marketing was all about Mars, tourists in space, innovative new vehicles, or rockets that were reusable and cost efficient. The moon wasn’t the ultimate destination. These companies and NASA itself told their stories about Mars. With occasional divergences about a trip to an asteroid. So the reason for this recent moon focus could be politics, as federal budget season has begun. The White House is involved, and speculation is that Trump’s team may like the idea of a human mission for its political benefit.

In the case of SpaceX, the moon push could be about PR aimed at investors. As SpaceX’s contract work for NASA to supply the International Space Station winds down, the limelight machine must be continually fed. Or it could be that Elon Musk wants to steal NASA’s thunder by beating it to the Moon by a year, and showing the administration and Congress that it can do it cheaper. And so if anyone could then just please cancel NASA’s humans-in-space program all together, and hand some of that cash to SpaceX, that it would be just fine with Musk. But Musk won’t get away that easily.

“Understandably, one might dismiss Musk as a crank, a once-promising visionary slowly degenerating into a Howard Hughes-like madness,” writes Eric Berger at Ars Technica. Berger does not buy this. But Musk has taken heat for various mission failures in the last couple of years. But he’s also had successes, such as returning a rocket to Earth and landing it upright, minutes after deploying its satellite payload. Re-use the rocket, save money. The rockets that flew manned missions for NASA during its heyday from 1961 to 1975 were not re-used. Not once.

In September, Musk announced that his company would colonize Mars. Remember back that far? Every few months, turn the crank. Call the media. But the media is starting to get wise. The company that Musk also enjoys making big promises about, Tesla, has missed more than 20 production and financial targets in the past five years, reports The Wall Street Journal. Tesla has sold about 140,000 cars per year since 2008, but Musk said recently he wants to increase that to one million per year by 2020.

NASA never had to worry about making a profit on the way to the Moon. It succeeded, at great cost, human and financial, in producing a vehicle that took humans safely to the moon and back. Eventually. That vehicle’s achievement can be pondered during an upcoming nationwide tour, before returning to an updated exhibit in Air and Space in Washington. Apollo 11 heads to Houston in October, then St. Louis in 2018, then to Pittsburgh, before its final stop at Seattle in 2019.

A fascinating book available at the Air and Space Museum shop is “Abandoned in Place,” a large-format collection of photos of 1960s-era launch sites, by Roland Miller. These include Pad 34 at Cape Canaveral Air Force Station next to Kennedy Space Center. That’s the launch site of the first crewed mission of an Apollo spacecraft, in October 1968. It’s also where three astronauts died in a fire during a ground test the year before, trapped in a flawed first-generation model of the spacecraft.

The remaining icon of Pad 34 is a metal structure that supported early Saturn rocket launches. A few dozen mourners and family members of the Apollo 1 astronauts who died there visit the site once a year. Nearby is pad 39A, where Apollo 11 lifted off.

Pad 39A is fully operational, however. It was recently renovated by its new tenant: SpaceX.