Who Is That Guy?

Some of the people and the streets they're named after in New York. 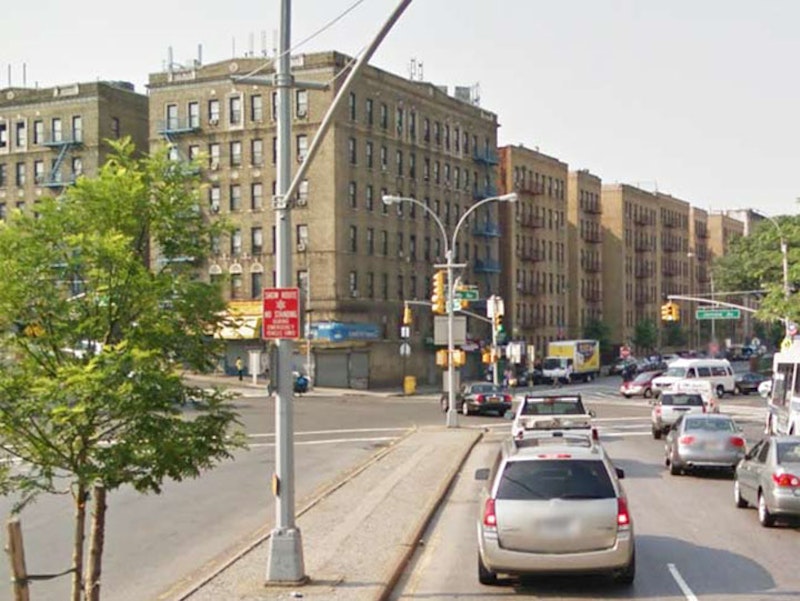 Thousands of NYC streets are named for people. Some are presidents—likely the more famous ones such as Washington or Lincoln. Often the practice is to develop a group of streets named by category, so in NYC we have flocks of streets named for astronauts, classical composers, mayors, vestrymen and other early officials at Trinity Church, the center of culture and politics in NYC’s early days. For the sake of simplicity, when the Manhattan street layout grid was conceived and surveyed beginning in 1811, numbers ruled the day with east-west streets and north-south avenues, and letters A-D in the Lower East Side.

Brooklyn embraced numbers even more enthusiastically than Manhattan—there are several systems of numbered streets there, including plain un-suffixed numbered streets and avenues in western Brooklyn, East, West, North and South numbered streets, as well as Bay, Beach, Flatlands, Paerdegat etc. numbered flocks of streets, and Aves. A-Z, which skips a few letters including the most popular one, E.

The Bronx once shared county-hood with Manhattan and continued its east-west numbering system across the Harlem River, with two north-south avenues, 3rd and Park, making it across the roiling waters. Still, both Brooklyn and the Bronx have vast neighborhoods where there are no numbers at all. The Queens street nomenclature is simple—one set of numbered streets and avenues, unlike Brooklyn. Again, there are pockets of named streets here and there. Staten Island, which is very unlike the other four boroughs, uses mostly names.

But there’s a small club of named streets in NYC that use both their honoree’s first and second names as the only designation. Post-9/11, a growing practice has been to append a name as an addendum under the main name, either on a second street sign, or maddeningly, on the same sign (those Jewel Ave./Harry Van Arsdale, Jr. Ave. signs in Flushing are hard to read).

I’m featuring here only through streets that use the first and second names of the honoree. You’ll occasionally find a plaza or park using both names, and you’ll also find honorifics (“Mother” Gaston, Father Capodanno). They’re not here. Occasionally a section of a street will be sub-named for a personality that lived there (Cruger Ave./Regis Philbin Ave.; 16th Avenue/Vincent Gardenia Blvd.). They’re not here, either.

Shown above is the Edward L. Grant Highway in the Bronx. It’s one of the few streets in NYC designated “Highway” (Kings Highway is the longest and most famous). Formerly Boscobel Ave., it was renamed in 1945 for a baseball player, but not a New York Yankee. Edward Leslie “Harvard Eddie” Grant played in the major leagues between 1905 and 1915 for the Phils, Reds and New York Giants, hardly a superstar but a workaday infielder. He was killed at Argonnes, France in October 1918, three years after his baseball career ended. Grant was the first major leaguer or ex-major leaguer to be killed in WWI action. In 1921, the Giants dedicated a plaque at the Polo Grounds in his memory; the plaque is duplicated at the Giants’ present home, AT&T Park in San Francisco. 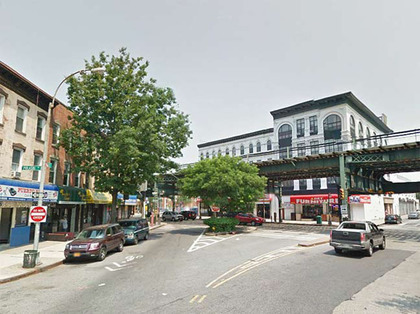 It took 20 years before a street was re-named for Malcolm X. Reid Ave. in Bedford-Stuyvesant, named for colonial-era landowner Philip Reid (who’s buried in nearby Evergreens Cemetery) was changed to Malcolm X Blvd. in 1985. Soon after, the boulevard was connected to Utica Avenue when traffic engineers created a connection at Fulton St. Elsewhere in NYC, Lenox Ave. was subtitled Malcolm X Blvd. in Harlem, while a brief stretch of 97th St. in East Elmhurst, Queens, his residence just before his death, was subtitled for him. 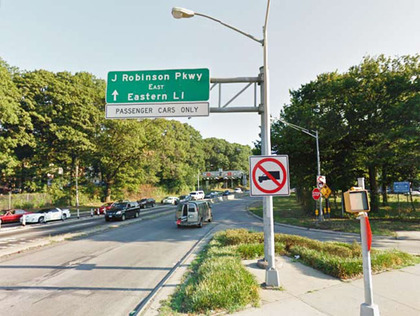 In many ways Jackie Robinson was the most compelling player in major league baseball history. Robinson was a five-tool player who hit for average, and power (averaging 16 home runs per year), possessed above-average speed, and excellently fielded his position (second base for his early years). Advancing age and diabetes slowed him down in 1956 and 1957; the Dodgers traded him to the Giants, who like the Dodgers were moving to California, but Robinson chose to retire. Robinson passed away in 1972, shortly after addressing a World Series crowd in Cincinnati. He’s interred in Cypress Hills Cemetery, through which passes the parkway later named for him. No borough-wide memorial had been named for him until 1997, when upon the 50th anniversary of his ascension to the Dodgers, New York State designated the entire route of the Interboro Parkway in his name. 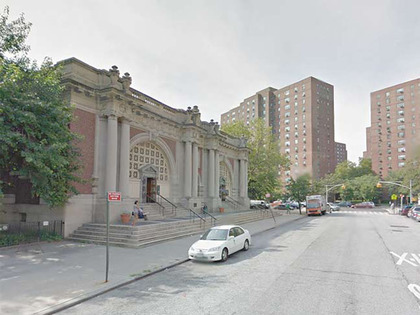 Asser Levy Place runs for just the length of two blocks, from E. 23rd to 25th Sts. west of the FDR Drive. For a short street, it’s unusually wide. It was originally laid out as part of Ave. A; parts of the avenue run intermittently from the East Village north to Harlem and are known as Ave. A, Asser Levy Pl., Sutton Pl., York Ave., and Pleasant Ave. depending on what part of town you’re in. Asser Levy was one of the first Jews in the New Netherland, arriving from Brazil in the 1650s. The centerpiece of Asser Levy Pl. is a magnificent bathhouse constructed in 1908. In the mid-to-late 1800s, NYC’s population increased dramatically in the era before running water and workable plumbing—good hygiene was an unattainable dream and communicable disease ran rampant. Public bathhouses began to appear in 1901. The 23rd Street Bathhouse (later Asser Levy Bathhouse) was designed by architects Arnold W. Brunner and William Martin Aiken and the design was based on those of Roman baths of the early Anno Domini period. It was honored as a NYC Landmark in 1974. It now serves as a recreation center and swimming pool in the warm months. Probably the largest building in NYC based on a Roman bath was the first Pennsylvania Station that stood from 1910-1963.

Asser Levy one of NYC’s first Jewish settlers. Governor Peter Stuyvesant tried to bar him from the city militia, but Dutch West India Company directors in Amsterdam upheld Levy. The city renamed this piece of Ave. A for him in 1954. 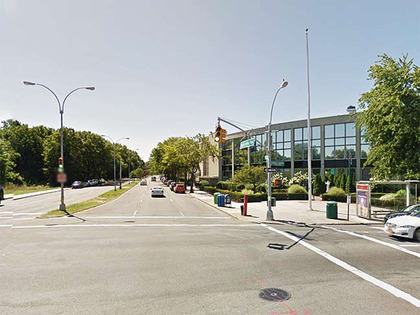 Francis Lewis (1713-1802) was a Welsh merchant who emigrated to Whitestone, then part of Flushing, in 1734. In the 1750s he entered politics, serving as a member of the New York Provincial Congress, and was later elected as a delegate to the NY Continental Congress in 1775. His mansion was destroyed by the British the following year. Lewis was the only signer of the Declaration of Independence from Queens County and is also remembered by Brooklyn’s Lewis Ave.

In the 1930s, when Cross Island Parkway was under construction, an already-extant road named Cross Island Blvd. was renamed Francis Lewis Blvd. The road was extended south of Jamaica by renaming a number of previously-existing roads.

Morgan Lewis (1754-1844), son of Francis, served in the Revolutionary War and the War of 1812; in between, he was NYDS Attorney General, a State Supreme Court justice, and NYS Governor. Lewis Ave. in Bedford-Stuyvesant, Brooklyn and Lewis Street in Manhattan’s Lower East Side are named for Lewis. 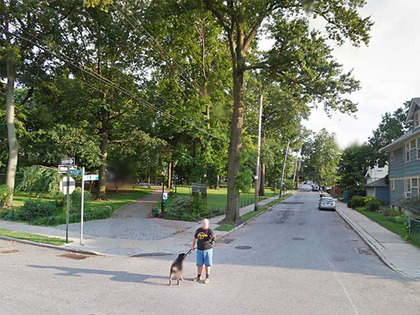 Neal Dow Ave. is one of two streets that bear the full names of prominent figures in the 19th-century Prohibition movement, in the middle of a small mid-Island town called Prohibition Park. Developed in 1887 by the National Prohibition Campground Association, Prohibition Park had narrow, brick streets and one-family houses, some of them in ornate Victorian style, many of which have survived. The neighborhood’s now known as Westerleigh.

Neal Dow (1804-1897) was a Civil War general on the Union side and ran for President on the Prohibition Party ticket in 1880, losing to James Garfield. His mansion’s a museum and can be found in his birthplace, Portland, Maine, where he was elected mayor in 1851 and again in 1855.