Who Done It? A Reissue of Benny Hill’s Only Starring Movie

Chilling with the great British comic. 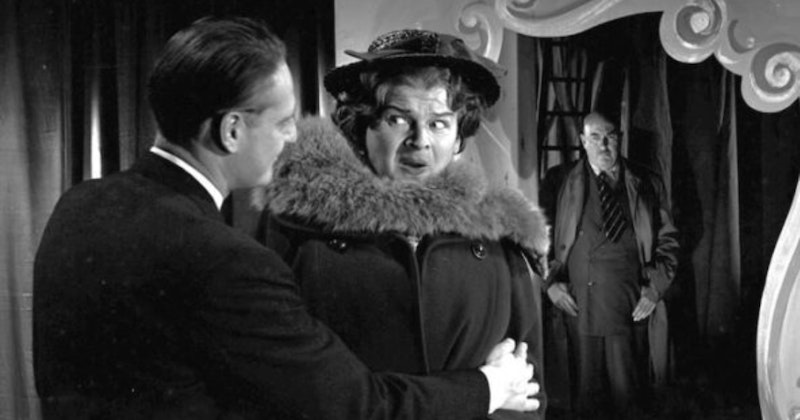 It was the perfect movie at the right time. I’d just sold my car and hadn’t yet replaced it, and was enjoying a summer without having to worry about monthly payments, insurance, or those diabolical D.C. speed cameras. My mail came to a UPS mailbox in Georgetown, about 20 miles from the place I was renting, but my rad electric power bike could make the trip. The summer heat would be brutal, but the purge of sweat was a fine post-COVID sauna.

That’s how I retrieved my new Blu-ray copy of Who Done It?, the 1956 British feature film starring Benny Hill. What better way to beat the heat than an afternoon indoors with air-conditioning and Benny? Ride down to get the mail, jump in a friend’s pool, then back home for a non-alcoholic beer and a couple of hours with Hill.

Beautifully shot in cool black and white, Who Done It? is hit-and-miss, with a few more misses than hits. Just a year into his TV career, Hill in 1956 hadn’t completely hit his stride. A farce that has elements of Chaplin (who was a fan of Hill), the Keystone Cops and the Little Rascals, Who Done It? has only occasional flashes of Benny’s genius. Much stronger is The Waiters, a 1969 short written, directed and starring Benny that is included in the new reissue.

Hill, of course, was one of the greatest comedians of the 20th century. The Benny Hill Show ran for more than 30 years starting in 1955. His millions of fans ranged from Anthony Burgess to Snoop Dogg. A master at slapstick, parody (especially of sports), mime and double entendres, Benny, who died in 1992, ran into trouble near the end of his career by a new generation humorless leftist Stasi who didn’t appreciate Hill’s saucy humor, which often featured sexy women. The new liberal hall monitors even removed him from a stamp.

The plot of Who Done It? is ridiculous. The point is to put Benny into silly situations where he can do impersonations, cause chaos, and interact with beautiful women. In this movie he’s Hugo Dill, an ice rink sweeper who becomes a private investigator after winning a contest from a detective magazine. After some cases of mistaken identity, a group of Soviet spies get Hugo to impersonate a scientist, Otto Stumpf, so they can get away with blowing up the real Otto, who has created a machine that can control the weather. Dill is helped by his blonde friend, Frankie (a beautiful Belinda Lee), a woman with superhuman strength. Conflicting with the police and disguising himself as a woman, Hugo’s mistaken for the guest star on a TV show Your Birthday Wish. The film ends when the spies steal a Watney's beer truck which is shaped like a barrel and are chased by Hugo and Frankie into a stock car race.

Many of the bits don’t quite work or go on too long, but there are flashes of the full Benny here and there. I laughed my ass off at Benny and Lee blasting through London in the beer truck, with a barking bloodhound trailing in hot pursuit.

As Bryan Reesman notes in his excellent audio commentary of the reissue, “they threw subtlety out the window with this one.” Reesman also explores the “controversy” that surrounded Hill at the end of his career. Journalists declared that Hill was “sexist” and misogynist,” with one summarizing The Benny Hill Show this way: “The show consisted of a variety of sketches in which Hill gropes a girl, and then gets slapped and then they run around to the tune of ‘Yakety Sax’, which if you are familiar with Benny Hill at all is a song that is already rolling around in your head. You’re Welcome!”

This is uncharitable, lazy and wrong. Hill did fantastic film parodies, and his quiz show spoof Masterbrane (with the great Little Jackie Wright) is still a riot. His newsman parodies show why even Walter Cronkite was a fan. Benny’s shirt-chasers were always hapless guys who got bested by the beauties around him. Furthermore, lengthy interviews with the women who worked on The Benny Hill Show reveal them warmly recalling Benny as a “lovely bloke” who respected them and fostered “a family atmosphere.” It’s amazing that Reesman has to note that Hill, an actor and comedian, was different from the characters he played.

To the new Stasi, like the old Stasi, there’sno line between real life, private life and the fantasy world of comedy and the other arts.