Servais goes to the bar for a little R&R, but is troubled by a look at the news. 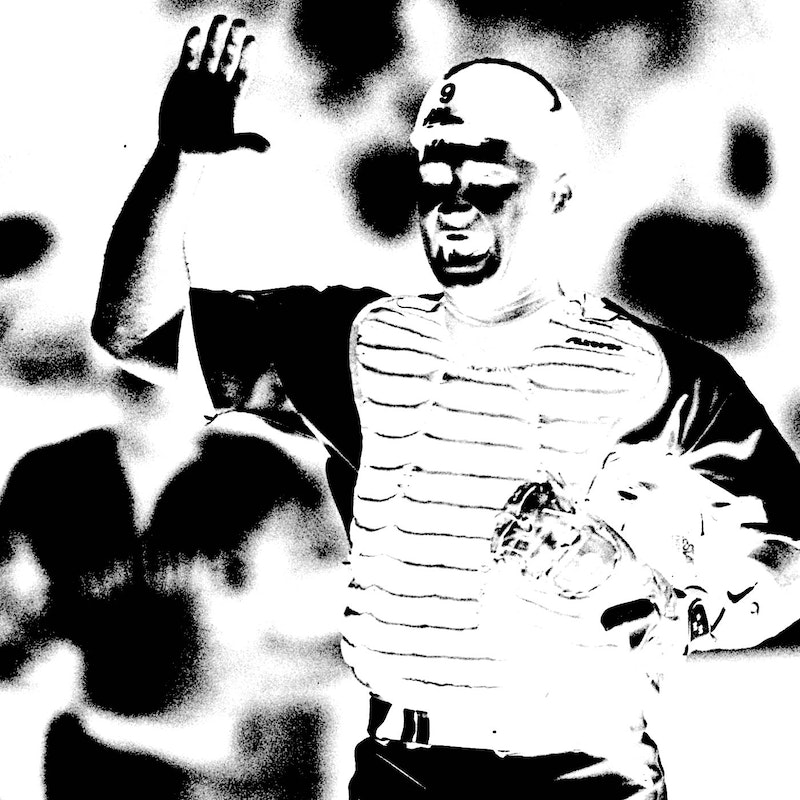 Servais had left Brian Powell alone in the room, passed out and drooling on his bed. The former Cubs and ‘Stros catcher, noted for his strong decision-making behind the plate—and for having respectable “pop” with the bat in his hands, having clubbed 13 taters in only 80 games in the ‘95 campaign, which he agreed with the stat nerds was probably his best season as a batter, all told—reasoned that his younger friend “needed the rest” after what had been an odd several days, and further rationalized that the weird, one-eyed man-thing hog-tied and prostrated in the bathtub wasn’t any great threat to the Kid for the foreseeable future. That Servais needed this to be so in order to get out to a nearby bar to meet Mookie and her sister who, as it happened, had left the city to visit their mother—and have them both to himself at that—had nothing to do with his decision to leave without telling Brian where he was going, he assured himself.

Taking a large blast of crack from the small metal stem, the former catcher hadn’t a care in the world. Blowing the pungent smoke toward a fan that whirled above the back booth in which he awaited the girls’ return from the W.C., Servais focused on the nearest TV through the intense, nauseatingly wonderful bell-ringer the crack had provided him. “TIDWELL MOURNED,” a crawler at the bottom of the news broadcast read.

“Which one?” Servais wondered aloud, though he wouldn’t have mourned any or all of them, himself.

“It the one that used to be the whatchacallit,” Mookie answered as she and her sister returned, catching him off guard. She slid in next to him, while her sister plopped down in the seat on the other side of the table.

“Defense Secretary?” Servais asked after taking a gulp of his beer to moisten his by now very dry mouth—and to help wipe away the slight frown that had flashed upon his face when Mookie and not her sister sat down beside him. Despite not knowing the other girl’s name (it was Arriel), he liked her better.

Arriel ate one of the “Overstuffed Nachos” the sisters had ordered upon their arrival, cleaning up a bit of stringy excess cheese that had escaped her initial bite with her tongue. Still chewing, she said, “Ah-hah… that one.”

Servais leered at the girl’s decolletage, disguising a lustful, caveman-like moan by clearing his throat. “You ladies want another drink?” he asked, then added, “C’mon, I’m buyin’.”

This was all the sisters needed to hear. He sent Mookie to the bar with the order, hoping to get Arriel alone so he could “shoot his shot,” as he liked to put it—this could involve anything from merely commenting on her girls tits to “whipping out on her,” as he was also fond of doing—but he was stymied when the two went together. Consoling himself with another blast and by then sucking down the remainder of his 28 oz. draft, he belched and, bleary-eyed and with gauzy, white-bordered vision, returned his attention to the TV.

Despite the din of the crowd and the music on the jukebox (“You Fill Up My Senses” by John Denver was playing), which had previously drowned out the audio, Servais found that he could now hear the words of the newscasters clearly, albeit with the slightly tunneled quality that one’s hearing takes on when very high on crack.

“I’ve gotta say, Trace, Ron Tidwell was a real shit, but it’s sad that he died such an agonizing death,” Lizz Dublin remarked in a shockingly frank manner, given both the setting and her usual slightly inebriated but otherwise professional decorum.

“Fuckin’ prick got what he deserved,” Servais said aloud, unfazed by Lizz’s swearing.

“That’s right, Lizz, and you know what? I’d like to fuck your shit rotten, you boozy moron. I mean just wear that cunt out,” Trace said with a big grin.

Lizz laughed, and Trace, too, began to chuckle, the pair of them smiling fondly at one another and then looking at the camera with warm, cheerful expressions on their faces. Servais furrowed his brow. “The fuck?” he wondered, looking around the pub to see if anyone else had heard all this.

Mookie and Arriel returned with the drinks, and Servais, having observed that none of the other patrons seemed to have noticed the odd turn the broadcast had taken, grabbed Mookie’s arm and pointed at the TV. “You hear that?” he asked loudly.

She sat down and, nonchalantly, answered, “Yeah, you’on remember we jus’ said that ‘bout the man dyin’? You burnt out for real,” with a lilting giggle.

Servais pounded his fist on the table, rattling the glasses. “Not that fuckhead dying—what they said!”

The girls looked at each other, laughing softly. “What they say?” Arriel asked, humoring him, while Mookie sought to calm him by kissing his stubbly neck.

On the screen, video of Ronald Tidwell beaming and playing happily with his newest border collie, Kemp, turned phantasmagoric and disturbing, as parts of the jovial sexagenarian’s body began to stretch, swell, warp and take on the quality of horrific, out-of-control tumors. One sprouted out of and then engulfed his right ear, while another emerged from his grinning mouth, causing the orifice to expand and the skin covering his face to tear with an accompanying sound like fabric being shorn, pus and sebum bursting forth, showering Kemp, who was now attacking his grotesque owner, growling ferociously as he sunk his teeth into a huge, bulbous growth on Tidwell’s now bare thigh, his tasteful blue slacks having split apart and fallen away in tatters.

“There’s a good boy! Are you a good boy? Yes you are!” Tidwell’s distorted, tumor-clogged voice squealed in apparent delight.

Servais, who was also known for his strong constitution and cast-iron stomach, dry-heaved. Mookie withdrew and Arriel covered her own with her hand, on the verge of upchucking.

“What the fuck is going on?” Servais roared once he’d choked back the bile enough to speak.

Tidwell’s head was now a pumpkin-sized glut of throbbing, pulsating, oozing tumors, and his doggo’s stomach had distended to a cartoonish degree. The bar’s manager approached the booth with the simpering demeanor usually employed by such people when they’re about to “politely request” that someone “stop making a scene.”

“Excuse me, folks, but y’all are…” he began, only for Servais to leap to his feet, sending the booth’s table skidding into his thighs. “Oof!”

“I gotta get outta here,” Servais kept saying, the sounds of cancerous flesh being gnawed upon and bursting open in wet explosions now seemingly emanating from within his own head.

“Let me out of the bathroom. Untie me and let me out of the bathroom,” Tidwell instructed from the TV in his distorted but calm tone even as what was left of his now unrecognizable body was feasted upon by his heckin pupper and his security detail, who were rubbing strips of flesh and big handfuls of chunky keratin all over their gleeful faces.

“Gotta… gotta get outta here…” Servais rasped between guttural dry heaves, then grabbed a chair and hurled it at the television, only for it to instead hit a patron who was filming his breakdown with her cell phone.

The girls, uncertain of what to do with themselves, tried to console Servais, but were pulled away from him by a number of customers and staff, who mostly began to try to restrain the former big leaguer, with some rabbit-punching him and kneeing him in the sides.

Brian Powell woke up with his cheek lying in a puddle of cool, slimy drool. His head ached and he started to turn over and try to go back to sleep, but then the sound of speech from within the motel room—from within its bathroom—caused him to sit bolt upright.

“Do you hear that?” he asked just above a whisper.

Realizing that Servais wasn’t in his bed, he thought perhaps the grizzled bastard had gone in there to try to brace the one-eyed weirdo. That is, to get some answers out of the man-thing that had emerged from the painting, not masturbate—though this, too, was a possibility Powell entertained. Either way, he was intent on not letting himself face the prospect that there was any reason for him to go in the bathroom.

Brian, seeking out television as the balm to soothe his troubled mind, could find only a couple of non-infomercial programs at this late hour, and so settled on a haughty sounding long-form interview show called The Intellectual Masters, with Neville Copenhagen. Copenhagen, who spoke with a highly cultivated Transatlantic accent, was the host and was in the process of introducing his guest when Powell arrived at the channel.

“…my distinct pleasure to have with me tonight an individual who, indeed, we might refer to as a master of the Socratic Method—though I wonder if he rather might describe himself more in the manner in which Plato details Socrates as having referred to himself, as the fly that rouses and bites the large and sluggish horse of Athens; of course he would be the first to tell you that the society in which he operates is certainly a far cry from that of Ancient Greece, I suspect—he is truly the most path-breaking of our most modern of art forms: posting…”

“He is, of course, the famous Blither poster, The Reverend Fartin Poother Peen,” Copenhagen concluded, looking and sounding exultant thanks to his mere proximity to this towering intellect.

“FPP,” as he was known, with his hand stuck up the front of his T-shirt, proceeded to perform a series of loud “armpit farts” with a satisfied smirk upon his face.

Just then—right at the moment when all of Brian’s mind had quieted, his fears had dissipated and he was at peace with the world—there was a powerful thud at the front door and it flew open and clattered against the wall. Powell jumped up and then stumbled, a picture of alarm.

“Where’s the freak, Kid?” a disheveled looking Servais, his clothes ripped and stained with blood, barked upon stepping into the doorway.

Servais panted and, looking at himself briefly, shook his head and said dismissively, “Most of it’s not mine.” Then, with much more concern: “Did he say anything? Have you heard anything coming out of the bathroom at all?”

As both the men now stood silent, straining their ears for any sound that might be coming from their “guest” in the bathroom, The Reverend Fartin Poother Peen said on the television, “Well, Neville, I think that, like, performing a monologue in armpit farts is the perfect artistic and political statement for the times we live in. Don’t you think so?”