When Your Wife Won't Read Your Book

The heartbreak of indifference. 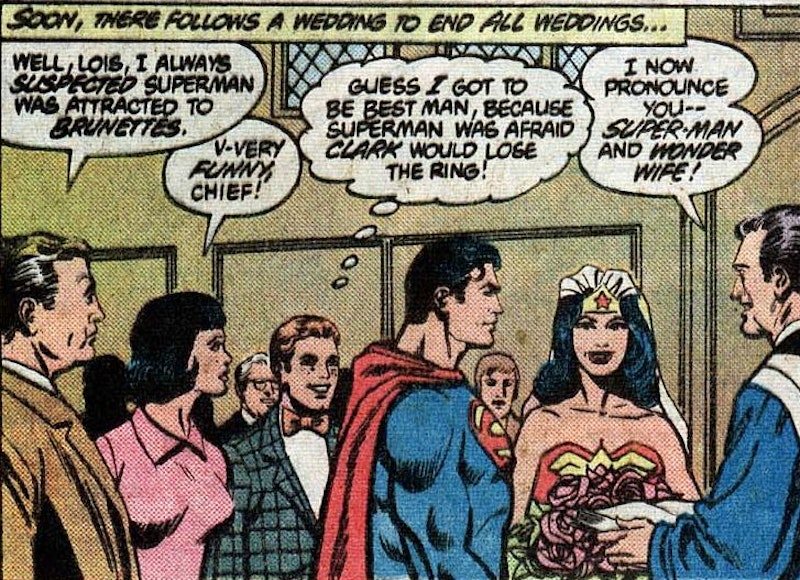 My wife took our son to the local comic store, First Aid Comics, to get the latest issue of Ms. Marvel. As it happens, I'm doing a reading at First Aid Comics this week. My wife glanced at the poster for the event, and the proprietor, sensing interest, encouraged her to buy a copy of Wonder Woman: Bondage and Feminism, and come back on Wednesday to get it signed by Noah Berlatsky… himself!

My wife smiled, and replied, "He's my husband. I can have him sign a copy of the damn book any time I want."

My son thought this was hilarious, since he's well aware that Mommy is not supposed to curse, especially not at Daddy's business associates. I thought it was funny too, though with a slightly painful edge. The sad truth is, my wife has little interest in having me sign her book copy. In fact, my wife has little interest in, or active antipathy toward, reading my book. She’s spent almost three years not reading the manuscript, and now that it’s actually in print, she’s determined to not read it.

Why won't she read it? I’ve asked. She says that she's heard me talk about it so much that she already knows everything in it… which is sort of reasonable. But I remain unconvinced. After all, I've been writing about Wonder Woman for years now online; there are lots of people who know what I have to say about it. But many of those people have read the book anyway, or at least have claimed that they hope to read the book someday. Admittedly, these are often friends and colleagues; they have a personal interest. But then, you'd think my wife would have a personal interest as well.

Probably more important is that my wife is just not very taken with Wonder Woman, or at least not with the original Marston/Peter comics. She does have some nostalgia for the Lynda Carter television show, but it apparently does not transfer over. My son read a bunch of the original Wonder Woman comics with delight; he loves the always-eating comic relief character Etta Candy. But my wife remains impervious to their charms. No amount of discussion of multi-lunged space kangaroos can convince her.

Even a general antipathy to the subject matter doesn't explain it, though. The harsh reality is, my wife doesn't read most of my writing, whether it's about Wonder Woman or not. Occasionally I'll want her opinion on a draft and get her to read it (she read part of the book introduction for that reason.) But day-to-day, unless I specifically tell her I've written about our son or cat, she tends not to bother.

I’ve explained that this is a failure of the system of spousal support and encouragement on which marriages are predicated. She remains unimpressed, and since our marriage doesn’t seem to be crumbling, I guess she's got a point. And, to be fair, I don't regularly show up at my wife's workplace to praise her efficiency and approve her efforts. Writing is odd, in that it's supposed to be personal and of general interest, even if it's just another job. And, as everyone who's had one knows, day-to-day jobs aren't especially exciting. Yes, you need to be willing to talk about your loving significant others' employment to some extent. But you can see why reading a 200-page book about Wonder Woman might be an excessive demand.

I'm still hoping she’ll go to one of my readings. Or at least, I'm hoping that if she has to curse in front of the people hosting my readings, she can stick to "Sufferin' Sappho!"