A Good Landlord Is Hard to Find

Everyone's always trying to get one over on you. 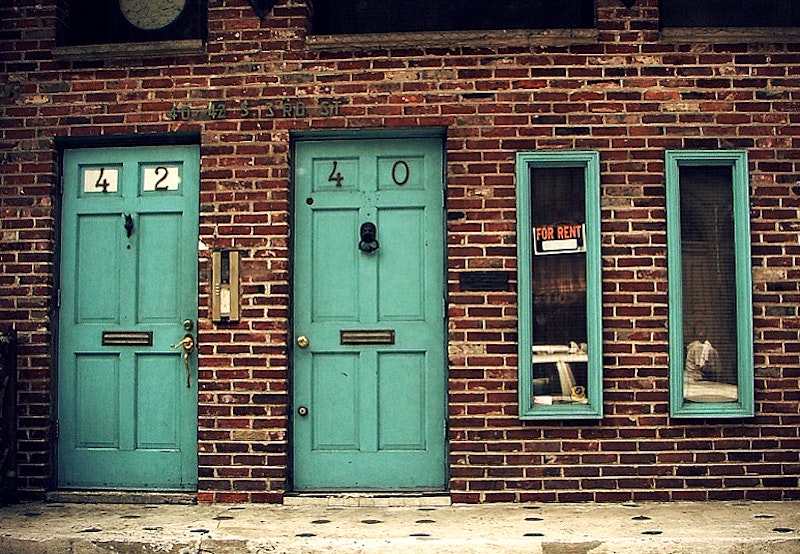 You can’t be too careful these days. Forrest Gump was full of shit: life is not like a box of chocolates. It’s like a hit of LSD—you never know how weird it’s going to get until it’s too late to do anything about it. Environmental disasters abound, the global economy is on the brink of collapse, the USA seems to be at war with the world while waging a slow-motion race war against black people at home, weird plagues are breaking out everywhere, and I just can’t seem to find an honest landlord.

I’ve moved around a lot in my life, and whenever I check into a new town, I prioritize three essentials: an honest lawyer, an honest mechanic, and an honest doctor. I feel lucky to have fulfilled two-thirds of that agenda. Finding a doctor who isn’t merely a mercenary pill-pusher is tricky here in the raging maelstrom of the 21st century. After 10 years of bad landlords, it’s hard not to arrive at the conclusion that finding an honest landlord is like finding an honest man inside the Beltway.

The best landlord I ever had was a father and son outfit in Manhattan, Miller & Miller. Old man Miller collected humor books, his office was stuffed with them. I met them through my wife, Bonnie. Her ex-husband, Chris Claremont, the genius behind the X-Men, had a longstanding relationship with them and gave a recommendation when we moved back into the city from upstate in 1981. They had a property manager named Paul Francis, who was one of the most decent, compassionate, and courteous people I’ve ever met. There was never a problem with those folks.

Since leaving New York in 2005, every landlord I’ve had has been some variation on criminal or negligent, usually both. There was the meth-dealing identity thief in Kansas, the smash-and-grab looting eviction experts in Vegas, and that unspeakable Ayn Rand fanatic in Mountain View. I’m sympathetic to Libertarians. I registered Republican in 2012 so that I could support Ron Paul. I certainly don’t agree with him on all things, but he’s honest. I’ll support an honest man with whom I might disagree over some smarmy crook who’ll say whatever he thinks I want to hear. The problem with the Libertarian position mirrors the problem with Marxism: greed. I favor a more moderate approach. There’s a very good reason why the Scandinavian countries enjoy the highest quality of life on this planet. They provide their citizens with all of the incentives of capitalism and the fully functional safety net of socialism. In order for people to succeed, they need to be able to fail without winding up sleeping under a bridge and starving.

I had a fascination with serial killers before the term even existed, long before it became fashionable. One characteristic I noted with interest was that they all shared the common trait of viewing life as a zero-sum game: in order for someone to win, someone else must lose. In evolutionary terms, that’s a dead end. Our species didn’t get to the top of the food chain by competing with one another. We are the weakest of the Great Apes. We got here by cooperating with each other, by using our fantastic communication skills to form successful social networks advancing win-win scenarios in which each member of the network reaps the benefits of cooperation by coming home with more plenty at the end of the day than they could have gathered on their own. That’s the whole point of human society.

I had a wonderful conversation with a local grocery store manager yesterday. The place is called Fresh Market, and it’s beautiful. The food is largely locally-sourced. The employees seem happy. I was complimenting him on this, and we got to talking about WalMart. Since my arrival in Gainesville, I’ve been so skint that I actually took to buying my beer at WalMart because it’s the cheapest source in town and survival overrides ideals sometimes. I noticed that every time I went into WalMart, I came out feeling soiled and mildly depressed, and realized that I was picking up on the miasma of despair emanating from the employees there. I immediately stopped shopping there. I’d rather take the hit and spend an extra buck or two than participate in an evil feudal scam. There are an estimated 510 WalMarts in this country. Because of the shitty wages and benefits they offer, each one of those stores is subsidized by the taxpayer to the tune of $900,000 to $1,200,000 per year. That’s something approximating a $510,000,000 annual subsidy for the wealthiest family in America. Contrast that with Costco, whose employees earn a minimum of $19.50 per hour with full health benefits and whose CEO pays himself a very reasonable $550,000 per year.

Radical capitalism run amok is rapidly birthing a resurrection of national socialism and communism, as well as the more obvious manifestation of radical Islam, a religious doctrine inherently opposed to corporate oligarchy.

Getting back to my local situation, I was puzzled by my consistently outrageous utility bills. I live in one of four Quonset huts owned by my landlord, each one divided into two units, each approximately 500 square feet. Aside from ramen noodles or the occasional can of beans, I don’t cook. My only electronics are my phone and laptop. I refuse to have a television in my house. I called Gainesville Regional Utilities and requested a free inspection and audit. As it happens, each of the huts has only one gas meter. In each, one tenant is getting free gas and the other is paying the bill for both. The landlord represents to the non-paying tenant that free gas is part of the package. Apparently this is not a criminal offense. These guys also have a reputation for not refunding security deposits. My lease is good through September, and my new lawyer is a pit bull.

I’m disinclined toward violence, but I do have an app for dealing with predatory people: it’s called the Necronomicon. Yes, it’s bogus—I was involved in its creation—but it works. Crazy world, right?