When the Nazis Were in Power 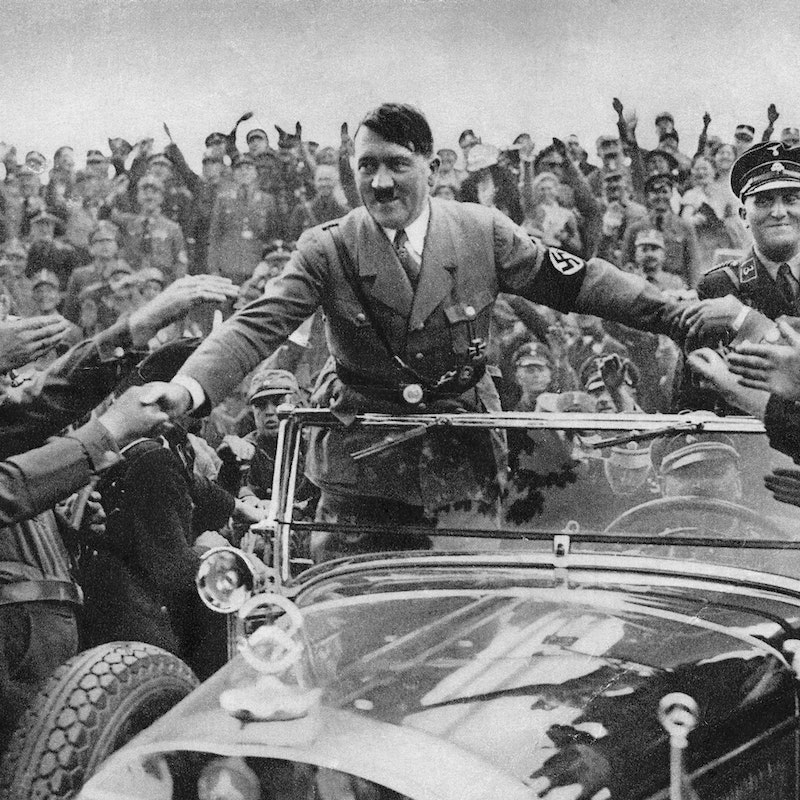 Look out the window when driving down the parkway and then try to recall the different trees you passed. The history buff who finishes The Third Reich in Power is in a similar fix. Richard J. Evans, a retired Cambridge don who’s one of the world’s best-known experts on German history, has perpetrated a great square volume founded on the mountain of scholarship (most of it by Germans) that he has mastered. The book is one of three, all of them immense and detailed. The first tells how the Nazis came to power; the last describes their disastrous attempt at making Germany into the overlord of the West. The middle book catalogues what they did to Germany before making their try. If you want to understand the Third Reich, reading this book will get you a long way there. If you want to feel like you understand the Third Reich, stick to the History Channel.

Evans’ portrait of the German 1930s takes in politics under the Nazis, military developments under the Nazis, political repression under the Nazis, racial persecution and pseudo-science under the Nazis, and also movies, pharmacy, farming, charity, architecture, labor relations, vacation habits, theater, and big business under the Nazis, to list only some of the topics. Of course, no one can cover everything. What about accounting and pro sports, not to mention forestry and narcotics? But what we get is enough for an up-and-down, inside-and-out picture of a society manhandled into a horrible new shape. Evans writes in academic prose that’s clear and moves well, with only occasional wordiness, and he writes as someone who wants to establish probable truth, not sell an argument or impose a story.

Still, one feels the need for some learned and kindly person to step in and do what Evans doesn’t, which is to spell out how the subject's many trees map into a forest. First, there’s the mystery of how the regime settled decisions, or at least those smaller than the persecution of the Jews and the conquest of neighboring countries. Nazi rule featured a great number of turf fights, with different bureaucracies battling for control of one chunk or another of German life. When Hitler stepped in, Evans says so. (It was Hitler who decided that fraternities had to go; they were too gay.) But what about all the other times? The book’s description of a typical Hitler workday makes no mention of refereeing. Perhaps he had Goering and Hess take it in turns. Evans doesn’t let us know, so our picture of the Nazi system has a big blur lodged in it.

An overview of events would’ve been good too, or at least a more detailed overview than the one that rounds out the book. The chapters proceed topic by topic, from police state to propaganda to religion, and so on. This makes it easier for the writer to get into detail, but help is needed with seeing how the material adds up. A big fat chapter at the start could’ve laid out the upcoming matter’s significant events in the order they happened and with some attention to the relations among them. It’s one thing to impose a story, another to rescue it from behind the data.

To read Evans and then trace Nazi Germany’s course through the 1930s means to glean hints and then put them together. Here’s what I have. In 1933, Hitler and the Nazis crushed Germany’s left, giving the right sole possession of the country. In 1934, Hitler destroyed those of his enemies who were on the right, meaning the leaders of the gang of thugs that had done his head-cracking for him, plus various mouthy and/or treacherous politician-aristocrats left over from the old days. But even before this he’d started branding the swastika on German life. From the beginning Hitler meant to make German society more brutal, and he meant to do so by calling the shots in all areas of the typical German’s existence. His regime traveled a long way toward that goal and covered the ground quickly. Still, it never reached its destination. The Nazis wrapped society up, but they never got the string around the package. Terrorize, direct, and coerce as they might, the tyrants sometimes had to worry about public opinion, and this catch queered Hitler’s deal.

His chief goal had always been to conquer land to the east so that the German race could settle it and spread across the map. But at first the dictator planned for a long war, one that would be fought sometime during the next decade; by then, he figured, Germany would’ve become economically independent of every nation not directly under its thumb, thus positioning itself for a giant war of supremacy. That prospect proved too far away. The population’s finances had improved since the Depression, but life was far from easy, not least because of various financial demands placed on the people by the regime. Now the public needed some abundance fast if it was going to stay more or less content. To use Evans’ word, Germany needed “plunder.”

Invading the east, Evans tells us, was expected to “deliver wealth on an unprecedented scale” and “solve all Germany’s economic problems at a stroke.” The historian writes: “The enormous stresses and strains built up in the German economy between 1933 and 1939 could, Hitler himself explicitly argued on several occasions, ultimately only be resolved by the conquest of living-space in the east.” Lebensraum was now not just the key to the German people’s destiny; it was also a fast way out of a jam. Accordingly, Germany had to go to war sooner and not later.

By the late-1930s, Hitler was sinking German finances deep in the red as he flogged labor and industry to churn out the needed armaments. His spending made the need for conquered real estate that much keener. The dictator’s hope seems to have been to do a series of successful country-rapes, as opposed to settling continental supremacy all at one go. This hope didn’t quite pan out. He faced down the Western powers over some smaller parcels of land, such as Austria and the fringe of German settlement around Czechoslovakia, followed by much of the remaining country. Having sufficiently alarmed the West, Hitler then crashed into Poland and grabbed more land. He figured Britain and France would do nothing. He was wrong and the rest is World War II. But here I jump to Professor Evans’ next book and the many details that lie ahead.