When Science Was a Bento Box

A requiem for my chemistry set. 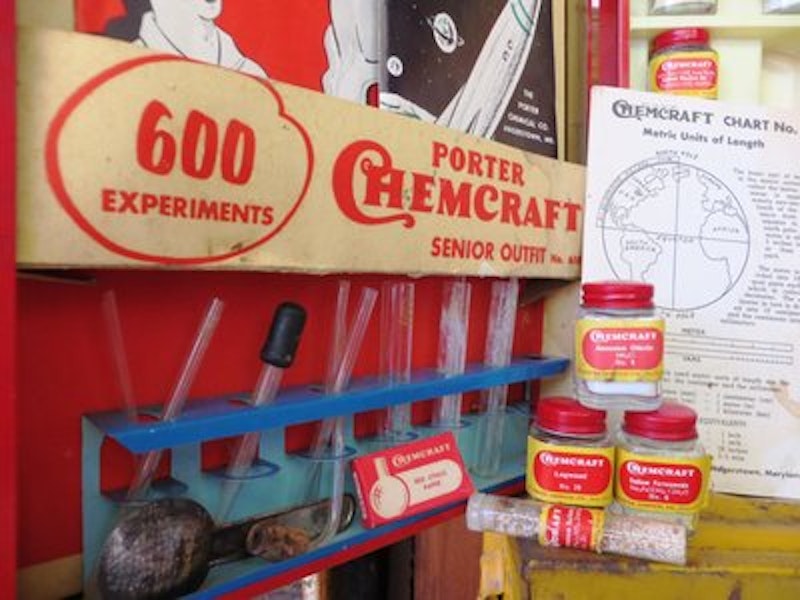 I fell for chemistry sets like some Boomer kids fell for Erector Sets and Lionel trains, which is not to say I didn’t fall for those too, but I didn’t get my chemistry set until a little later, fourth grade to be exact, when at last I was in heaven.

For a while, that is.

Though I didn’t know from Bentos at the time, the cool sub-divided TV dinner tray containment appeal provided by my Porter Chemcraft set was likewise the nuts. Not that the little jars and vials of chemicals and HO scale lab apparatus lacked for individual charms. Nevertheless, the cat’s ass cake’s icing was the latched, hinged metal triptych panels of sub-containers, row by row of nesting places for every chloride, sulfate, test tube and alcohol lamp.

About that alcohol lamp. Funny, I recall asking my parents to buy its fuel repeatedly, until it became clear I’d have to make do with the official Chemcraft candle. Hey, any open flame in a storm, right? Which brings us to all chemistry sets’ dirty little secret. Their deepest appeal was the chance to play with fire in the privacy of one’s bedroom­—in the name of science, of course.

Don’t get me wrong, I loved all the exotic chemicals, especially bright yellow powdered sulfur and vivid blue copper sulfate crystals, plus the test tubes, glass tubing, rubber stoppers and sundry scientific jazz. I puzzled over the pronunciation of the clear liquid Phenolphthalein, which I roughed out in my head as Fee-Noff-Flee-An, and subsequently lacked an opportunity to repeat my fractured take out loud until much later, when I busted up my high school chem class, to my withered teenage chagrin.

My chemistry set came with a booklet of so-called experiments that were nothing of the sort. The booklet enumerated chemicals, A, B, C, and so on, specifying exactly what X, Y and Z would take place if you did L, M, N, O and P and all the other BS between.

Huh? That’s not science. That’s planning your own surprise party.

I ditched the instruction manual fast as a healthy snack. For me, science personified was Gyro Gearloose, my Donald Duck comic hero who mixed everything with wild abandon and got lucky every single issue to foil Donald’s nemesis, the Beagle Boys. In that spirit, I played equally fast and loose with all the chemistry set fixins’ and nothing much happened at all. A little fizz. A little cloudy precipitate. Nope. There was more action stirring Bosco chocolate syrup in your milk at dinner. I quickly discovered that real science didn’t start until you played with fire. And made a stink. Or turned a flame green. At last, I was finally getting no place. Because there was nothing else to chemistry sets, at least for a freestyler like myself, but more of the same, aside from the learning how to burn yourself over and over.

Now that was interesting. Like getting burned by bits of bubbling molten sulfur as it cooked in the measuring spoon. Or getting burned by glass tubing heated hot enough to bend.  Or by molten wax dripping from the candle. Or using the chemistry set as a duck blind behind which to hide while snuffing out candle flames with your fingertips. Candles, man.   Before long, you moved up from toasting sulfur to annealing pennies gripped in pliers’ jaws and dropping them into a pretend acid bath and by then you my friend, were off to the races.

From that point, until fifth grade, I only knew two kinds of kids with chemistry sets. For some kids of very disappointed parents, they were the toy equivalent of liver and lima beans, without benefit of Heinz ketchup. For some others, the few, the proud, know-nothing mavericks like myself, chemistry sets were used up willy-nilly and eventually cast aside in favor of more compelling studies involving plastic airplane models and lighter fluid.

Until that year, a third type of chemistry kid escaped my radar, when a group of classmates and myself who spoofed standardized tests were pulled out of regular classes once a week for real chemistry lessons. It had something to do with the National Defense Education Act of 1958, which had a lot to do with the Soviet Union launching Sputnik, the first artificial earth satellite. It wasn’t overtly pitched to us as anything but scientific, but back then a bunch of us fifth graders read newspapers, and we caught the drift all right. We were going to Cold War.

Blast off! At last we were doing something about Russia besides duck and cover in the school corridor. Would I get to play with mercury? Would there be sparks as big as Frankenstein? What fun! Or so I thought, until we started talking covalent bonds. All around me, smarty-pants hands flew up in the air. Did they do chemistry sets too? Did they read the instruction booklet? I didn’t remember these kids talking chemistry sets. I didn’t recall those girls boasting about making stinks. Yet everyone around me seemed to get it and get it all. The energy levels. The periodic table. I followed the words, which is to say I could parrot the terms, but applying their technical meaning bewildered me. Never until that terrible moment was I the class dope. Me! Dr. Chemistry Set, up Shit Creek without a lab coat.

I suppose I assumed understanding was simply a matter of possessing a science Bento, just a slightly more sophisticated, Superman-themed lunch box and Thermos ensemble. Tell you what though, that chemistry set taught me a little Old Line geography I’ll never forget.

Hagerstown, Maryland was the home of Porter Chemical Company, manufacturer of my Chemcraft set. Because of that, because one could re-order chemicals and lab accessories from Hagerstown, I daydreamed about how nice it’d be to live there, to browse the company store, and flesh-out my chemical inventory with some of their sexier substances. I made lists, checked them twice, yet I never finally licked the stamp and sent away, in those final years before ZIP codes. If I did that, there must have been thousands of far-flung little kids similarly mooning over Hagerstown.

While Porter went out of business in the 1980s, Hagerstown stayed with me. I’ve thought of it warmly, if abstractly, now and then all my life. And when I do, instead of Proust’s madeleines, I imagine I smell a tablespoon of melted sulfur on the bubble over a candle, steps from a bunk bed, still.