What Joan Didion Did to Woody Allen

Nobody ever told Hollywood. 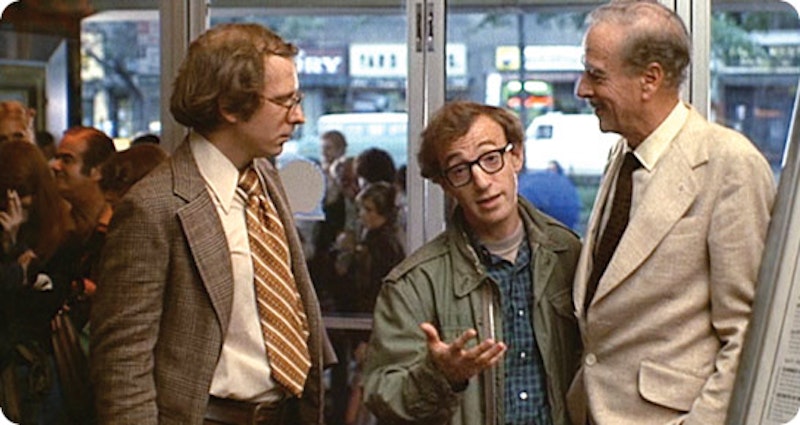 Thirty-five years ago Joan Didion dropped a paragraph on Woody Allen the way a small boy drops a rock on a spider. Ever since, any thought of Woody Allen as artist has been squashed flat in my head. Here's the paragraph about halfway along:

“Are you serious about Tracy?” the Michael Murphy character asks the Woody Allen character in Manhattan. “Are you still hung up on Yale?” the Woody Allen character asks the Diane Keaton character. “I think I’m still in love with Yale,” she confesses several scenes later. “You are?” he counters, “or you think you are?” All of the characters in Woody Allen pictures not only ask these questions but actually answer them, on camera, and then, usually in another restaurant, listen raptly to third-party analyses of their own questions and answers.

This was in The New York Review of Books, a heady place for those who love pronouncements. Stalking through its pages, Didion showed a certain pomp. “Self-absorption is general, as is self-doubt,” she began, eyebrow arched like Sub-Mariner. She proceeded with an airy, proprietary sense of doom, as if doom was her special friend and she was being seen at his elbow. Even so, she was on to something—boy, was she.

People who like Allen have to put up with such dry bread in the way of writing. His characterization and dialogue could break a viewer's tooth. Put him in a room and Allen sees less than most people, and what he sees he then spells out with alphabet blocks the size of a desk. Thud, thud, thud, the insights land. Further along in Didion's paragraph:

“How come you guys got divorced?” they ask each other with real interest, and, on a more rhetorical level, “why are you so hostile,” and “why can’t you just once in a while consider my needs.” (“I’m sick of your needs” is the way Diane Keaton answers this question in Interiors, one of the few lucid moments in the picture.) What does she say, these people ask incessantly, what does she say and what does he say and, finally, inevitably, “what does your analyst say.” These people have, on certain subjects, extraordinary attention spans.

Allen has won three Oscars for best screenplay and has been nominated for 13 others. Didion has received zip as far as Oscars are concerned. It beats me. For 36 years, every new Allen film I've seen has been lumpy when it comes to everything done at a typewriter. The good lines crop up once a decade (“Remember the special lyrics about the moon walk!”), the bad lines pelt against your head (“If Jesus came back and saw what's going on in his name, he'd never stop throwing up”). The characters are dressed in galoshes and sandwich boards; they shuffle about, their motivations and dilemmas banging their knees. “For all my education, accomplishments and so-called wisdom, I can't fathom my own heart,” says one, and that's in a script that won an Oscar (Hannah and Her Sisters, 1987).

Didion's essay, having squashed Allen, moved on to its next paragraph. This had to do with Allen's belief that an hour a day of analysis would build up your psyche the way a fitness routine builds muscles. Allen, she considered, looked on the self “as a kind of continuing career—something to work at, work on, 'make an effort' for and subject to an hour a day of emotional Nautilus training, all in the interests not of attaining grace but of improving one’s 'relationships.'” Kid stuff, in her view. The world of Allen’s movies was just high school populated by adults, she said—“their concerns and conversations are those of clever children, 'class brains,' acting out a yearbook fantasy of adult life.”

From there she went back to grinding Allen-as-screenwriter into the ground:

These faux adults of Woody Allen’s have dinner at Elaine’s, and argue art versus ethics. They share sodas, and wonder “what love is.” They have “interesting” occupations, none of which intrudes in any serious way on their dating. Many characters in these pictures “write,” usually on tape recorders. In Manhattan, Woody Allen quits his job as a television writer and is later seen dictating an “idea” for a short story, an idea which, I am afraid, is also the “idea” for the picture itself...

Admittedly, I don't know why self-as-career is kid's stuff, necessarily, as opposed to being an all-ages sort of foolishness. Teens worry about their bodies and making an impression—I mean, they do that even more than we do—but they're not too concerned about processing relationships. On the other hand, Allen adults do seem like adults imagined by children, or by someone very clever who has spent his life off to the side of adulthood, working techniques instead of feeling and listening. Allen's freakish shortcomings have been evident for decades. Didion was the first person to bring them into focus, and the Motion Picture Academy will be the last to find out.